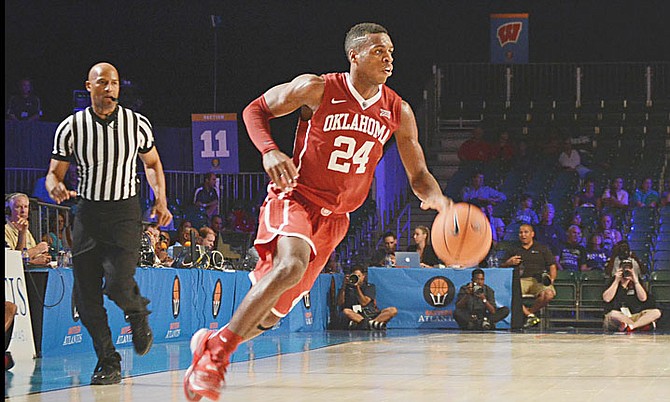 BUDDY Hield couldn’t have scripted a better homecoming for his tournament debut at the Battle 4 Atlantis.

Playing in his first meaningful game back in the Bahamas since his high school days with Jack Hayward, Hield scored a game high 24 points to lead the Oklahoma Sooners to a 75-65 win over the no.22 ranked UCLA Bruins.

The Sooners advanced to today’s semi-final when they face the Butler Bulldogs at 1pm.

UCLA will face North Carolina tonight in the evening session at 7pm.

The 6’4” guard scored 15 points in the second half as the Sooners overcame a late eight point second half deficit.

“It was real special be home and to come here to play for my family and friends,” he said, “It reminded me of back in the days on the parks playing ball when I was younger [because] in the game I could hear my brother shouting. I could hear him louder than anyone else in the arena. It makes playing back home when of the best atmospheres and I haven’t had that in a long time, since high school in Hugh Campbell, or at the Jack Hayward gym.”

In the second half, UCLA built an eight point lead when Issac Hamilton made a runner, followed by a corner three pointer for a 57-49 advantage.

Hield then found his touch from distance and scored 10 unanswered points for the Sooners to reclaim the lead.

He forced the issue at the offensive end, and made four consecutive free throws to spark the run.

Following a steal from Jordan Woodard, Hield made a transition three to bring the Sooners to within one , and took the lead with another three pointer on the ensuing position for a 60-59 lead.

“We had our heads down and I thought to myself ‘just can’t let this happen,’ I had to attack more, my shots started falling and I got in a groove, but I give credit to my teammates for giving me the ball in good spots.”

TaShawn Thomas’ reverse layup on the baseline gave the Sooners a 67-60 lead, but the Bruins responded with consecutive scores to pull within four.

Hield would again deliver an emphatic answer with a three pointer to stop the UCLA run and give the Sooners a 70-64 lead.

“Each team had momentum at different times, Buddy made some critical shots at the right time and I’m happy for him to come home and celebrate a win like that,” Sooner head coach Lon Kruger said, “It was a good learning opportunity today.”

Hield was one of three Sooners in double figures along with 11 points from Frank Booker and 10 from Woodard.

For the Bruins, fellow Bahamian Wanaah Bail finished with one point and three rebounds in nine minutes.

Bruins head coach Steve Alford said his team continues its growing pains after losing four players to the NBA draft, but he remains optimistic in the development of his young talent, including Bail.

“I like the way our guys competed, it is now for alot of these guys but I’m seeing alot of positive things. We have a bench that is developing.We’re not going to be the team we want to be at Thanksgiving. I like the pieces that we have and I’m seeing alot of things from guys that don’t have alot of experience,” he said, He [Wanaah] has been tremendous, He’s a great athlete and it’s great getting him back home with a chance to play in front of his friends and family that’s terrific. He runs, blocks shots, rebounds, that’s his role on the team and he’s developing a great role for us that we will need.”