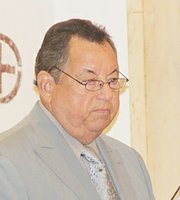 FORMER Progressive Liberal Party Cabinet Minister George Smith yesterday welcomed the party’s decision to postpone its national convention until next year because the country is currently faced with many important issues.

PLP Chairman Bradley Roberts told The Tribune last week that the convention, which was scheduled to take place next month, will happen after the constitutional referendum on gender equality, which is slated for sometime next year.

That decision was made during a meeting last week between high-ranking PLP members, including parliamentarians.

It is expected that the position of leader, deputy leader, national chairman and PLP trustees may be contested when the convention is held next year.

“I don’t think there is any restlessness in the party for the convention to be held,” said Mr Smith. “People will accept this postponement. They respect the fact that the referendum will take precedence.”

As rumours of the convention’s postponement spread on social media recently, some suggested that it reflects a lack of confidence among PLP leaders over the security of their positions as the Christie administration faces frequent criticism over a variety of issues.

In particular, it has been suggested that the PLP would face many questions relating to the crime rate and high electricity bills after campaigning in 2012 on a mandate to address these issues.

Mr Smith, however, said the PLP has always faced its challenges up-front.

“The PLP has always been able to muster the courage to face any problem it confronts,” he said. “These issues are insignificant compared to what the party has had to face over the years and it didn’t back down from facing them.

“It’s in the national interest of the country to postpone the convention,” he added.

Since Mr Roberts announced in February that a convention would be held in November, mini-conventions have been held in the Family Islands. These will continue until the main event is held next year, Mr Roberts said.

“The mini conventions have took place and will continue to take place,” Mr Roberts said last week. “We are going to Exuma in November to deal with party members and focus attention on the island concerned.”

He added that the ritual “prayer breakfast” which proceeds conventions will still take place next month as planned in order to “pray for the success of the party.”

Mr Roberts suggested that there is widespread agreement within the upper ranks of the party that the convention should be postponed.

“Given the reason for the postponement, I don’t think any female counterparts would take any umbrage with the postponement. As for the men, I can’t see them not being supportive of the women. We urge all the men to stand up and do this necessary thing, not only for the party, but for all members of society.”

Now we know what Frank Smith's face is gonna look like in a few years time!

The PLP has always been able to muster the courage to face any problem it confronts,”

Well...except for Renward Wells, but Brave Davis could probably explain since he understands why Renward dud what he did and Why sitting members resort to various temptations to earn money...weird, he seems to understand a lot of unethical borderline criminal behaviour...

In the name of Beelzebub your God........Get your crooked ass back to your tomb!