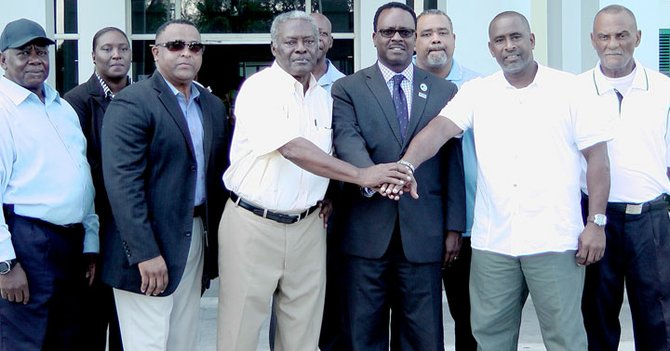 The BBA will remain the authority for the sport throughout the Commonwealth of the Bahamas and the BBF will join forces in the selection of the national teams to compete at world level tournaments that are ratified by the Bahamas Olympic Committee.

“This brings together a confederation of all of the baseball entities in the Bahamas under one working body, under one unit that will see to the future development of baseball,” said Dr Johnson. “We know we have had a long drought here, but it ended today with the signing of both organisations.”

The two-page agreement was signed by Jim Wood, president of the BBA, and Craig ‘Salty’ Kemp, his BBF counterpart.

There have been failed attempts to find a resolution in the past but Dr Johnson assured the media that the issue is finally resolved.

“The battle is over,” he charged.

Wood, who remembered when efforts were made to have the dispute resolved before only for the federation to refuse to co-operate, said the association has waited a long time for this day.

“Three to four weeks ago, the Minister called for me and when I came, he asked me ‘what do I see for the future of baseball and what am I going to do about it’,” said Wood, the long-time BBA president. “I told him that I would really like to see baseball played in the schools and then I can sit down on my laurels.

Wood said he and Kemp agreed to work together for the betterment of the sport and they came up with the two-page pack that they signed, ending the long and bitter dispute.

“I’m relieved, to an extent, because there are other people involved in baseball who want to see us go forward,” Wood said. “Hopefully more kids can benefit and when we get ready to send a national team off, more players will come out because they won’t be told that if you go to the national team trials, you won’t be able to play in the other league anymore.”

And while there has been a lot of emphasis on the Freedom Farm in Yamacraw and the Junior Baseball League of Nassau at the St Andrews Field of Dreams, Wood said the BBA has continued with their programme every Saturday morning in Pinewood Gardens.

“We continue playing baseball. We continue developing baseball, but nobody is checking for us,” Wood said. “But with this agreement, come 2015, we will see a whole new development and eventually we can get baseball back to the level that it was before we had this problem.”

It was during the BBA’s election in 1986 that a dispute erupted between Wood and then commissioner Athama Bowe. That subsequently led to a tie during the vote for president. Another election was called to break the tie, but after Bowe declined to show up, Wood was elected.

Since then, there have been many factions who tried to oppose Wood during his tenure. That eventually led to a split in the membership and the BBF was formed with Greg Burrows Sr serving as the first president. He remained in office until 2007.

On October 6, 2007, Kemp was elected as the second president of the federation and last year he was re-elected for his fourth successive term that will end in 2015.

Kemp said during his last intended tenure in office that he wanted to make sure that the federation and the association co-exist.

“The BBA is recognised as the governing body for baseball; however, we will continue to work in isolation,” Kemp stressed. “When I say isolation, the BBF will continue with its programmes and the BBA with its programmes. But when there is a need to select national teams, we will get together to select the coaching staff, who will then select the national team and it will be open to all of the Bahamian players.

“For the first time in a very long time, we will have access to all of the very best players to represent the country. This is a done deal. This is going to work. We have never been to where we are right now. The two leaders of both organisations and all of its executives are in full agreement. We will always have some opposition, but we have to make the best decision for the sport and the young people of our country playing together.”

According to Theodore ‘Teddy’ Sweeting, who has served as the general secretary of the BBF since its inception in 2003: “We met a situation in place where there has been a dispute that has caused a rift in local baseball, but we can not leave it that way. We have to do whatever it is in our power to resolve the issue with an united force.”

Having agreed on the joint collaboration, Kemp said they hope to meet early in January to look at the calendar of event so that they can decide on what course of direction they will take in sending national teams to represent the Bahamas with the view of getting back to international prominence, both at the junior and senior level.

The last time the Bahamas had a true representation of a national team was under the federation at the World Baseball Challenge in Prince George, Canada, in 2011 when the Bahamas all-based collegate national team, managed by Bertram Murray Jr, beat China 6-5.

The other major tournament where the Bahamas had some success in recent time was in 2006 at the World University Games in Havana, Cuba, when the national college team, behind pitcher Neil Forsythe, defeated the Cuban collegiate national team.

The United States went on to win the tournament behind ace left-handed pitcher David Price, who this week suffered a 2-1 loss playing for the Detroit Tigers against the Baltimore Orioles in the American League playoffs.