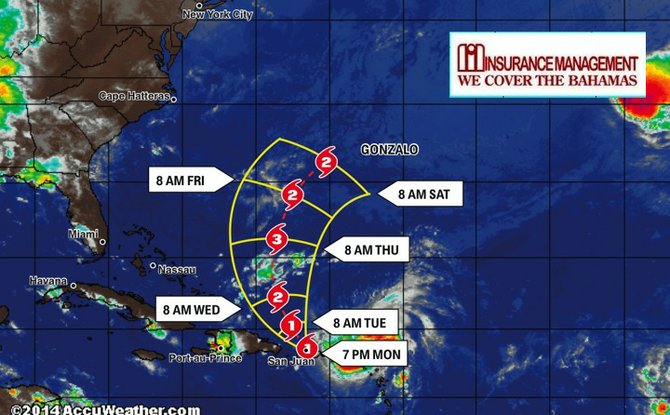 ST. JOHN'S, Antigua (AP) — Hurricane Gonzalo formed Monday in the Caribbean and was on course to move out over open ocean after buffeting Antigua and nearby islands with heavy rain and dangerous wind.

Gonzalo passed near Antigua as a tropical storm, tearing roofs from people's homes and knocking down trees, then gathered enough force near the tiny territories of St. Martin and Anguilla to be reclassified as a hurricane.

"It's intensified at a pretty brisk pace since yesterday and we expect it to strengthen," said Michael Brennan, a senior hurricane specialist tracking the system from the U.S. National Hurricane Center in Miami.

The centre of the strengthening hurricane was on track to pass near or just east of the U.S. and British Virgin Islands. It was not expected to reach the U.S. mainland but forecasters said it could develop into a major hurricane over open ocean and pose a threat to Bermuda later in the week.

"It's certainly something that people in Bermuda will want to pay attention to," Brennan said.

Airports, government offices and school were shuttered in the British Virgin Islands as strengthening Gonzalo steamed toward the tiny territory of roughly 30,000 residents. Premier Orlando Smith called on people to secure their homes and businesses.

But Merlyn Brown, a resident of the British territory's 8-square -mile (20-square-kilometer) island of Virgin Gorda, said she had lived through many storms and hurricanes through the years and wasn't doing much to prepare for Gonzalo other than latching her windows and hoping for the best.

"I've been through a lot of these things so I just take them as then come. I don't get too worked up about the storms," said Brown, who works at a local gas station where more concerned residents were stocking up on fuel.

In the three-island territory of the U.S. Virgin Islands, the international airport on St. Thomas shuttered at 7 p.m. after airlines cancelled flights. All seaports were closed. With rain-heavy Gonzalo bearing down, all burials were postponed until further notice.

For several hours on Monday, heavy rain and strong winds lashed Antigua, which bore the brunt of the storm as it cut through the northern Leeward Islands. Downed trees already blocked many island roads and many people lost power or reported that the storm damaged, or in some cases destroyed, the roofs their homes.