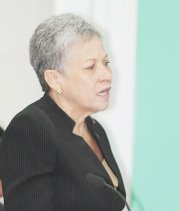 TRANSPORT and Aviation Minister Glenys Hanna Martin says officials are working to prevent a repeat of the tense demonstration that took place between taxi drivers and tour company workers on Bay Street on Monday.

Mrs Hanna Martin told The Tribune: “Certain franchises are able to engage in certain kinds of transport. Tour companies can only take what is pre-arranged 24 hours in advance. Taxis can do simple transfers and tours. They could solicit business from people who walk off the vessel, unlike tour companies whose businesses are by prearrangement.

“The union was objecting to what was being carried out by the tour company because by taking business on the ground, they were not acting in accordance with the franchise holding. The (road traffic) controller has advised me that he is satisfied that there was indeed a break in the policy of the law as it relates to the franchises and he has sought to remediate the situation to ensure it does not occur again.”

“We tried to hear from all sides (during yesterday’s meeting) to get an analysis of what the circumstances were which led to the demonstration that ultimately became an inflamed situation with the staff of the tour operator,” she said. “It appears there was a systemic breakdown of procedures. Simply put, a tour operator is not allowed to take walk-off vessel business. Such operations are not the norm and we will not allow activities not permitted by law to continue.”

Mrs Hanna Martin said better communication among stakeholders will help prevent such controversies from arising in the future.

“People who worked for Bahamas Experience were seen giving out brochures trying to entice tourists to go on their tour,” he said. “A little under two weeks ago the (taxi cab) drivers noticed it, brought it to the attention of officials and went back and forth with those officials about the issue. It was brought to the attention of the road traffic, tourism and even the (Royal Bahamas) Defence Force. Nothing substantial happened, hence Monday’s protest.”

“Every single taxi got at least a fare and came back and some even doubled up yesterday,” he said. “That’s the first time in two weeks the taxis were exhausted and that’s because the (tour operation) was not selling tours yesterday. Before that, drivers were there until two, three, four o’clock and did not get a fare.”

While voicing his disapproval over the nature of Monday’s protests, Mr Watkins said his union has been given assurances by Bahamas Experience owner Michael Symonette that the practices, which caused such tension will cease.

He expressed confidence that tour operator employees and taxi cab drivers will work in harmony again.

“We’ve always gotten along,” he said. “We also know it’s not their fault if the ship only sells a certain number. But we also know that after the ship sells, you can’t be there trying to get more on the ground. You simply can’t do that.”

"physical arguments" = they beat each other up. Why is everything masked in the Bahamas? There is no theft, corruption, criminal activity, just well dressed people talking in grandiose fashion and dancing around the pile of shit.

This been going on from 1957 ..... een nuttin change. Different masters same results

Nothing like getting off your cruise ship and seeing a bunch of people arguing, cursing, and fighting to make you want to come back. You can't make this stuff up. Keep up that foolishness and they won't have to worry about having people to pick up.

Can't even manage our own personal behavior in public, how the hell can we run our own country? Cabbies only mimicking the behavior in the house, as seen on Tv.

A few backhanders at work - nothing unusual!