Sandals Team On Beach Clean Up 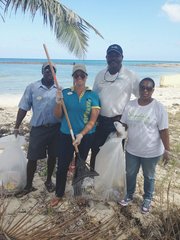 AFTER having to forego a cleanup for Coastal Cleanup Day 2014, a team at Sandals Royal Bahamian chose the day after National Heroes Day to make New Providence’s beaches clean once again.

The group initially visited Goodman’s Bay Beach, which endures heavy traffic and littering during public holidays, only to find a group of students had already removed a large amount of trash from the coastline and park.

“We met students from CR Walker High School on Goodmans Bay, and the beach was clean, which means the awareness and importance of a coastal cleanup is getting around,” said Mr Johnson.

“We wanted to find a beach to clean so we went over to Delaporte’s park.”

Mr Johnson and his team of Sandals employees conduct several cleanups at beaches along West Bay Street each year, and sometimes make dive and snorkel trips to reefs to remove any dangerous litter.

If so many Bahamian beach goers weren't disgusting trash pigs, this might not be needed.