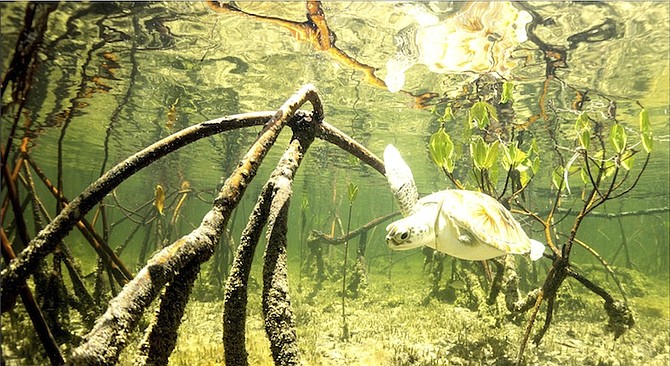 INTERNATIONAL conservation experts are urging the government to fulfil its promise and protect Bimini’s unique ecological heritage and the local industries that have depended upon it for generations.

The experts, hosted on a tour of Bimini by environmental advocacy group Save The Bays (STB), this week called for the official establishment of the North Bimini Marine Reserve. Among other important natural resources, the reserve would protect mangrove forests that serve as a nursery for the abundant sea life that has attracted visitors to the island over the years.

“From an ecological perspective, it’s incredibly important to maintain these mangroves in order to maintain the whole marine ecosystem,” said Rachael Silverstein, the Waterkeeper for Biscayne Bay, Florida.

“This is one of the only mangrove locations in this area and all of the important species that come from the Gulf Stream that people like to fish have habitats here and live in the nurseries here,” she said. “If we destroy that we also destroy our fishing industry and our diving industry and the repercussions can be felt across the Caribbean, across the Bahamas and certainly in Miami – we won’t be able to come here anymore to fish, to dive or snorkel.”

The global Waterkeeper Alliance is a leading non-governmental organisation that co-ordinates more than 200 stewards of the marine environment, or Waterkeepers, who are assigned to rivers, bays, lakes and coastal areas.

Sharon Khan, international director of the Waterkeeper Alliance, said the North Bimini reserve is one of several key protected areas for which the organisation is advocating around the world.

“I believe there is nothing more important than establishing marine reserves in ecosystems throughout this world that sustain our global life,” she said.

Alex Matthiessen, former Hudson Bay Waterkeeper and now CEO of the Blue Marble Project, said: “The (Bahamas) government has already established that they want to create this reserve, but they need to formalise it. They need to make it a legal reserve. The wetlands at the north end of the lagoon are incredibly important and are therefore vital to the local businesses and industries here.”

International conservationists have added strength to the concerned Biminites and other Bahamians who want to see the island’s ecological heritage preserved.

Prime Minister Perry Christie has yet to respond to these entreaties, including a letter from Bimini’s local council requesting that the reserve become reality as soon as possible.

The council asked that the Christie administration commit to the protected area swiftly, in an effort to ensure that developers do not construct a golf course on the island and to prevent further development on its northern tip.

The letter said: “It has become commonplace that major developments occur on our island without notice to its residents or to this elected council. We, therefore, respectfully ask that you respond to these requests as quickly as possible.”

The golf course was among the plans for Resorts World Bimini’s resort and casino development, which environmentalists claim has already caused extensive damage to the island’s renowned reef system, including many of the top dive sites.

Local advocacy group the Bimini Blue Coalition has issued a petition calling on the government to establish the reserve as repeatedly promised.

It has more than 600 signatures to date.

Despite Resorts World’s insistence that the golf course is now off the table, STB director Romi Ferreira said the pattern of frequently changing plans has left many sceptical and in need of official assurance.

As for the claim by Minister of Agriculture and Marine Resources V Alfred Gray that the government is only waiting for conservationists to decide on the boundaries of the reserve, Ferreira pointed out that its proposed parameters have long been established.

In 2012, the Bimini Marine Protected Area Campaign submitted detailed images and descriptions of the proposed boundaries to government, including precise map co-ordinates.

PM Christie and his band of merry men need to hang their head in shame -- why is it that international organizations recognize the importance of preserving Bimini's environment and the government can only see their kickback every time a proposal for a project comes knocking at their door.