Nottage: Don’t be a vigilante 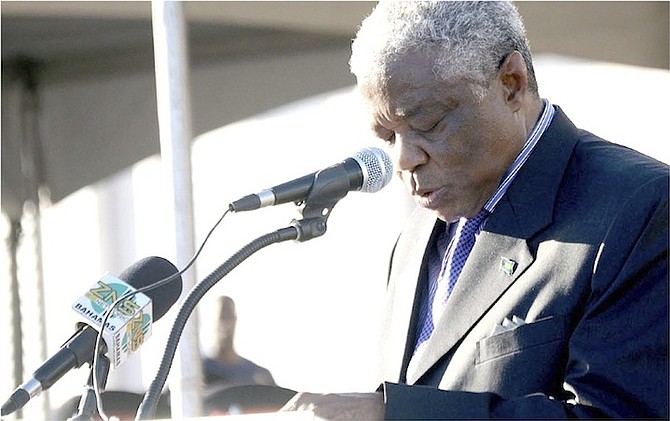 NATIONAL Security Minister Dr Bernard Nottage yesterday said there was “no room for vigilantism” as the government announced the formulation of new crime-fighting strategies.

He said the National Security Council of the Bahamas, chaired by Prime Minister Perry Christie, yesterday agreed to new initiatives aimed at curbing the recent spike in certain types of criminal activity in New Providence.

However, officials remained tightlipped over the details of these plans.

“It would,” he said, “be foolhardy in the extreme to disclose details of these new measures as to do so would be tipping the hand of law enforcement to the very

persons we are determined to catch and put behind bars.

“We are confident, however, that these new measures will achieve satisfying results within a very short period of time and that the perpetrators of violent crime will be brought to justice and made to feel the full weight of the law.”

Dr Nottage said the public can rest assured knowing the government has no greater priority than intensifying the fight on crime.

The new strategies follow the home invasion and murder of Blair resident Andre Cartwright early Tuesday morning. Cartwright was at his Blair Estates home with his mother and father, when three men kicked in the front door of the house.

The assailants reportedly claimed they were police officers.

The incident has renewed calls for relaxed gun laws, to allow more people to own firearms in a bid to protect themselves.

Speaking on the sidelines of a police recruit graduation, Dr Nottage said: “There is no room for vigilantism in our country period. I think that all that will result in is traumatic experiences for a large number of people, including very innocent people.

“It’s our job to keep the country safe, we are devising new strategies to deal with that and we are satisfied that this is a matter that we can bring under control relatively quickly.”

Dr Nottage explained that the country was experiencing a routine “spurt” in criminal activity, a time when persons are justifiably alarmed and fearful. He expressed confidence in the success of new initiatives, and the ability of officials to get crime under control “relatively quickly”.

“It was a very productive meeting, and we expect over the course of this that our strategy will bear positive results,” he said.

Before the deadly home invasion, the Blair neighbourhood watch reportedly sent out a memo last week encouraging residents to be on the look out for the “fake cops”.

Yesterday, Dr Nottage warned persons to always question any person that approaches their home purporting to be a police officer.

“We do have to question it,” he said, “I advise persons whose homes are approached by people who claim to be police officers not to open their doors. They should call their nearest police station. We have hundreds of vehicles on the road and they should be able to get to any point on New Providence.

Dr Nottage added: “My advice is  turn your lights off, get on the phone, call the police control room, and we will provide assistance.”

Pffft... Turn your lights off and call the police! Criminals are breaking down your doors when the lights are already off!

It could work, who knows? The robbers who approached your house expecting someone to be home for them to rob just might be fooled.

they want to steal no rob - however they rob, if they need, and apparently kill for a few bucks of thiefery - so they don't care whether you are there or not. These guys come in da house anyway to take your gold to bring to cashforgold and then to bring 50% the cash to number boyz, which in turn share their profit with Obi wan Kanobi & PGC, and the other 50% go to customs and police, so they can import stolen cares and Uzis from the U.S. without getting caught. If they get caught, they also have to pay off the AG and the Judges from the profit of the importing business, so they get bail or are not prosecuted for a gazillion years, to continue their game, and since the conduct a local business they should get a business license for that plus register for VAT, as am sure these guys make mo' than 100k a year. In their spare time they produce boys and girls that they leave behind with their mothers, to ensure that the future of this business still gets enough uneducated and dysfunctional kids to fill its ranks. Last but not least if they get shot by a rival gang, Mommy speaks to the press and TV and says "He was such a good boy". Only in the Bahamas, only in the Bahamas.

Wow...This man looks like he belongs in a coffin. Bahamian politicians need to recognize when it is their time to retire and leave the public service with at least a little dignity. You cannot offer much when you gat all kinda fossils falling of ya face. This man has limited knowledge in technology and topical trends. He can only offer outdated ideas that maybe worked 20 years ago.

Excuse me Dr. Nottage, wtf please is a 'routine "spurt" in criminal activity'? Talking smart ain't solve the problem. There must be absolutely nothing "routine" when it comes to increased criminal activity. Screw the statistics - people don't feel safe in this country.

I wholeheartedly agree. Too many of them are gripping elected office for dear life.

I would support a elderly politician of sound mind who showed clear evidence of strategies that work. Age isn't necessarily a reason to put someone out to pasture. An intelligent person with years of experience could be invaluable. And no, none of them fit that category.

No matter how experience an elderly politician may be or how good his strategies are, he should only hold advisory positions. Such a person should never be in key leadership positions. Its just the circle of life-After you have reached your prime, you simply retire and make space for others. Besides anyone who wants to hold on to power that long is only doing it out of power greed. The picture this paints is that the Bahamas does not have any young minds that can lead effectively? If that's the case we better pack up we jolly bundle and leave this place.

I agree with Dr. Nottage, there should be absolutely no room for vigilantes in this country. Enforcing the law, catching thieves, rapists and murderers and put them away, is the government's and the judiciary's job. Only problem is, they don't do their job. In all the places on the planet, if a government can not ensure its people to be and feel safe and if the people lose trust into the judicial system, people will try to protect themselves.

On the "fake cops": I suggest that for a while all police officers must wear uniform. I would understand a person that runs from anybody claiming to be a police officer but does not look like one.

Consider that we do have some criminals that have been given a uniform by the Government! Also, the ideas from 20 years ago did not work, hence the crime levels we have today. This has been developing for the past 40 years, spurred on by our squandered opportunity for self determination, our complete lack in assuming the responsibility for self determination, and the new found ability to "jump" into a personal position in the ruling oligarchy for self enrichment. We blew it, short and simple.

He said the National Security Council of the Bahamas, chaired by Prime Minister Perry Christie, yesterday agreed to new initiatives aimed at curbing the recent spike in certain types of criminal activity in New Providence.

Does anyone else see what is wrong with the above statement?

In 2012 they were READY from day one, now almost two years later they are "devising new initatives."

Come now Minister Nottage do you bunch of jokers take all Bahamians to be as dumb as you are?

Day one, Day one. Get it fixed or your whole crew should resign in disgrace.

EVERY FEW MONTHS THEY HAVE " NEW STRATEGIES" THAT WILL WORK WOW

Why is the national security council chaired by the prime minister? When he has two able bodied security chiefs? Why are we constantly paying people to keep chairs hot?

This from the asshole that carries a pistol?!? First thing this moron did when he finally got into government so he can sleep in parliment was to arm himself.

It the damn politicians would give the police the appropriate the tools and training and power, we would not have to resort to "vigilantism" to protect out homes, families, property, selves...get your a** of your chairs and get to work you worthless pieces of human beings...and let some new blood in...your days have already passed!! Get outa here!

In The Bahamas, inner city gangsters appear to be sacred cows. The police do not patrol their neighbourhoods in New Providence. They allow these bad boys to roam the streets all night long and gamble, use drugs and shoot off pistols for kicks. However, New Providence is too small to allow this segment of the population to remain unpoliced. The nefarious daily and nightly behavior which transpires in these ghettos is spilling into the wider community in the form of robberies and unprovoked murders. Pindling started the trend of designating gangsters as sacred cows, because they grew up in poverty and were "oppressed" by the white upper class. Even now, with crime at an all time high, politicians don't want to intrude on the daily deviance of the grass roots. They shake in their boots at the thought of "oppressing" persons that symbolize the black slave revolution from the white Bahamian aristocracy. Further, many Bahamian police grew up in these neighbourhoods and would rather show boat on Bay Street than patrol and agitate the backyard of their past. In order for us to survive as a nation, Bahamian police must infiltrate these neighbourhoods and restore them to civility and order, by arresting all evidence of disorderly conduct therein. 24 hour patrols need to be instituted in the hood, which target homes resided by drug dealers and thugs. It is only through extreme surveillance of "bad" neighbourhoods in New Providence that "good" neighbourhoods will be restored to peace.

Africa asks: 'If Burkina can do it, why can't we?'

News that Burkina Faso's long-serving leader Blaise Compaore had been pushed out of power prompted an explosion of comment from across Africa Friday, with many citizens asking, "If they can do it, why can't we?"

We already did. We had our own "25years is enough of your foolishness revolution" But we allowed ourselves to be fooled and we let them back...

Somehow I missed that "revolution" and obviously it failed because the same two tribes of pirates are still at large and worse than ever!

Now what ya gonna do?