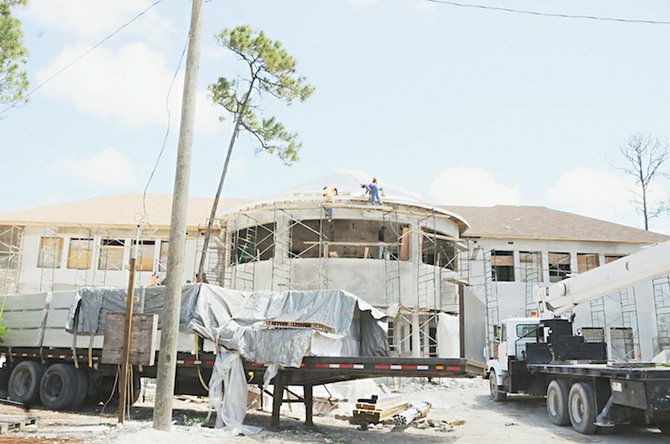 GODFREY Eneas, president of the Bahamas Agriculture and Marine Science Institute (BAMSI), and his senior executive team sat down with Bahamas Information Services at BAMSI’s new offices in the Island Traders Building on Monday to provide an update on the progress and plans of the institute.

Mr Eneas’ update came a day after FNM Leader Dr Hubert Minnis suggested the school would not open this month because of ongoing construction at the site. Dr Minnis also called on Prime Minister Perry Christie to reveal the “master plan” for the research institute, inclusive of proposed marketing initiatives, financial aid for farmers and transportation of goods to various islands.

Mr Eneas confirmed that consistent with the public pronouncements of the prime minister at the ground breaking ceremony for BAMSI last February, the institute is on schedule to receive its first class of 50 students this fall, on September 29.

On the issue of a master plan to strategically guide the growth and development of BAMSI, consultant Dr Omer Thomas pointed out that there are a number of plans, inclusive of a master plan.

“We have a farm plan and we know we are approaching this project sequentially. We could not have established 15 – nearly 20-odd acres of bananas, going up to 50 (acres) and 12 acres of papayas without a plan.”

The area includes five acres of Persian limes and four acres of coconuts. He went on to say that the farm plan includes a planting schedule, a developmental schedule, which BAMSI is following along with an irrigation system. “The irrigation system is being laid out – it must have a plan. So it is not a haphazard process that is going on,” said Dr Thomas.

The master plan for phase one of the campus was developed by the Diamond Consulting Group, headed by local architect Sean Farrington.

Providing further details on the marine science division of the institute was Dr Vallierre Deleveaux. He said that the aquaponics project should be operational by the end of the month. This project involves the harvesting of fresh water fish in a balanced, controlled and enclosed ecosystem where the marine life and plant life will co-exist and feed off each other. Dr Deleveaux added that the institute will introduce “offshore cultures” into the marine component of the project, specifically the introduction of “additional aqua culture operations and shrimp culture operations” in association with partners from universities abroad in addition to entrepreneurs, both local and international.

Additionally, the research component in marine science is scheduled to commence this month with the first international course involving foreign students to commence in January 2015. The scope of the research will include the in-depth examination of the behaviour of marine species such as bone fish, the Bahamian grouper and conch.

“There is a full-fledged research programme that will be underway at BAMSI,” said Dr Deleveaux.

BAMSI will be an autonomous body located in North Andros. Accredited associate degrees and certificates will be offered by The College of the Bahamas through its partnership with BAMSI.

I don't know Mr Eneas, I can only assume that the PM found the most qualified person he could to take on this task. What I do know is the plan is a hill of beans if the stakeholders have not seen it. If they have not had a chance to review it and assess whether their 20 million is being spent wisely. You have 300,000 stakeholders whose money you have appropriated who are completely unaware of anything you are doing. That is not a plan, it's a closely held secret.

Everything to do with this project should be made public. I want to see the money trail. This is The Bahamian people's money, which by the way is in short supply. 5 acres of limes, we have been told the TREE"S cost a million dollars so that would mean just the tree's cost $200,000 an acre, what other cost's where involved per acre and is that in line with what it "really" should cost? Let me put it straight to you, we as the Bahamian people do not trust those on charge and are sick of getting ripped off. Are we getting ripped off at BAMSI, or is this just another political boondoggle per usual? After being hoodwinked so many times can you blame Bahamians to wonder and be pessimistic?

"Proven Leadership" & "A Matter Of Trust" has not worked in 41 years......I seriously doubt BAMSI will prove any different!