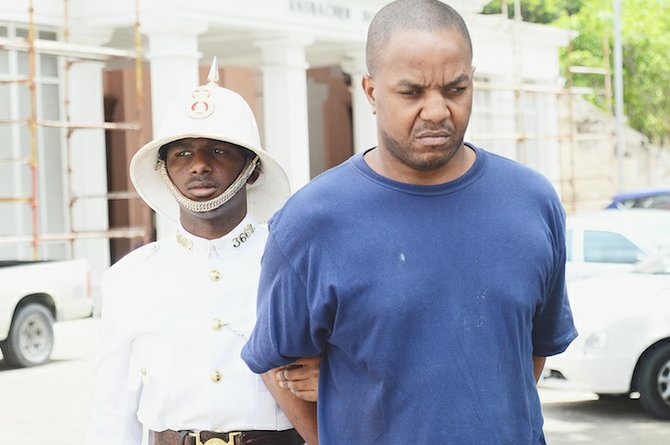 TAXI driver John Adderley walked away from the Supreme Court yesterday with a 32-year prison sentence for the murder of his former girlfriend.

He faced between 30 years and life imprisonment when he appeared before Justice Bernard Turner to learn his fate for the fatal shooting of Denise Adderley on January 9, 2011.

Mr Adderley’s lawyer, Murrio Ducille, had argued in the trial that his client be found guilty of manslaughter rather than murder on the grounds of diminished responsibility from depression.

But a jury rejected Adderley’s claim that he was not himself that night when they returned a unanimous guilty verdict in May.

Last week, Mr Ducille and prosecutor Sandradee Gardiner made submissions to the court regarding sentencing.

The defence lawyer said his client accepted what happened that night, but denied that his actions were premeditated because they were out of character.

The lawyer told Justice Turner that he had the discretion in dealing with each case according to its own merit.

He also said that the defendant’s daughter wished for her father to be released and understood that her father should go back to prison for life if he re-offended upon release.

The lawyer also noted that the mother of the victim had no “malice or venom” for Mr Adderley and was prepared to accept whatever punishment the court imposed.

Gardiner said while the characteristics of the accused were something to take into consideration, justice must also be considered to determine “what is right for society, but more importantly what is right for Denise Adderley”.

Yesterday, Justice Turner explained that the 32-year sentence, which falls towards the lower end of the scale set by the Court of Appeal in cases where the death penalty was not sought, took into account the mitigating and aggravating factors in this case.

The court noted the convict led a responsible life, had no prior brushes with the law, was well-liked by family and his peers and showed remorse for the loss of life.

The court then looked at the circumstances of the killing where Ms Adderley, a pre-school teacher at the Uriah McPhee Primary School, was shot and killed by the accused as she sat in her car at the Texaco Service Station on Wulff and Kemp Roads.

Justice Turner said the 32-year sentence, which runs from the date of conviction, did not include Adderley’s time on remand since his arraignment days after the killing.

The 40-year-old is slated to serve 28 years and eight months at Her Majesty’s Prison barring an appeal.

The Tribune understands an appeal has already been filed.

GOOD. To hell with his daughter and whoever else wants him to come out. Life sentence upon re-offending?? This man committed MURDER. He murdered YOUR MOTHER. What in the world is wrong with these Bahamians?!

He seemed like a good guy. Guess he just lost it. I know him from somewhere. Working security or something. Feel bad for his daughter. Sad! Hope he finds peace in his life and all the families involved find some also.