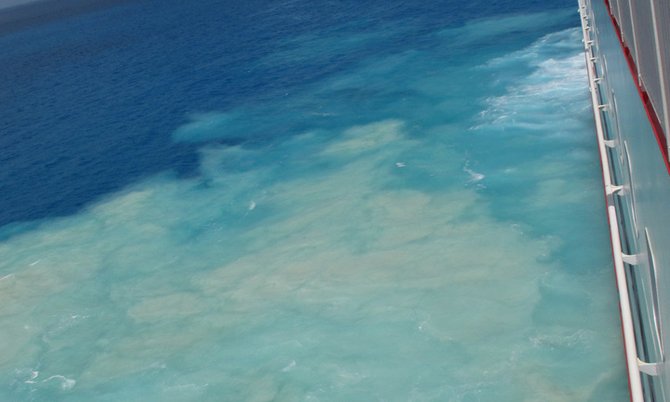 THE environmentalist group Bimini Blue Coalition has released photographs taken a week ago by a ferry passenger which it claims shows a plume of mud and silt thrown up by the Resorts World Bimini (RWB) SuperFast.

The Coalition has been fighting RWB’s construction of a cruise ship terminal, 1,000-foot pier and man-made island and dredging activities associated with it. Its concerns include turbidity issues related to the SuperFast ferry operation, which brings passengers from Port Miami on Fridays, Saturdays and Sundays.

“What were once the clearest waters in the Bahamas, world famous for their beauty and bounty, are now becoming a disgusting plume of mud and silt,” the Coalition said in a statement. “RWB is also now stating that they are going to increase the schedule for the SuperFast, further polluting Bimini’s waters and killing our reefs every day of the week.

“This is terrible for all of Bimini’s businesses and residents, and is making the island far less appealing to tourists. What will be left for Bimini’s residents and tourism industry, including RWB, once they’ve further destroyed the beauty of what draws people here in the first place? There is no plan in their Environmental Management Plan to address turbidity issues during operation, despite it being one of the most serious threats of this whole project.”

RWB announced on Thursday that it has completed construction of the pier and that the ferry will start using it from September 18. In addition, Genting Group, which owns the resort and the ferry, announced that it will begin ferry service from Fort Lauderdale to Bimini on October 14. The ship will leave Port Everglades on Tuesdays, Wednesdays and Thursdays, in addition to its departures from Port Miami.

Genting has been tendering passengers from the ferry to the bay side of the island, a process that takes about an hour each way. Guests then take a shuttle to the resort or to Alice Town for sightseeing. Time on the island for a day trip totals only about two and a half hours.

However, with the new port, which was built on the ocean side, guests will disembark directly from the ferry onto land and be able to spend five to six hours on the island, Genting says.

The ferry — a 13-year-old cruise ship renamed the Bimini SuperFast — began sailing from Miami to Bimini just over a year ago after Genting bought the former Bimini Bay Resort, built a casino and started work on a 305-room marina hotel, to be completed this autumn.

Although some passengers stay on the island overnight, a large majority are daytrippers on the ferry, which leaves Miami at 9am and returns around 7pm. The ferry has two casinos, a sports book and VIP rooms for high-rollers, and many of the daytrippers play at Genting’s casino on the island.

Although construction of the dock was approved by the Bahamas government, it ran into opposition from people who complained that it would damage coral and the rest of the underwater environment.

The new dock includes a temporary Customs and Immigration facility; permanent facilities are the next phase of the project. Genting also will build new beach amenities, including a restaurant, beach club and craft market.

Resorts World Bimini will do everything they can to keep people on their property, and not in Alice Town, Bailey Town, or South Bimini. Their Environmental Consultant admitted off the record that the main reason for the position of that misplaced pier was to funnel people directly into their property, rather than the other areas of Bimini.

I've taken the family over to Bimini 2 or 3 times every summer for the past 6 years. My kids loved snorkeling thru the tunnel cave and seeing the incredible diversity of fish life at the Three Sisters Islands that are 1/2 mile north of the new pier. In the spring the pier construction was halted due to court injunction from challengers. Although there had been no work for months, in June the Three Sisters Islands were totally silted out and the water, instead of Bahamian clear, was a soupy mess with 10-foot visibility. My kids were so upset that now they don't want to go to Bimini anymore. On each trip, we had gladly spent about $2,000 for 4-days in our Bimini paradise (hotel, fuel, food, beer, local crafts, etc). But no more. Thanks to Resorts World Bimini...