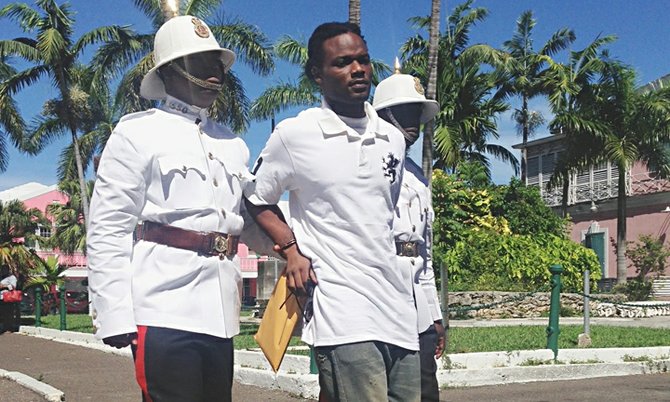 Oscar Ingraham pictured outside of court.

A JUDGE has been asked by the Crown to hand a life sentence to a double rape convict who is “a serial rapist” and a “danger to society”.

However, Oscar Ingraham told Justice Carolita Bethell he still maintains the case against him was nothing more than conspiracy concerning the separate home invasions, gun-point robbery and sexual assaults of two women in 2012.

Ingraham said he would like the public to know “the Crown is indicating my DNA was found on the crime scenes” and that it was “not true.”

When asked by the judge if he had anything to say in relation to sentencing, Ingraham said there were “a lot of females out there, family, friends and associates that know in their hearts that not one day Oscar Ingraham had ever been inappropriate with them.”

Prosecutor Raquel Whymms was more detailed in her submissions to the court regarding sentencing. She said that two juries in two separate cases had convicted Ingraham of burglary, armed robbery and rape. She added that the punishment for burglary carried up to 20 years in jail and the remaining charges up to life imprisonment.

She said the complainant in the first matter had celebrated her birthday the day Ingraham had decided to invade her home, rob her at gun point and rape her. The prosecutor added the complainant said she will never forget that day.

Ms Whymms said the circumstances in the second case were similar in that the 65-year-old woman also no longer feels at peace in her own home.

The prosecutor said that Ingraham refused to accept responsibility for his actions even in the face of DNA evidence found in the complainants when they were medically examined after the respective incidents.

Ms Whymms added that the convict allowed the two women to relive the trauma all over again in the courtroom. “What he did, it is a robbery of the very soul of the person,” the prosecutor submitted.

The prosecutor further added that a psychiatrist deemed Ingraham “a serial rapist” and a “danger to society.”

“Dr Bodha has diagnosed Mr Ingraham to be a sociopath and he said that sociopaths can not be cured,” the judge was told.

She submitted that the punishment of life imprisonment would serve as a deterrent to society and others like the convict that such actions would not be tolerated.

After 30 minutes of submissions from both sides, the judge adjourned the proceedings to September 19.

Ingraham, according to evidence in the trial concerning the first incident, broke into the home of two foreigners, and robbed them of cash, cell phones, travel documents and government-issued identification and work permits, valued at $3,325.

In the trial that concluded in May concerning the second incident, evidence revealed that he broke into a woman’s western New Providence home and robbed her of $165 cash and a $200 Nokia cell phone before sexually assaulting her with a gun to her head, despite her pleas for mercy.

The second incident occurred during an island-wide power outage.