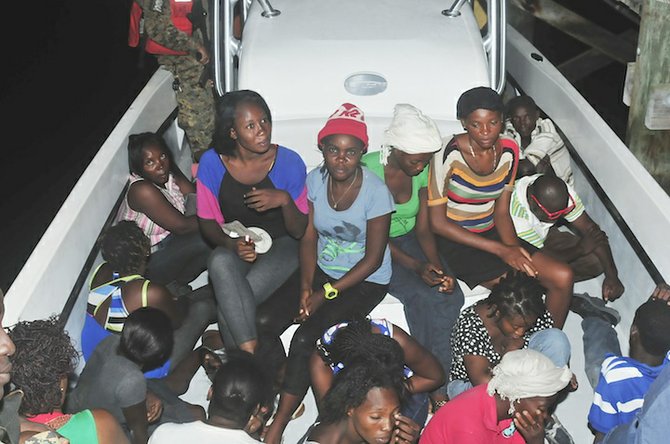 Monday’s apprehension, a joint effort with local police officers, brought the number of arrested Haitian migrants to 631 since the first week of June, according to The Tribune’s records.

According to reports, a blue Haitian sailing sloop was sighted at approximately 10 nautical miles off Darby Island in the Exumas by police officers who subsequently brought it alongside Farmer’s Cay.

The migrants were subsequently caught by Defence Force Fast Patrol Crafts commanded by Chief Petty Officer Ross Seymour. A search of the vessel resulted in the apprehension of undocumented Haitian nationals: 79 men, 14 women, and one child.

The migrants were taken into custody and were taken to the RBDF’s Coral Harbour Base where they were handed over to Immigration authorities for further processing.

On the weekend before August 25, defence force

officials apprehended 105 Haitians – 76 males and 29 females – from a Haitian sloop several miles off the southern end of Duncan Town.

Twelve hours before that, on August 19, officials on routine patrol encountered and detained 124 Haitians in Flamingo Cay off Ragged Island.

On July 5, 30 Haitians were detained in Abaco after being taken from a sloop that authorities intercepted. A week before, on June 27, officials apprehended 102 Haitians from Hawksbill Rock in Exuma.

And on June 3, 76 Haitian migrants were arrested from Belle Island in the Exuma chain.

He said addressing the issue was one of the reasons he had come to the Bahamas to sign bilateral agreements with the government with the hope of creating the kind of opportunities that would improve Haiti’s economy and give Haitians a reason to stay at home.

If they caught over 300 in less than three weeks with the new boats, imagine how many hundreds were getting by BEFORE they got the new boats. It just shows the enormity of the situation. Pathetic!

These Haitians should be interrogated to find who their Nassau contacts are and who sponsored them!

Haitian Bahamians found aiding illegals should have any and all status immediately revoked and they too should be deported. Indigenous Bahamians found guilty should be heavily fined AND jailed for 5 years for each illegal they are associated with aiding into the country illegally.

Successive governments has been playing this stupid game with Haitians for 41 years to the detriment of citizens and best interest of the country.

PLP must either get serious or get the hell out of the way and let others do what needs to be done!

Branville McCartney was ready and able to deal with this issue on day one - if elected - BUT the people of the Bahamas did not see fit to give his party more than 8% of the total vote and not even ONE seat in Parliament.

Bahamians have chosen suicide, and they have the right to choose it. That's called democracy. The end is near.

"were taken to the RBDF’s Coral Harbour Base where they were handed over to Immigration authorities for further processing. "

That's what the article says.

In other words, they will be processed and given National Insurance cards, Bahamian passports, assigned to their pre-selected shack in one of the shanty towns, and given maps to show them how to get to their pre-assigned job the following morning.

It's all set up in advance.

they come stylin and posin. bey muddos. this crew in particular look like they from the part of town with plenty understanding. please ask them wtf they thinkin?