Bulldozers Move In On Shanty Town 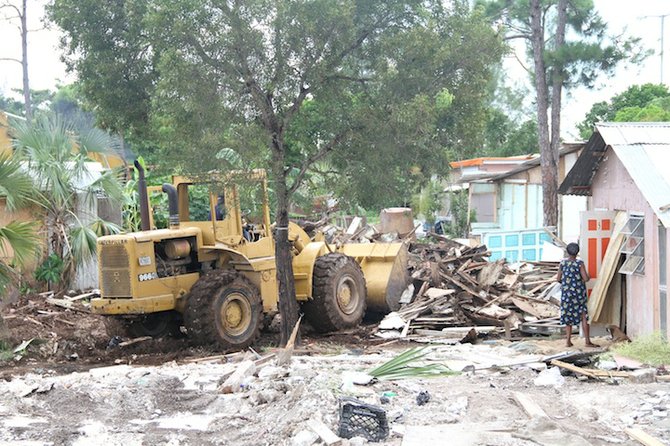 RESIDENTS of a shanty town in the Carmichael Road area of New Providence yesterday had their homes bulldozed by contractors hired by the Ministry of Environmental Health following eviction notices given residents over a month ago.

The occupants of “The Yard” on Faith Avenue north were given eviction notices on August 1 and had 14 days to “vacate the property”. The Tribune obtained a copy of the eviction letter given to the shanty town residents.

However, one resident of the area said they had complained to the landowner to give them more time to vacate and relocate. That time ran out yesterday.

When The Tribune arrived at the shanty town, a significant portion of the village had already been cleared, leaving behind only heaps of rubble. The debris was being loaded onto a dump truck to be carried to the city dump.

According to one of the operators, officials from the Department of Environmental Health gave them orders to demolish the village.

However, he said, as some persons were still in the process of relocating, their homes and belongings would be spared only until that process had been completed.

Residents looked on helplessly as the heavy machinery ripped through the wooden structures that they had called home. Some could even be heard above the noise of the tractor’s engine voicing their displeasure with what was happening.

“It’s really unspeakable because it’s not everyone who has somewhere to go, so it’s really harsh,” said a resident, a 15-year-old girl. “I feel sad because it isn’t everyone who could have the money to go rent apartments or find someone to pay their rent. Times are really hard now. So you have to find money to pay first and last deposit, and find money each month to pay for that house. Not everybody is working to say they could find the money to pay that.”

According to a woman resident, on August 1 an unidentified man entered “The Yard” and issued eviction notices to everyone in the village.

The letter was signed by “C Alexander Dorsett”. Housing and Environment Minister Kendred Dorsett and the Department of Environmental Health were copied on the letter.

When The Tribune visited the village last month, a number of the houses were intact, but some had been destroyed. At that time, many of the existing homes were vacant and most of the empty ones had numbers spray painted on the walls.

One resident explained that the houses with numbers on the walls had previously been marked by government inspectors as houses unfit for dwelling, and were to be demolished in any event.

She said that on issuance of the eviction notices, many people left the village, some seeking refuge in the Family Islands and others going back to Haiti. Others opted to disassemble and transport pieces of their wooden houses to live in other areas in New Providence.

Residents with nowhere to go and no resources to relocate either moved in with other neighbours or occupied the houses previously utilised by former residents, she said.

Preparations to demolish “The Yard” began in July, when the government cut and cleared down the high bushes and shrubbery that concealed the shanty town from passing motorists on the Sir Milo Butler Highway.

Mr Dorsett said the area had become a concern for public health officials and would be a focus of “clean-up” and “elimination.” He also said the government was at the time trying to determine whether the land was privately owned or land that belonged to the government.

When The Tribune contacted C A Dorsett and Co, an employee said lawyer Alexander Dorsett had confirmed that the land had been privately owned for the last 50 years.

Mr Dorsett would not say who the unidentified man was who reportedly visited the shanty town or reveal his client’s name.

According to Leonard Miller, Director of Environmental Health Services, Mr Dorsett plans to make an announcement on the status of shanty towns within the next week.

If you notice the action of destroying the shanty town has caused many of the "for rent" signs to disappear. The only question is will these people be able to maintain living costs over the long term. Then many Haitians moved out from the inner city because of crime and violence. As some said on a radio interview their next option is to move back to Haiti. Much of the farm land that many Haitians use 5o live on in Carmichael area is now residences for Bahamians or commercial property.

So we need an increase in crime and violence to get rid of Haitians?

Where did you ever get that idea from?

John...Not so fast...Yes, Haitians are moving into inner city areas and paying rent.

However, they are living like cockroaches by packing multiple families into a single 2 bedroom unit designed for a family of 4.

That maybe fine in Haitian culture but it is not welcomed here!

Hi John, you make a good point. Perhaps we can move more of the Haitians to the family islands where we have lots of crown land for them to live and farms on.

I understand that in one family island the schools are completely filled with Haitians and much of the employed work force is Haitian.

Your point is a non issue. The jobs that most Haitians do are here in New Providence. Most kitchen staff in many restaurants (Lyford Cay included) are now Haitian, so you may not be as distant from the shanty towns as you think.

these people have lived free off of Bahamians for far too long,that is always their cry,no money'nobody loves money more than Haitians,they dont work for free ,knock everyone of those unsightly contraptions down,you want to live here go and pay rent and stop squatting on peoples land,they sure have money to send back Haiti every single week,just go in fidelity Bank.

This idea of Haitians sending money back to Haiti, I believe, is a red herring - designed to fool the public. Yes, they send money back with certain money wiring establishments - BUT (I believe), when the boats come in from Haiti every week they just go down to the boat with their transfer slips and get that same money back from the Captain.

Those boats (I believe) bring in way more money than the amounts that were wired down. The Haitian Government is subsidizing their citizens to live here and breed and take over the Bahamas. It is a new kind of war. They heard about "majority rule" and have taken it to heart.

So don't be fooled by these little wire transfers. The most money is coming FROM Haiti - not going to Haiti.

We are at WAR with Haiti (except only the Haitian know it. Bahamians are unaware).

However, at the same time - I MUST commend the Government on this recent action against these Haitian soldiers squatting on our land. Maybe they are beginning to wake up. I am well pleased so far.

"Some were seeking refuge in the Family Islands and others were going back to Haiti...." Back to Haiti? Yeah. Sure. Who are we fooling here?

Unfortunately many Bahamians grew up living in similar shacks that we now so severely despise (Shanty Towns). One or two bedroom clapboard house, two parents and five children. Add an outside toilet and the task of toting water from the government pump. Crime involved jumping fence to steal ju ju or hog plums and murder was unheard off. When the last candle or lamp was blown out one had no choice but to fall sleep. There was no cable, no internet, no cell phone and tv programming signed off at midnight if you had electricity. Many of the country's leaders or now successful people lived this experience Today most Bahamians have bigger houses, smaller families and more crime. Deadly crime even. Compare that to the shanty towns, that are still virtually crime free.

There are still some shanty towns left John. Pack ya bag and go move in.

With the taxes this government putting on us (Bahamians) soon we will either need a foreign passport or move into one of the shanty towns..why you nad?

With the taxes this government putting on us (Bahamians) soon we will either need a foreign passport or move into one of the shanty towns..why you mad?

Your name describe you perfectly(MadHatter). You are definitely "Mad".in the sense that you are "CRAZY".I believe in conspiracy theories but that one is too far off the deep in for even me.

With the taxes this government putting on us Bahamians all of gonna soon need a foreign passport or move in a shanty town. Why you mad?

When you watch how the cost of living is escalating in this country many more will be in the poorhouses and shanty towns. Lamb chops went from $1.99 per pound to $4.99 in less than a year. Come January 1 it will cost $5.36 after VAT (Vatican TAx) if the price doesn't increase before then. Despite increases in electricity bills, BEC cannot keep the power on and have damaged many homeowners appliances and electronic items. The heavy rains are causing damage to many 'houses' in the inner cities that have leaky roofs and to many in areas like PInewood that are prone to flooding. Some homes had up to 24 inches of water more than once this week. Many persons have stopped buying fruits because of their high prices. There is a housing shortage and many (Bahamians) who earn the median income of $200.00 a week cannot afford an apartment that starts at $600.00 a week exclusive of utilities.