INSIGHT: Anyone for golf? Not us, say Biminites 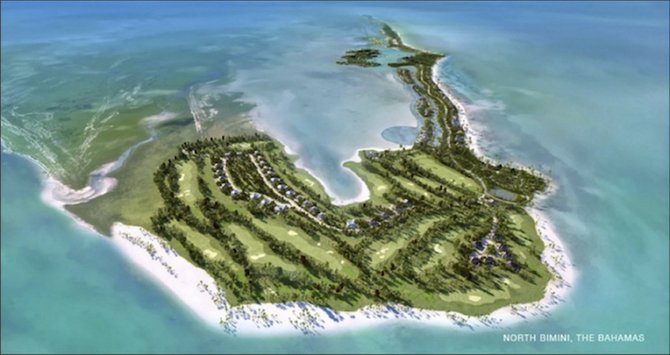 A view of the future?: A computer-generated aerial image on the Investhaus website used to promote Bimini as a paradise destination featuring what appears to be a golf course amid plush greenery and homes near water.

The mood in Bimini is changing to reflect that the island should not accede to the needs of tourism at all costs, Rashad Rolle writes.

Amid conflict in May over the construction of a large pier in North Bimini, former Bimini Chief Councillor Lloyd Edgecombe told The Tribune that the following month’s local government elections on the island would be a referendum on whether Biminites supported recent tourism developments. He seemed sure he would be re-elected.

While the veteran Bimini politician led protests against similar developments on his island a decade ago because they threatened to destroy the environment, he vocally supported Resort World Bimini’s (RWB) recent ventures, even blasting critics as selfish when their opposition threatened to derail the construction of the 1,000-foot pier.

After the votes were tallied, Mr Edgecombe was rejected from office, along with most members of the council who had chosen him to lead.

Current local council member Al Sweeting is careful not to reduce that result to a single reason but summed it up like this: “People make changes when they’re dissatisfied.”

Despite the government’s persistent excitement, development in Bimini remains a divisive issue for residents and any further development in North Bimini is one the island’s new council appears prepared to oppose head on.

Charged with what they believe to be the support of most residents, eight of nine Bimini local council members recently signed and sent a letter to Prime Minister Perry Christie, Local Government Minister V Alfred Gray and Tourism Minister and Bimini MP Obie Wilchcombe in what constitutes their only formal request of the government since assuming office in June.

They requested that the Christie administration commit to ensuring developers do not construct a golf course on the island and that it prevents them from conducting any further development on the northern tip of North Bimini. They also requested that the government move swiftly to establish the long promised North Bimini Marine Reserve to protect Bimini’s environment – a measure that would essentially veto any development plan for the area.

The council’s letter said: “We, the undersigned, members of the district council for Bimini and Cat Cay, formally request the following:

It added: “It has become commonplace that major developments occur on our island without notice to its residents or to this elected council. We therefore respectfully ask that you respond to these requests as quickly as possible.”

Until now, the public face of opposition to development in Bimini for environmental reasons has been Freeport resident and attorney Fred Smith, QC, and the environmental group he represents: The Bimini Blue Coalition (BBC).

Given the relative anonymity of many BBC members, critics like Mr Edgecombe have, with some success, sought to portray them as wealthy and selfish non-Bimini residents unconcerned with quality of life issues facing many Biminites.

But with a new council headed by a new councillor, the face of opposition to possible future development on the island has changed to reflect the constituents of Bimini, giving renewed energy to the environmentalists’ activism.

Asked if RWB has any plans to construct a golf course in North Bimini, the company’s Public Relations Director, Michelle Malcolm, told The Tribune over the weekend that the resort does not.

Likewise, Mr Gray said last Thursday: “(RWB) hasn’t applied for a golf course as much as I know so there’s no point in complaining about something that has not even been applied for.”

However, those concerned are taking these statements with a grain of salt, citing the latest RWB community enhancement master plan dated February 22, 2013, which featured a golf course in North Bimini, and RWB’s pattern of changing its plans as reasons to be sceptical.

Complicating the matter further is that Bahamas Real Estate Rockwell Island and Investhaus, a boutique financial consultancy firm, have as recently as last week prominently featured a computer-generated aerial image of Bimini in posts on their various webpages. The image they use to promote Bimini as a paradise destination features what appears to be a golf course amid plush greenery and homes near water.

Representatives of Bahamas Real Estate Rockwell Island and Investhaus could not be reached for comment on the matter yesterday.

Nonetheless, for environmentalists, these facts breed scepticism, prompting them to call for definitive measures like the establishment of the North Bimini Marine Reserve to ensure that no golf course or other development will be constructed in North Bimini.

Says Save the Bays CEO Lindsey McCoy: “While the only master plan that has been released includes construction of a golf course in the area that Save the Bays seeks to have protected, it has been noted that Resort World Bimini has changed their plans in the past. Furthermore, because any construction or development of any kind in that area would destroy the vital marine habitat therein, we join with Bimini’s local council in seeking to have North Bimini made a marine reserve.”

When approached last week, neither Mr Gray nor Mr Wilchcombe confirmed or denied to The Tribune that they will accede to the council’s requests.

Mr Wilchcombe said: “We are working with the Bimini Resorts World everyday. Obviously they have their thoughts and ideas about where they want to go. We’re gonna protect Bimini. That’s fundamental.

“The environmentalists, they have a role to play and we accept that. That’s a part of a growing democracy and we have not forgotten the issues they raise. But the truth is we are prepared to protect the environment of Bimini. The Chief Councillor of Bimini and the council has already written to me about their concerns and what they don’t want to happen any further but growth you have to understand, this is a small island, how much more can it handle?

“We’re not going to do anything that’s going to harm the island of Bimini so wherever necessary we’re going to put the brakes on, but the truth is we’ve done well so far, we’ve caused some things to happen in Bimini and this development is not hurting anything.”

On the topic of the marine reserve, Mr Gray said: “As far as the reserve is concerned it’s been approved by the government and so it is up to the conservationists to establish the demarcation. But the government has to approve the reserves for the Bimini area. They just have to say, this is it here and mark it out. It won’t have it overnight, but it is on the way.”

Despite Mr Gray’s statements, conservationists have long laid out the boundaries for the proposed marine reserve and filed it with the relevant government agency. The ball is now in the government’s court – it’s up to the Christie administration to make it law. Whether it does so will likely be interpreted as the definitive statement on how serious the government is about protecting the environment of North Bimini.