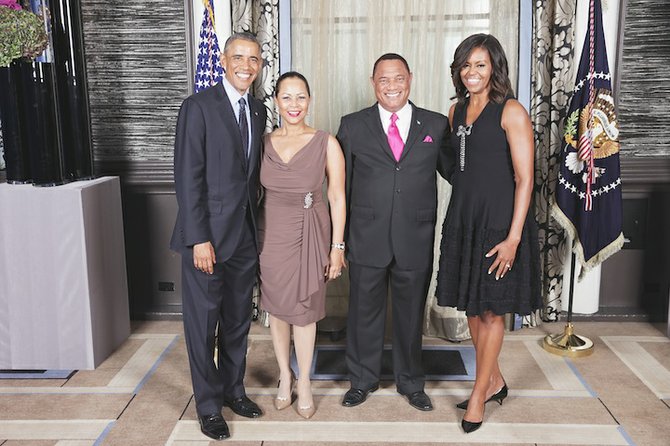 Prime Minister Perry Christie and his wife, Bernadette, are greeted by US President Barack Obama and Michelle Obama during the United Nations General Assembly reception at the Waldorf Astoria Hotel in New York on Tuesday. Photo: Lawrence Jackson/White House

A TREATY designed to better monitor the trade of firearms and ammunition between countries was ratified yesterday morning by the Bahamas government and five other countries in New York.

Foreign Affairs Minister Fred Mitchell told The Tribune that the United Nations Small Arms Trade Treaty will assist in fighting the epidemic of violence and crime in the Bahamas.

The government signed the treaty in June but five more countries were needed to bring it info force, Mr Mitchell said.

“This treaty is the first of its kind to regulate the transfer of weapons across borders. The agreement is one which the Bahamas and other Caricom countries have lobbied and fought to get as an initial step to regulate the flow of weapons from manufacturing states,” he said.

“It became legally binding yesterday and will help in reporting and tracking weapons from countries that manufacture them. We are usually the recipients and on the receiving end of the weapons trade and this will help in getting a better handle on guns and ammunition.

ratified. It was ratified yesterday.

“So there was a formal ceremony to present the instruments of ratification which really is just the signed treaty. Now that it is ratified it means the Bahamas agrees to and is bound by its terms. So the treaty can help curb the spread of deadly weaponry into irresponsible hands and provides a legally binding commitment.”

Officials say 53 countries, including many major arms exporters, have now ratified the measure, aimed at stemming the worldwide trade in illegal weapons, which is estimated to generate between $60 billion and $85 billion annually.

The treaty will require countries that ratify it to set up a system of national regulations to control the transfer of arms and arms components and to regulate arms brokers. It is not designed to control the domestic weapons within any country.

The ratification of this treaty comes a day after National Security Minister Dr Bernard Nottage linked “illicit activities” to the “continual influx of guns” being illegally imported into the country. He said the issue called for “more robust surveillance and reconnaissance measures” by governments in the region.

He said that of the 88 murders that have happened in the country this year, 83 per cent of them were committed with firearms.

“We know that the murders are committed primarily with guns, and so it’s a very important part of the plan to seek to seize as many guns as we can,” he said. “We’ve got a lot of intelligence information from communities about who has guns. So we’re very pleased at the fact that we have that, but the problem is that the guns continue to come in.

“So far this year 253 illegal firearms and 3,500 rounds of ammunition have been confiscated, and we are determined to rid our country of them. The government is determined to maximise our resources in thwarting all efforts to smuggle illegal firearms into our country. This is not a matter that we’re going to be able to overcome in a year or even two years. It’s a steady investment of resources in the fight against crime, and we’re doing that,” he added.

US Chargé d’Affaires Lisa Johnson pledged that the United States would aid the Bahamian government in the fight against the importation of illegal firearms which “poses a serious threat to the security and stability of the western hemisphere.”

According to Ms Johnson, the Association of Caribbean Commissioners of Police cited the Caribbean region as having 1.6 million physical guns in circulation.

Sure...we'll monitor it...and help distribute it to the needy criminals!!

Ok what we are trying to do with the US, Mexico has been trying to get the US to do for 20 years. Not happening. US needs to change the accessibility and proliferation of arms within its borders. For now, US is still the supermarket for guns for all kinda creeps and criminals. A good first step, but nothing to rely on.

By one estimate Obama has done 50 million plus of these types of pictures since he's been in office......just about every Tom, Dick and Harry has one, including Oprah!

The "little emperor" Hubert Alexander Ingraham couldn't qualify for one though!

Obama may recall Christie own too!

Mrs. O. Should haul off and slap some sense into Christie!