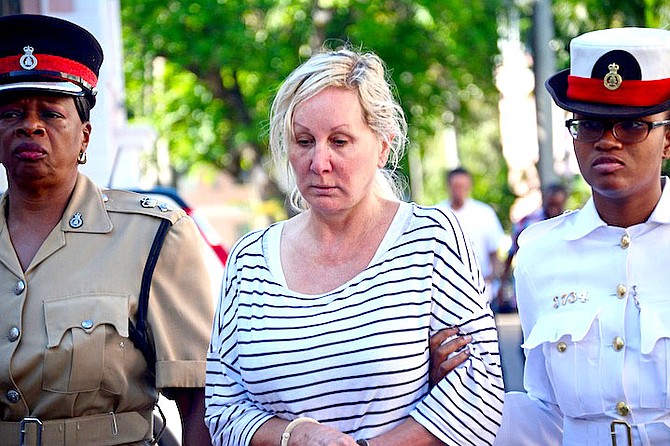 DONNA Vasyli, 54, has been denied bail by a Supreme Court judge ahead of trial in connection with the fatal stabbing of her husband, Australian podiatrist, Phillip Vasyli.

Her appearance before Senior Justice Stephen Isaacs for a bail hearing this morning came three days after she was arraigned on a murder charge in Magistrates Court in connection with the March 24 incident at their Old Fort Bay home.

Mrs Vasyli, also Australian, was denied bail in the lower court as Chief Magistrate Joyann Ferguson-Pratt did not have the jurisdiction to consider bail.

Senior Justice Isaacs noted the unusual speed in which the bail application appeared in Supreme Court. However, he said that there had been no unreasonable delay in the case nine days after the alleged murder and noted that Mrs Vasyli had not sufficiently satisfied the court that she should be granted bail.

Murrio Ducille was told that he could appeal the ruling to the Court of Appeal. Neil Braithwaite responded for the Crown against the application.

take her passport. she will not ever kill another person, that is for sure. and if she takes off nevertheless, we have a problem less to deal with.

Your comments are so horrible, she was the victim of domestic abuse beaten constantly and yet never said a word, for fear of more beatings. There is always two sides of the story.

My goodness now that's is not a nice thing to say, you are obviously a angry person.

would have been a good opportunity for the judiciary to make some money. Put her out on 2 Mio bail and let her go. Don't worry the Australians would have picked her up. Instead, we are wasting our courts precious time with a domestic dispute, that I bet involved drugs, money, sex.

you make a good point

Seems like jail is already taking its toll on her...was she an embittered wife?

Most of the murders committed these days seem to be by people already out on bail, so why shouldn't Mrs. Vasyli also be granted bail? So, for once, the good court sees fit to keep someone charged with murder on remand. Hmm, don't know if to be impressed or laugh.

The Bahamian judicial system is too lenient on foreigners, especially white ones. We let these individuals get off too easy especially with their governments get involve. A Bahamian can’t go to another country commit a crime and get off so easily. Have no pity on her. She don’t need bail. Keep her locked up the same way you would any suspect in such a gruesome murder. She will adjust nicely in HMP.

what an absolutely pathetic comment. what an earth has being foreign, Bahamian, white or Black got to do with this. it is a tragic situation and Realone comment merely demonstrates her/him to be one of those D grade graduates

Well let's see how long the government's "no bail for murder accused" starts to yield positive results. The summer is approaching and crime increases. Hopefully not too much this year as more and more murderers will be locked away and off the streets. And hopefully to speedy trials

She certainly "looks" like shes not adjusting well to Fox Hill! Guilty....More than likely...But someone of "means" in any first world country would be sent to a "country club" prison i.e. Bernie Madoff.

Fox Hill can actually make a profit from her if they had an once of sense....But I wouldn't bet on them!

It seems to me a lot of women are denied bail in the Bahamas. What's up with that? The hardened criminals are granted it and back on the street in no time gang banging. Makes no sense to me.

Comrades let's all pray our justice system never does away with the question of whether or not to release an accused on bail pending their case resolution. From what I read, the Justice was not satisfied that given the timeline, a proper evaluation to grant the accused lady bail, could be given. An important part of bail evaluation should always be, is the community at risk if the accused re-offends?

Actually, her husband was a chiropodist; not a podiatrist. Educationally speaking, there's a big difference between the two. Also, her husband was never remotely eligible for licensure in the USA. Yet he apparently made money doing podiatry in the USA. Legally, Mr. Vasyli could never work in the USA as a podiatrist because he didn't have the educational qualifications to do so. Her husband did advertise on USA airwaves that he was a podiatrist. Without being educationally eligible for a license, however, it was illegal for him to advertise that he was a podiatrist in the USA when he was never a podiatrist in the USA. If Mr. Vasyli's wife knew these facts, then that could have been a source of contention. Maybe we'll never know what motivated the alleged crime. Don't forget that she is "innocent until proven guilty". Allow this lady to have her day in Court. She is entitled to a defense, no?

i think this being a possible reason for his murder is so far fetched one has to admire you for thinking out the box. Tragic situation, very sad

Actually, you are incorrect. He was a podiatrist - do your research. It is irrelevant whether he could practice in the USA or not, he was murdered!! The wife has been charged and will get her day in court. No one deserves bail on a murder charge.

Dano_5O You are 100% wrong regarding his alleged "podiatry" credential. Mr. Vasyli only completed two to three years of chiropody school education. Mr. Vasyli was not eligible to even fill out an application for license in the USA. Yet, it appears from numerous witnesses stepping forward that he conducted ongoing alleged "podiatry" business services all over the USA...yet he resided in the Bahamas...it's all very fishy. It will be interesting to hear what Mrs. Vasyli has to say about her husband's business affairs being conducted within the USA without a license to practice anywhere in the USA. Was Mrs. Vasyli framed or did she commit the crime herself? Suspicious "business practices" sometimes leave interesting paper-trails?

Dano_5O: Mr. Phillip Vasyli graduated from the Chiropody School in Sydney, NSW circa 1979. Australia does not have ANY podiatric medical schools. He was a chiropodist. Truth & facts are ALWAYS entirely relevant. He could not legally practice in the USA. Only the Court knows if she deserves "bail" on what is alleged. Surely his wife knows how he made his money in the USA. Do your research. People that know her say that she was a very nice person.

People said Ted Bundy was a nice person too. In reality no one knows what goes on behind closed doors. Another life wasted. I hate seeing people in handcuffs. The young boys from the inner city are especially disturbing, unlike this lady the odds are always against them

Comrade Stameko, when you deny bail it's like the accused watching their freedom slipping away toward the horizon. The longer an accused remains in the protective custody of the state, their hope of freedom becomes smaller and smaller. But they (or you and I, if found in the same situation) can only hope - there is someone on a faraway shore, willing to stand for their freedom, until proven guilty. A far away shore that can look to be a world away. Amen!

I have personally know Donna for some 20 odd years and believe me when I say she may have murdered Phil, but no one knows what goes on behind closed doors. I have seen the damage done before they even moved to Nassau.

The truth will come out as there is so many people willing to speak out on her behalf.

Comrades without expressing an opinion over the guilt or not guilty or guilty but with some justification of events leading up to the death of the now deceased, there's nothing prejudicial, unfair or biased about my commenting, how wrong the media reports can be when it comes to their apatite to feed the public's perception, about how easy it is for an accused to be granted bail in Bahamaland - cuz it is a damn boldfaced lie.

Don't really understand the Tribune's policy here. I thought "comments were disabled" for all on-going criminal matters that were before the courts.

There are some very strange view points above. If we review precedent in the courts, numerous known criminals are released on bail and far too many on murder. Over ninety percent of these persons released are complete morons with no serious financial foundation. I have no idea why this woman who obviously has access to substantial assets for bail cannot surrender her travel documents and wear an ankle tracking device. How many of those on bail are in position to post a true realistic bond and even surrender a passport? If above commentary is based on race and economic rationale then it is a good time for any intellectual to consider this paradise lost. I do not know this woman and I do think she is an ass to be in this position however I do not suspect her to be an assassin.

It's official: Mr. Phillip Vasyli never was accepted into a podiatric medical school anywhere. Is Mrs. Vasyli being framed into something she never did? There are no reports of a confession forthcoming from Mrs. Vasyli?