Three Dead After Shooting And Stabbings 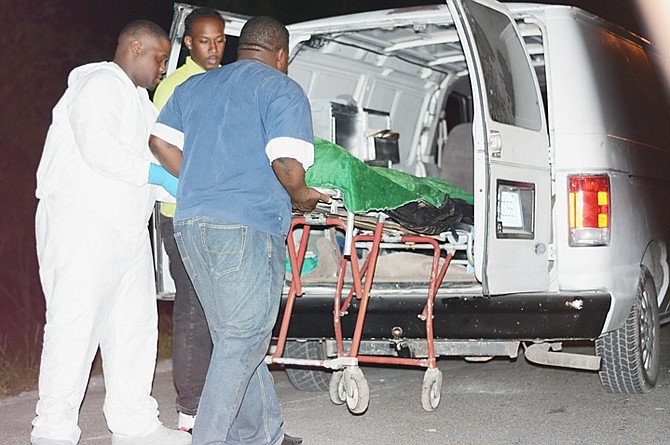 The body is removed from the scene of the shooting in Yellow Elder Gardens.

THREE men were killed in separate incidents yesterday - one in Grand Bahama - bringing the year’s murder toll to 41 for the year, according to The Tribune’s records.

Shortly before 9.30pm, police were called to the scene of a shooting at Graham Drive in Yellow Elder Gardens, where a male was found dead in his car.

While police were processing that scene, they were alerted to reports around 10pm that a man was stabbed at Roberts Drive in Nassau Village. Police believe that killing stemmed from a domestic dispute between a man and his juvenile nephew who was arrested shortly after the incident.

Chief Superintendent Paul Rolle said when police arrived in Yellow Elder, officers found a 24-year-old man sitting in the driver’s seat of his 1997 Honda Prelude, with gunshot wounds to his body.

EMS pronounced him dead on the scene.

“Our preliminary information is that this male was sitting in his vehicle when he was accosted by we believe at least one male, who discharged shots into his vehicle, fatally wounding him,” Chief Supt Rolle said at the crime scene in Yellow Elder Gardens.

“While here on this scene, police, we also received reports of a stabbing incident in the Roberts Drive (area in) Nassau Village, off Alexandria Blvd. Information there is that a young man and a relative became involved in an argument. The younger, who we believe is a juvenile, took a knife and stabbed his uncle to the chest, fatally wounding him to the chest.”

Meanwhile, police in Grand Bahama are investigating the early morning homicide of a man in Freeport.

A young man was stabbed to death, pushing the homicide count for the year to five in Grand Bahama.

The unidentified victim, believed to be in his 20s or 30s, was taken to the Rand Memorial Hospital, where he was pronounced dead.

No arrest has been made and police are investigating the matter.

According to Inspector Terecita Pinder, police were called shortly before 4am to an area on Adventurers Way, commonly known as the ghetto.

When officers arrived at the scene, she said they found a man suffering from apparent stab wounds in his chest. The victim was taken by EMS personnel to the hospital.

Inspector Pinder said police are appealing to the public or anyone with information that can assist them with their investigation to call 242-350-3107/8, 911/919 or the nearest police station.

The murder comes after three men were killed – one in Long Island – in three separate incidents over a three-day period.

A 43-year-old male resident of Long Island has been arrested in connection with this incident and is expected to face court charges today.

Police are also investigating the deaths of Harry Gardiner and Mark Daniels Jr, both 21.

Gardiner, who was out on bail, was murdered on Friday night while playing a game of dominoes on First Street in Coconut Grove.

Daniels was shot dead while walking near Dumping Ground Corner on Saturday. He was recently released on bail for an indictable offence. He was also wearing an ankle-monitoring bracelet, police confirmed.

Gonna need a bigger van!! 3 in one night...we are doing a GREAT job Bahamas...let's keep doing what we are doing!!

As long as they are the OPPOSITION!

Why does this moron continue to blame the government for the violent actions of these killers? How stupid are you? You give new meaning to the word stupid. Has it occurred to you that these low-lifes only know how to do two things? Fornicate and kill.

The Bahamas needs to build a new prison on one of the family islands and send these killers to a hot rock in the middle of nowhere.

The government is entirely responsible. These problems stem from a failing education system, broken families, and little to no support or way out of poverty. Putting more people in prison will not help the situation, giving them options and opportunities early in life leads them away from crime before they start. Crime and murder now is the result of decades of failed social programs and decaying education system. The reason they only know how to fornicate and kill is because they have never been taught anything else.

So what about the so called parents? Do they not bare some of the fault? Is the government responsible for child rearing now? This is the most absurd post I have ever read on this site, and I've read a lot of 'em. Blaming the government entirely for the social ills plaguing our nation... I admit, they should bare some of the blame, but all? I completely disagree. Remember the old adage, "it takes a nation to raise a child". That means everyone, neighbors, the church, aunts, uncles, school, the gov't., etc. Education and teaching should start in the home. The social ills we face are as a result of the breakdown of the family structure, plain and simple. Children having children, and not teaching them how to be law-abiding, contributing citizens of the society. To blame the government entirely, whomever they may be, PLP or FNM, I feel is wrong.

3) Failure to educate the mass's

They were unprepared to do anything else except fornicate for pleasure, and kill in place of reasoning.

The earth is filled with violence and mayhem and the Bahamas is surely getting its share. But in the US seven people were shot in one incident during spring break in Florida. Police shot a man in Illinois right times in his back after he stopped the man for a broken tail light and he tried to run away. Fifteen policemen ambushed and murdered in Mexico. A father of seven had his electricity disconnected. He hooked up a generator in his kitchen and he and the seven children were found days later. All dead apparantly from carbon monoxide poisoning. The enemy appears to be winning but faith teaches that this too will pass.

Get your facts together, the guy who was shot in the back was from South Carolina...not Illinois. Sheesh!

Are you asking where he was from or where was he shot?

Sad, but so true.

The difference between violence in U.S, Canada, UK & Bahamas is there are places in those first 3 that have not had murders or violent crimes in decades. Violence can happen anywhere but because of size and economics u have certain choices to avoid high crime or highly populated areas so people are not paralyzed by fear like in the Bahamas especially Nassau. When I'm home getting robbed or killed is a constant thought, it's just stressful to be looking over your shoulder all the time because of the frequency of violent acts on such small islands, I cannot just move 50 or 200 miles away to better environment. Even driving is extremely stressful, nobody follows the rules and half the population don't have insurance or legal vehicles. Face it, drastic changes have to happen or we're left forced to live in a police state to survive.

I am very sad with all these mishaps, which is why I would like to send myself condolences to the families of those peoples. In most cases, a honest opinion from a completely foreign person can help to overcome that difficult time. http://www.toot.ro/author/bianca/ ">Sloane

A few years ago I gave the opinion that the economic and social direction the country was taking was not one in the best interest of ithe country or its (native) people. What we have done basically is snatch all the people off the family islands and crowd them ion New Providence. The lure was good paying jobs in the hotels or secure jobs with government. This worked for many persons who were willing to change their lifestyles, better their education or compromise themselves but it left a large segment of the population, mostly males, excluded. They were, by natiure, blue collar workers or field hands and even after a few try's at it they did not fit in in the hotel or corporate setting. So they created a sub-society where they engaged in the drug trade, gambling and other illegal activities to sustain themselves. These activities paid a pretty penny, and even though many of these men spent most of their lives before the courts or in and out of jail, they had respect for life and our murder rate was less than half of what it is today. Now Today, some two and a half decades after the mass exodus from the family islands began, we are faced with the second and third generations of this sub-society. To make matters worse they have now been intermingled with the Haitian-Bahamian sub-culture, gang warfare has been introduced into the mix. Many come from single parent homes, some whose fathers have been killed or are in jail and they feel more isolated from the rest of society than ever before. The drug trade and other activities that their fathers engaged in are no longer lucrative and jobs are even more scarce than before. These people are angry, many feel lost or betrayed and still many are economically desperate and socially empty. They are the ones who will kill in the blink of an eye and until we address this monster that was created over the pass thirty years we may as well start packing our bags now. It will consume us. The problem is too big for Urban Renewal 2.0 alone to fix

Three murders from three separate incidents in a single day and no-one is really surprised or shocked - just another day in paradise! Time to throw the outdated slogan 'It's Better in the Bahamas" into touch. It really isn't better, not at all.