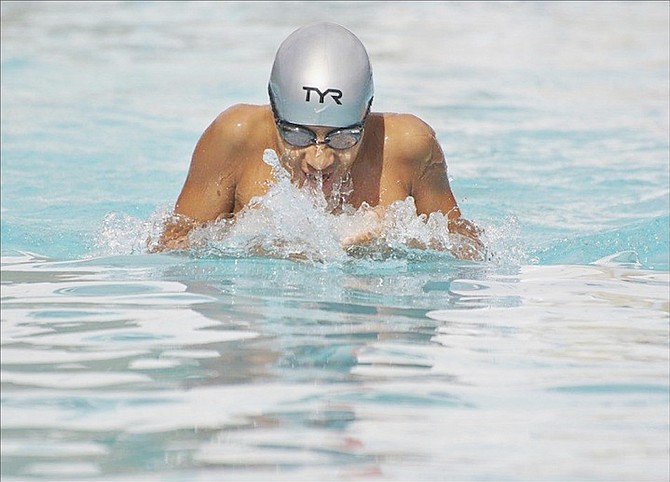 IZAAK BASTIAN finished at No.7 in the boys 13-14 division, highlighted by gold medals in the 50m and 200m Breaststroke.

Even after the Bahamas claimed its second consecutive CARIFTA Swimming Championships in the pool Tuesday night, the medal haul continued in the open water yesterday.

Joanna Evans continued her domination of the meet with a gold in the girls 15-17 division, while William Russell added silver in the boys 13-14 Open Water 5k at Carlisle Bay, Barbados, to conclude the 30th edition of the meet

The Bahamas won the meet again with a total of 756.50 points, more than 100 points ahead of the host team Barbados, who was second with 642.50 points.

Trinidad and Tobago finished third with 494.50 points, Guadeloupe was fourth with 478 points, while Jamaica rounded out the top five with 456 points.

Evans, the Bahamas Swimming Federation’s junior swimmer of the year, lived up to her lofty expectations as team leader as the high point scorer for the team and the girls 15-17 with  77 points.

Albury Higgs was second in the division with 64 points.

Cecily Bowe led the girls 11-12 team with eight points and finished at No.17 in her division.

The Bahamas has been one of the top teams at the CARIFTA level with consistent finishes over the past four meets.

In 2012, while hosting at the Betty Kelly-Kenning Aquatic Centre, the Bahamas finished second with 657 points and 49 medals.

At the 2013 meet in Kingston, Jamaica, the Bahamas finished fifth in the team scoring with 509 points and was sixth in the medal count with 29, including eight gold, 10 silver and 11 bronze.

In 2014, the Bahamas topped the standings for the first time in Savaneta, Aruba.

“It’s so good when we have our top athletes excel. We have more kids now who are legitimately looking to make these teams because they are eager to represent the country at a high level,” Knowles said.

“There are a lot more elite meets for kids to get into compared to about 20 years ago when you just had CARIFTA, CCCAN, CISC Pan Am, Worlds, Olympics and Commonwealth, now they have meets like the Junior Worlds, Junior Olympics and Junior Pan Ams. There are a lot of high profile meets and a lot of opportunities and it encourages these kids at the CARIFTA level to see other kids who are able to go to college, make those bigger meets and be on the world stage.”

In this day and age of many of our children going astray these youth should make the entire nation proud. To bring the CARIFTA Championship home for the second time in a row is a major achievement. I truly hope that they are acknowledged and appreciated as they should be for this major success in representing The Bahamas.

Congratulations to this group of youngsters whose achievements have made us proud! Why is it that swimming is not acknowledged and supported in the same way that track & field and basketball are? No parades or prime ministers meeting them at the airport or honouring their achievments. We need to support and encourage these young people for being shining stars in the Bahamas.

What a bright shining beacon these young athletes are for this nation. I for one am thrilled at their success and wish them nothing but the best in their future endeavours.

Nope...the swimmers brought home an overall GOLD...FIRST place, yet they got NOTHING...but oh boy...the track crew got 2nd...let's raise the roof and party!! Another very shameful moment in the way our Bahamas looks at sports. It's like it's track and field or nothing!! I'd be very disheartened to be a swimmer coming home like that.