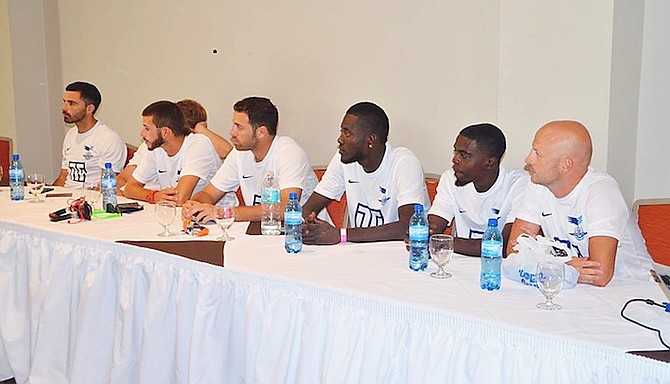 MAKING HISTORY: The Lyford Cay Dragons FC are one of 15 teams from nine member associations to compete in the 17th edition of the 2015 CFU Club Championships tournament.

For the first time in Bahamian football history, a local club will represent the country with the best clubs from around the region in a champions event.

The Lyford Cay Dragons FC are one of 15 teams from nine member associations to compete in the 17th edition of the 2015 CFU Club Championships tournament.

Teams entered into the competition are from Guyana, Antigua and Barbuda, Trinidad and Tobago, Suriname, Jamaica, the US Virgin Islands, Guadeloupe and Haiti.

The group stage will be hosted in three locations, with the Bahamas playing in Group 4 in Haiti alongside Helenites, Unite Sainte Rose and Don Bosco FC Petion Ville.

The Bahamas took on Don Bosco FC de Petion Ville, however results were unavailable up to press time last night.

This stage will be hosted until April 19 before the four winners advance to the final round which is scheduled to be played May 22-24 at a location yet to be decided.

The three top teams will qualify for the 2015 Confederation of North, Central America and Caribbean Association Football (CONCACAF) Champions League.

Thirty National Associations affiliated to the CFU are invited to participate with their National League or Cup Champion and Sub Champion, although many member nations do not send a representative team every year.

The CFU presents an exact replica of the CFU Club Champions Cup trophy to the winning team for their permanent possession.

Since being founded in 1997 all championships have been won by clubs from Jamaica, Trinidad and Tobago and Puerto Rico.

While the Dragons represent the country on the field, simultaneously, the CONCACAF Congress is being hosted here in New Providence at the Atlantis resort on Paradise Island.

Yesterday the CFU hosted its own meeting prior to the event. It will be the third CONCACAF Congress under president Jeffrey Webb who is running unopposed for leadership.

The Bahamas has established a reputation as one of the top hosts in the region when they became just the fourth country in the CONCACAF region to host the FIFA Congress when they did so back in 2009.