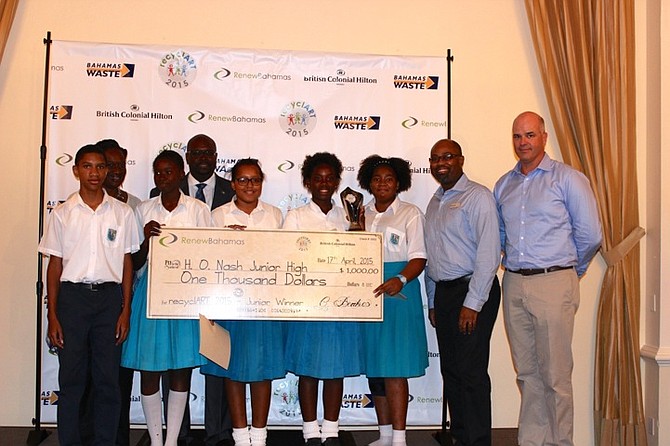 THE winners of the inaugural Renew Bahamas recyclART competition were announced yesterday during an awards ceremony at the British Colonial Hilton.

Environment Minister Kenred Dorsett called the initiative "innovative", saying the concept behind the competition is key to ensuring that the present generation develops an appreciation for the environment that previous Bahamian generations did not have.

"If we truly are working to develop a culture of recycling in the Bahamas it begins with the children, so I think efforts that are being advanced by Renew Bahamas and Bahamas Waste to speak to the importance of recycling through art really is a wonderful idea," Mr Dorsett said.

"It will only stand to advance all of the other efforts our NGO communities are advancing already in schools around the country.

"This just adds to the compliment of programmes that sensitises our people to the importance of protecting our environment, keeping it clean and - more importantly - recycling waste."

RecyclART 2015 submissions were reviewed and judged by a panel of professional artists that included Director of The National Art Gallery of The Bahamas (NAGB), Amanda Coulson; Director of Doongalik Studios, Pamela Burnside; the Ministry of Culture's Visual Arts Officer, Ellery Deveaux, and Assistant Curator of The NAGB, Averia Wright.

Renew Bahamas awarded each of the winning schools a $1,000 cash prize.

LCIS art teacher Sandra Illingworth said the competition presented little challenges for her students because recycling is common practice at the school, which considers itself a "green school".

Mrs Illingworth said "recycling is something we place a lot of emphasis on from the primary school level all the way up to our older kids, so this competition was a welcome opportunity to display our love for recycling.

"A group of our students had just completed a recycling piece a few weeks before we started work for this event. We used used plastic water bottles to make little trees so the transition into this project was easy."

Rounding out the top three in the junior and senior divisions were St John’s College and Aquinas College.

As a part of the competition all ten submissions were displayed on social media and the public were invited to vote for the piece they considered to be the best representation of recycling.

As a result of the voting, Adasa Lightbourn, 13, of T A Thompson Junior High School was named the 2015 People’s Choice Award winner and presented with a $500 cash prize by partnering company Bahamas Waste.

President and CEO of Renew Bahamas, Gerhard Beukes, said that globally the treatment of waste remains a major problem. He explained that his company is trying to find unique and creative ways to educate the Bahamian public, particularly young persons on the importance of recycling.

Renew Bahamas is the solid waste management company contracted by government in January 2014 to manage and operate the nation’s largest landfill. Company officials have said they are focused on establishing a sustainable waste management industry in the Bahamas.

The multi-faceted, 125,000 square foot facility once completed would reduce the landfill’s “environmental footprint” and occurrence of fires they claim.