Widow Accused Of Murder To Have New Bail Hearing 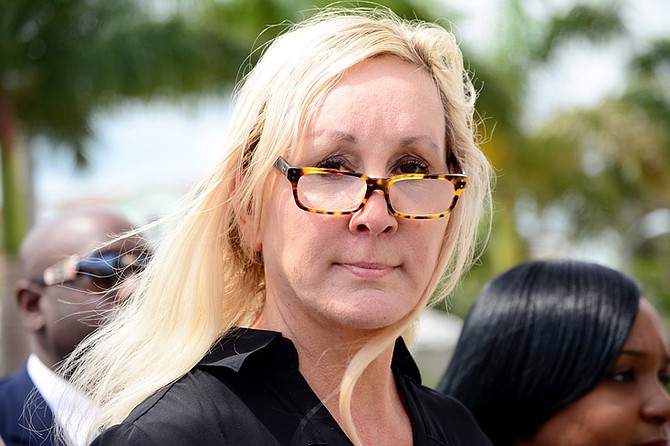 COURT of Appeal judges yesterday ordered a second bail hearing within 48 hours for the Australian widow of murdered millionaire podiatrist Phillip Vasyli before the same Supreme Court judge who had previously denied her bail.

Donna Vasyli, 54, appeared before Justices Anita Allen, Abdulai Conteh and Jon Isaacs on Monday contesting Senior Justice Stephen Isaacs’ decision to refuse her a bond ahead of trial in connection with the fatal stabbing of her husband at their Old Fort Bay home one month ago.

Following nearly two hours of submissions from applicant and respondent counsel, the judges came to the unanimous conclusion that Senior Justice Isaacs had not arrived at a finding as to why he had denied her bail in accordance with the law.

Vasyli, the court ruled, will remain on remand until her Supreme Court appearance.

Elliot Lockhart, QC, and Murrio Ducille appeared for Vasyli in both courts since the issue of bail arose, but it was the latter that argued the application in the appellate court.

“Did they concede that?” Justice Conteh asked.

Justice Isaacs said the concession was made in that context. Justice Allen, Court of Appeal president, agreed, highlighting that Crown respondent Neil Braithwaite’s comment was relative “to the speed in which the bail application was moved.”

At her March 30 arraignment before Chief Magistrate Joyann Ferguson-Pratt, Vasyli was denied bail, as the chief magistrate did not have the jurisdiction to consider a bond.

Her lawyers, though, were able to get a bail hearing days later in the Supreme Court before the Easter holiday.

Senior Justice Isaacs noted the unusual speed in which the bail application appeared in the Supreme Court. However, he said that there had been no unreasonable delay in the case nine days after the alleged murder and noted that Vasyli had not sufficiently satisfied the court that she should be granted bail.

Vasyli was informed of her right to appeal the ruling to the appellate court.

“To begin with,” argued Mr Ducille in the appellate court, “there would have to be prima facie evidence to support a charge. One does not charge and then find evidence”.

Mr Ducille said the decision to deny bail was unreasonable given that his client has permanent residency and has not run afoul of the law since living in The Bahamas for the past 20 years.

“Stringent conditions could be imposed and there was no evidence to suggest that she is a flight risk,” Mr Ducille added.

“The affidavit of police Sgt Barry Smith, is that no evidence for the court to consider?” Justice Isaacs asked the lawyer.

Mr Ducille submitted that the evidence was “not sufficient.”

“Do you have to flee first?” Justice Allen asked.

The lawyer referred to the case of Cuban-Americans Daniel Ayo and Luis Mendez, who were released on $50,000 bail for the 2010 murder of Jamaican Clive Tomlinson in Bimini.

The Court of Appeal approved the decision to grant bail for Ayo and Mendez after a challenge by the prosecution.

Mr Ducille argued that unlike the pair who were involved in a crime within 48 hours of visiting The Bahamas and still got bail, Vasyli has “substantial ties to the jurisdiction.”

While acknowledging that each case is heard on its own merits, Mr Ducille also asked the court to bear in mind that the Crown eventually discontinued the case against Ayo and Mendez.

“They had medical conditions,” Justice Conteh said in reference to the bail decision in that case.

Justice Allen noted that in this case, the judge appeared to have accepted that Vasyli was a flight risk and had not proven that she should get bail.

Mr Ducille argued that notwithstanding recent amendments to the Bail Act, the “statute runs afoul of the Constitution.”

“There’s nothing before us asking us to make that declaration,” Justice Isaacs said.

Justice Allen said the significant issue at hand was “whether the decision of the learned judge was a reasonable one relating to the facts before him.”

Justice Allen noted that, based on the affidavit, Vasyli admitted that there was an altercation between her and her husband on the evening in question and that there was evidence of “apparent injuries” to her hands.

“Even if we were to accept that, that is not enough to refuse bail,” said Mr Ducille.

Justice Allen also pointed out the mention, in the affidavit, of his client’s access to significant resources and other homes and properties.

“Her husband may have but not her,” the lawyer said.

Mr Ducille told the court that it could impose the most stringent conditions it saw fit.

In response, Mr Braithwaite maintained that his remark regarding the “scant” evidence related to the speed in which Vasyli’s application appeared in Supreme Court.

The prosecutor also noted that it has been stated in the Crown’s submissions that the case is a circumstantial one.

Justice Conteh asked the Crown if the affidavit was asking the court to conclude that Vasyli “is a flight risk” notwithstanding that there were no clear or detailed facts regarding “the properties here and abroad.”

“The facts of the affidavit refer to the assets and ties to the jurisdiction,” Mr Braithwaite submitted.

“Is there any finding by the judge as to why he denied bail?” Justice Allen asked, adding that it is not very clear.

“I accept that it is not as it could be,” said Mr Braithwaite. However, he added that the decision to deny bail stemmed from the information presented and the concern that the applicant was a flight risk.

“Was there any indication that the learned judge considered conditions that could have been attached?” asked Justice Isaacs.

“There’s no indication of that,” the respondent said.

Justices Isaacs noted that available conditions such as house arrest, electronic monitoring, daily reporting conditions, and surrender of travel documents to assure attendance at trial was a factor in determining whether or not to grant bail.

Mr Braithwaite said the court could remit the matter back to the Supreme Court.

Justice Conteh said the appellate court had the power to consider bail.

However, the judges did unanimously agree that the judge did not explicitly give reasons for the refusal of bail.

“In the circumstances, we’re going to allow the appeal and remit the matter back to the judge,” ruled Justice Allen, who further directed that “this application be heard within two days of today.”