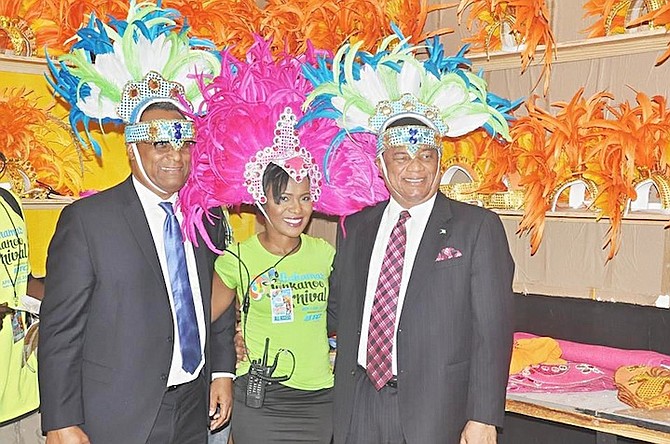 THE Bahamas National Festival Commission yesterday announced that the group has formed a partnership with international entertainment conglomerate Sony Music ahead of the Nassau launch of the inaugural Junkanoo Carnival.

Officials from the BNFC revealed during a press conference that an executive from Sony Music will assist in the judging portion of the Music Masters song competition finale.

BNFC CEO Roscoe Dames said that the group is “confident” in the artists they are putting on the world stage at the May 8th concert.

He said the commission is working to give the “new wave of Bahamian musicians the support they need to be the cultural leaders.”

Mr Dames added that as a result of the partnership, the winner of the song competition would receive promotional support from the record label.

Culture Minister Dr Daniel Johnson said the government is using the upcoming cultural festival to put value on Bahamian culture. Dr Johnson added that the festival is about music “you can dance to.”

“This event has proven exactly what the prime minister, the minister of tourism and myself thought, the event has legs. There are four components of this thing, it involves all of the features of culture: music, art, dance, food, all the four features are present,” he said.

“Music is the driver, creative arts will be there, the dance part of it will absolutely be present with the road march, Road Fever. This is about music you can dance to – this is about the dance music of The Bahamas.”

According to the Carmichael representative, the Christie administration is working to make the event an “enormous success”.

“Last week (in Grand Bahama) we saw 20,000 Bahamians come out and pay to see their people. Rawson Square has been transformed – all of the bands are on display for persons to see, it is here at last.

“The world will be here and the stage is yours.”

The press conference was held to commemorate the success of the first round of the Music Masters song competition held in Grand Bahama last weekend.

Initial reports suggested that 30,000 persons turned out to support the kick off in Grand Bahama. Royal Bahamas Police Force officials claimed 10,000 people gathered for Junkanoo Carnival on Friday, while an additional 20,000 others attended on Saturday, BNFC Chairman told The Tribune earlier this week.

Singer Tyrone “Plati” Dread called for an end to the “negativity and viciousness” surrounding carnival discussions. The “Junkanoo Rock” singer said the music and cultural industry had been suffering for a long time.

“This event has taken on a life of its own, you know the parts is never as great as the whole. I have been around long enough to see our music industry thrive, then struggle, then die and then no one cared for it. Now suddenly here comes the government, I thank the prime minister and Batelco for having the passion to see what was happening to us and to actually reach down and say to us get up off your mat and walk.”

• Junkanoo Carnival is scheduled for May 7-9 in New Providence.

"...Dukakis and the tank. The image of the diminutive Massachusetts governor pretending to be something he wasn’t and, in the process, making a fool of himself on Sept. 13, 1988, has haunted me, as it has every other advance person who has been entrusted—for a few hours or even a few minutes—with a candidate’s fate."

"Like Bennett, I too worked on the Dukakis campaign, and we went on to serve together in the Clinton White House. I sat in countless meetings in which some smartass warned that a stop on the president’s schedule had the makings of a “Dukakis in the tank moment.” The caution usually came when some type of costume was involved, and the tank ride is still to this day invoked anytime politicians decline to put hats on their heads—as President Obama did earlier this year when he was handed a Navy football helmet but refused to try it on. (“You don’t put stuff on your head if you’re president,” he said. “That’s politics 101.”) But the story of the disastrous tank ride also endures as an example of the broader laws of unintended consequences in political stagecraft."

I have nothing else to add other than , are those female hats they have on their heads?