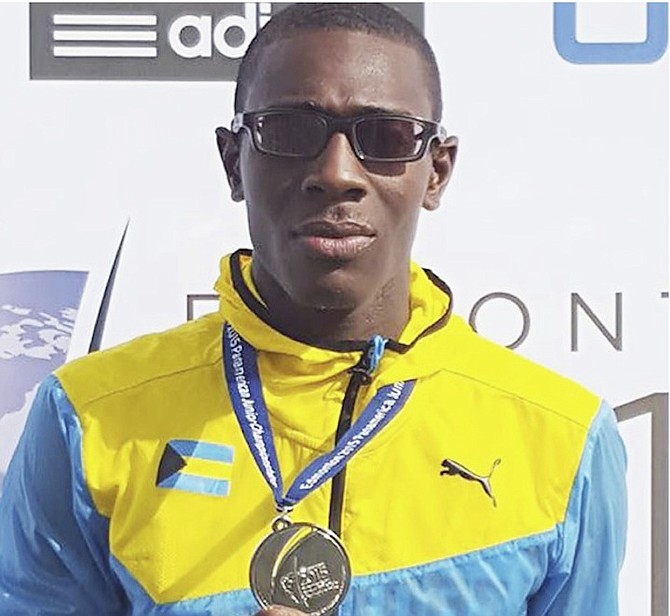 SWEET SILVER: Laquan Nairn shows off his silver medal that he won in the long jump at the Pan Am Junior Track and Field Championships in Edmonton, Canada.

Laquan Nairn soared to the lone individual medal as the Bahamas added two more in the relays at the 2015 Pan American Junior Track and Field Championships in Edmonton, Canada.

However, in his specialty in the high jump, Nairn was only able to go over 2.06m (6-feet, 9-inches) for ninth place.

The Bahamas’ team of Jordan Minnis, Donovan Storr, Janeko Cartwright and Henri Delauze just missed out on closing out the three-day meet by having the national flag raised again with a fourth place finish in the men’s 4 x 400m relay in 3:10.02. Jamaica got the silver in 3:08.23 and the bronze to Canada in 3:09.91.

There was no team from the Bahamas entered in the women’s 4 x 400m relay.

A number of Bahamians competed in other events, either making the final or falling short of advancing.

Henri Delauze had to settle for eighth place in the final of the men’s 400m after clocking 47.90. Jamal Walton of the Cayman Islands pulled off the gold in 46.09 ahead of American My’Lik Kerley, who did 46.33 for the silver. Jamaican Renardo Wilson got the bronze in 46.59. DeLauze had the fifth fastest qualifying time of 47.88.

Keianna Albury was seventh in the women’s 200m in 24.22. American Deanna Hill won the gold in 23.18 with Brazil’s Victoria Cristina Rosa the silver in 23.42 and Barbados’ Sada Williams the bronze in 23.49. Albury advanced out of the preliminaries with the sixth fastest time of 24.06. Jenae Ambrose was 12th overall in 24.43, but didn’t make it.

In the preliminaries of the women’s 100m, Ambrose had a best time of 11.65, which placed her 10th overall and out of contention to advance to the final.

Xavier Coakley didn’t finish the final of the men’s 110m hurdles as Misana Vilz of the USA ran away with the gold in 13.30. Roger Valentin Iribarne of Cuba got the silver in 13.32 and the bronze went to Ricardo Torres of Puerto Rico in 13.49. Coakley advanced to the final with the sixth fastest qualifying time of 13.86.

None of the competitors advanced out of the men’s 100m preliminaries with Javan Martin 11th overall in 10.48 and Keanu Pennerman 14th in 12.96.