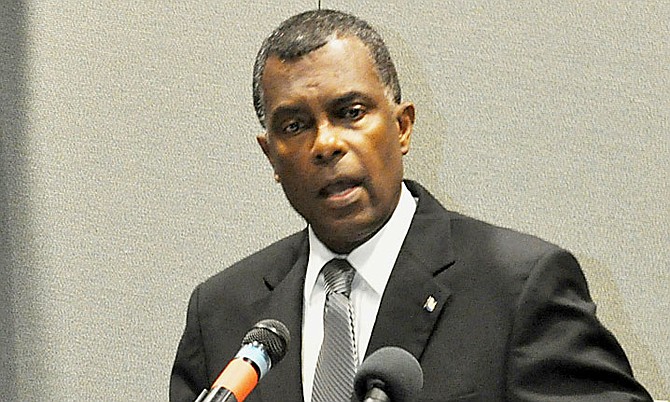 BAHA Mar yesterday declined to comment on the revelation that its developer Sarkis Izmirlian was under investigation by Ministry of Foreign Affairs and Immigration Fred Mitchell.

On Friday, Mr Mitchell told The Nassau Guardian that he had ordered a closer look at Mr Izmirlian’s “file” due to complaints about his “conduct in the country”.

However, he refused to clarify further when contacted by The Tribune yesterday.

Yesterday, in response to questions from The Tribune a resort spokesperson said: “Baha Mar is focused on doing all it realistically can to have the resort’s construction completed properly and opened successfully as soon as possible. Baha Mar is not going to comment on Minister Mitchell’s statements.”

The investigation follows Mr Mitchell’s public recrimination of the Baha Mar developer last week, when he warned that permanent resident status could be revoked if the status holder behaves in a way that is not in the public interest.

During an Emancipation Day speech, he added that an invitation should be extended to Mr Izmirlian to “consider making the appropriate steps to live elsewhere if he does not wish to conform to the mores of conduct of those who are economic guests in our country.”

Mr Mitchell has repeatedly chastised Mr Izmirlian over the resort’s bankruptcy filing and what he termed as numerous “attacks” on Prime Minister Perry Christie’s handling of the matter.

However, Mr Christie confirmed last week that Mr Mitchell’s comments did not reflect the position of the government. He told reporters that he accepted the critical remarks as an emotionally motivated defence to what was perceived as disrespect from the developer toward the Office of the Prime Minister. However, Mr Christie stressed that the government’s official position on the matter could only come from him.

In a memo sent to Baha Mar employees last Tuesday, Mr Izmirlian said in his 13 years working on the Baha Mar project, he “never imagined” he would be “fighting” with the government over the $3.5b Cable Beach property.

Baha Mar filed for Chapter 11 bankruptcy in a Delaware Court on June 29; however, the resort’s application to have the US proceedings recognised in the Bahamas was rejected.

However the resort has been granted leave to appeal the decision.

Meanwhile, the government’s winding-up petition against the $3.5 billion mega resort to bring in provisional liquidators will be heard on August 19.

The resort has been locked in negotiations with its lender Export-Import Bank of China and general contractor China Construction America in a bid to reach an out-of-court deal to complete the project.

Here's something our distastefully stupid Minister of Foreign Affairs probably does not appreciate. We don't need a harbour anymore.....all of the cruise ships will soon being going to Cuban ports instead! And when we get put on the various global lists for money-laundering activities, terrorist-related activities and human rights/smuggling abuses, the U.S. will announce the closure of its pre-clearance facilities and impose travel restrictions on Americans coming to the Bahamas and on Bahamians going to the U.S. The U.S. government and its controlled financial agencies (IMF, World Bank, IDB, S&P, Moodys, etc.) have already begun to activate certain aspects of "Operation Yellow Bird", a covert operation directed at making the Bahamas the most undesirable place on the planet for the Chinese to set up shop. In the course of rendering all Chinese investments in our country worthless, "Operation Yellow Bird" will also leave the Bahamas government and Bahamians still living in the Bahamas poor and destitute while Cuba becomes the re-born jewel of our region. Our naked Emperor Christie and his new found oriental friends are going to take us all down for the final count, with little to no likelihood of us ever getting back up again. Allowing the 'yellow bird' to land on America's door step was about the dumbest thing Christie and his cohorts could ever have done. As the adage goes, "You reap what you sow!"

Preach bey! Cuban was it before Castro and US chose Bahamas as the back up. Now like they want nice up Cuban again.

Reflect on who owns Bahamian money (hint: US). In fact, we don't even have money really... it's US money we use, the 'Bahamian' bills is like for tourist to pick-up and say it's cute and feel like they're not actually still in the States (though they are in a state effectively run by the States).

What always does kill me is why the Bahamas gov't is so up in the Chinese pants (ans: Chinese puttin money in dey pants). Look at how China is do it's own people and then come tell me who want dem do the same thing to Bahamians. Bey y'all is fool or what

Yep, it was somewhat perplexing when the US bank agreed to accept shady gaming money from BOB. But in hindsight it just made it easier for them to nab someone at a later date for laundering money over state lines. They've indicted Adrian Fox ALREADY. That means they must have evidence of his illegal human smuggling. The only reason he's not in a US court at the moment is because his lawyers (Davis &Co?) are currently blocking the move. When enough pressure is applied he will go the way of Ninety. The US is waiting to drop the hammer on this clueless corrupt and conflict riddled government. The only thing that can save us is an election

Very well said. This is exactly how the United States operates. They collect information, watch targets, and bide their time until they are almost 100% sure they’ve got you. Then, when you least expect it, the big bad hammer drops.

When the government and the Chinese attempts to steal Izmerlian's resort is exposed we will not have to worry about foreign investment for decades.....

That Sir Baltron letter is a bombshell. If the government were a private company they would have been sicced with fines

It's fitting that Baltron was the one to set out in writing the government's conspiracy to defraud the Izmirlian family with the help of the Chinese general contractor (CCA) and Chinese bank (CEXIMB). Now we know why Ruffin was in town snooping around at the invitation of Christie!

Comrades how can Baha Mar's response now be: “Baha Mar is focused on doing all it realistically can to have the resort’s construction completed properly and opened successfully as soon as possible. Baha Mar is not going to comment on Minister Mitchell’s statements.”
Wasn't it the ongoing outlandish statements made over and over again by Izmarlian, that is behind all this, not Minister Freddy's.
To now step forward to suggest that izmarlin has been doing all he could have realistically done to get Baha Mar open. is to be tossing even more buckets, full pure Izmarlian poppycock.

Fred couldn't investigate his way out of a brown paper bag. His "investigation" is only more bullying tactics and to justify his most undiplomatic behaviiour. If this is our best diplomat, then God help us all. This country will be 4th world and blacklisted everywhere for decades to come.

Poor Mitchell, he's just the bucket boy anyway for PM Christie....saying what he thinks Christie want's him to say...cause he's trying to garner favor to try and get the next PM spot!!! Ain't that clear enough....brown nosing the PM....again...

Mitchell says what he wants to say because he knows how weak and indecisive Christie is. He knows he will never get the coveted spot of PM because of his romoured personal lifestyle so he has to live vicariously through the PM by usurping him on every major scandal and putting out his own press releases like he is in charge.

Frankly, it's as close to the grove as he will ever get!

Does anyone have any info regarding reimbursements, promised in writing by BaHa Mar , for non-refundable airline tickets purchased {1065$} which we could not use since the resort NEVER opened ?? Thanks so much...SAL

have you called the reservation center? They have most answers on matters like that...

Once the dillema became a court matter..they closed their reservation center..If you know a Phone # I can reach out to...that would be GREATLY appreciated...Thanks..SAL