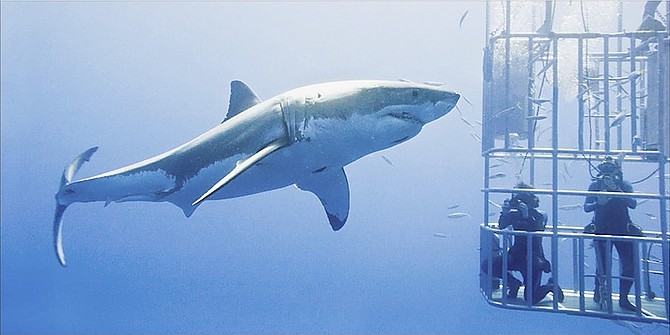 Sharks have been in the news with a series of attacks on humans, but as Mindy Pennybacker finds, more people are wanting a close-up experience with the great marine predators.

On a calm, early mid-July morning, beneath the surface of the cobalt-blue Hawaiian sea three miles from shore, a silent communication was taking place between two species of predators. An eight-foot-long male Galapagos shark slowly circled four swimmers, who kept turning to maintain eye contact with him, as they had been instructed by their guide, Ocean Ramsey.

“When you turn your head and make eye contact, you’re communicating to the shark that you’re a predator, not prey,” Ms Ramsey, co-founder of the company One Ocean Diving, had explained on the boat ride out to the dive site, a place where sharks “naturally aggregate” in waters 300 feet deep above an underwater ledge.

There, where the land slopes into the oceanic depths, she said, sharks are drawn by strong, converging currents where cooler water upwells and nutrients tend to be more abundant, attracting fish. The shark was beautiful, a long streak of grey with a white belly and white flashing along his fins. He swam without visible effort, muscles lightly rippling in the clear underwater light, scarcely seeming to move his fins or tail. Even if you hadn’t been told, you couldn’t take your eyes off him.

As he glided past, the shark’s yellow eyes met the eyes of the humans through the glass of their face masks. There was nothing else but water between him and the divers.

Sharks are having a moment, and most of the media spotlight has not been positive.

In April a snorkeller off Maui died after being bitten by a tiger shark, and by the time the Discovery Channel’s wildly popular “Shark Week” launched on July 5, it had almost been upstaged by the media outcry over eight real-life shark attacks on North Carolina swimmers, two of whom lost an arm, and 11 attacks in Florida.

Although the string of incidents in North Carolina is unusual for that state, there has been no increase in shark attacks in the US compared to last year, according to George H Burgess, director of the Florida Programme for Shark Research and web editor of the International Shark Attack File.

“A lot’s been made of the North Carolina situation by the major national media outlets in the area. But here in Florida, where we get 25 or so of these bites a year, there’s not much press interest,” Mr Burgess said.

Still, when it comes to how the media reports shark behaviour, “it’s partly a perception problem,” he said. For instance, although no one can read a shark’s mind, Mr Burgess said that based on the great white’s behaviour in the Fanning encounter, he thinks the shark was not bent on making a meal of the surfer.

“My impression is that it looked like the shark was not specifically attacking, not barrelling up from below the way that great whites do. It just sort of surfaced slowly and sauntered its way in, in an investigative manner,” he said, noting that surfers’ paddling, splashing and boards attract the animals. “I think they’re just inquisitive.” That said, he added, the sharks will sometimes come up and bite a floating object, like a hunk of styrofoam, out of curiosity.

Despite the widely reported fatalities, maimings and bites, humans seem more fascinated by sharks and interested in encountering the fearsome creatures than ever. Witness actor Zac Efron’s dive in June with a tiger shark off Haleiwa, which got wide exposure when he shared video and photos of what he called an “epic” experience.

Shark eco-tourism, which generates $314 million a year worldwide, is expected to more than double over the next 20 years, according to a 2013 study by researchers at the University of British Columbia, University of Hawaii and the Universidad Autonoma de Baja California Sur in Mexico.

What is the allure? Based on recent interviews with participants in cage and free-swimming shark viewing tours in Haleiwa, people are motivated by thrill-seeking, curiosity and a desire to overcome their fear.

“I’ve always been so scared of sharks, but once I saw how beautiful they are in the water, now I’m in love with them,” said Natasha Brolick, 26, visiting from Melbourne, Australia. “I’ve seen sharks swimming around me from a glass tunnel at the Melbourne Aquarium, but here I was right next to them in their real environment. I loved it. I saw a shark eat a fish right in front of my face, and I wasn’t scared,” said her friend Elise Perri, 23.

The cage tours frequent a site three miles off Haleiwa, where a crab-fishing fleet used to set its baited traps 50 years ago. Although Hawaii Shark Encounters does not chum the water (an illegal practice since 2009), sharks in the area continue to associate engine noise with food.

During the ride out on the dive boat Kainani, Capt Richard Whyte and mate Darrin Whittaker gave safety briefings, pointing out the two fire extinguishers “in case we catch on fire again” and regaled the 13 passengers with facts and statistics, noting that the first sharks appeared on Earth 450 million years ago.

On deck before the dive, the crew got serious, asking everyone to keep their eyes on the captain, not the sharks circling the boat, to learn the right and wrong way to get in the metal cage and comport oneself while inside. Conditions were rough, with wind and swells, and divers were advised to grip an interior bar for stability. Whyte and Whittaker made sure everyone’s masks and fins fit correctly.

In a cage attached to the boat, a group of six viewers was quickly surrounded by 12 to 15 large Galapagos sharks. The animals circled tightly and swam much closer to the humans than had the sharks on the cage-free dive, coming within a foot of the plexiglass window and steel bars.

In the bright mid-morning light you could see the little yellow-blue pilot fish swimming in front of the sharks’ pointed snouts, remoras clinging to their sides and copepod parasites in their eyes and gills. One shark opened its mouth slightly as it approached the cage. Another took a test bite of a GoPro camera on a selfie stick protruding through the bars.

“The sharks feel safer when you’re in a cage,” quipped Hawaii Shark Encounters owner Steve Jordan. “The more people learn about sharks, the better off the sharks are,” he said, adding that after a cage dive, some of his clients sign up for a cage-free dive with One Ocean.

Certainly people are safer in a cage, but there has been controversy as to whether shark tours pose an increased risk of attack to swimmers closer to shore. In a 2009 study, co-author Carl Meyer, a researcher at the Hawaii Institute of Marine Biology, reported that cage diving off Haleiwa “had no visible effects on the movements of sharks in the area”. In other words, the sharks did not follow the boats back to shore - a concern that had been voiced by residents of the area.

So long as sharks are simply watched and not fed, shark tours are not detrimental to the animals and might benefit them by inspiring conservation efforts, Mr Meyer said. Cage-free shark viewing, however, could be detrimental - to humans, he added.

While only one cageless shark tour diver worldwide has been confirmed as killed by a shark - in 2008 in the Bahamas while the victim was feeding the animal - “why take an unnecessary risk?” Mr Meyer asked.

“We usually see a lot more sharks, but there’s only one here now, probably because they make themselves scarce when there’s a tiger shark in the vicinity,” Ms Ramsey said before the group on the One Ocean tour got into the water. She explained that tiger sharks are recognised as dominant by Galapagos, sandbar and hammerhead sharks.

One tiger shark with which they frequently interact is the one Mr Efron encountered while on Ms Ramsey’s tour. The actor was in Hawaii to film “Mike and Dave Need Wedding Dates,” with co-star Adam DeVine, who accompanied him on the dive. Mr Efron posted a video of himself grabbing onto the shark’s dorsal fin “Lifetime memories #savethesharks,” he tweeted.

Efron’s behaviour surprised Ms Ramsey, she said, because she tells divers not to touch the animals. However, she could understand his impulse, having herself made waves in 2013 by swimming with a 17-foot great white shark in California waters, hitching a ride on its fin, in order to advocate against the species’ “Jaws” reputation. Of Mr Efron, she added, “he’s trying to help with conservation and to be commended for that.”

Ms Ramsey said she recognised on of the two Galapagos shark on this morning’s tour from his nicked fin. The boat crew keeps daily logs of the shark behaviour they observe. The captain turned on the engine to attract sharks, which have excellent hearing as well as electroreceptors on their noses, called ampullae of Lorenzini, that pick up engine impulses. She surfaced and removed her mouthpiece to tell Kori Garza, a researcher, that one of the animals had exhibited “gill popping”, one of the potentially hostile behaviours divers are told to watch out for.

When one of the sharks began to swim slowly toward her, head-on but without signalling any aggression, one diver nevertheless climbed back into the boat. The release they had signed stated that sharks were wild animals over which the tour staff had no control. (In two years of conducting the tours, Ms Ramsey said, none of her clients has experienced aggressive behaviour.)

Ms Ramsey resurfaced, calling to the diver on deck, “There are three sharks now! Don’t you want to get back in and see them?” The third shark, a Galapagos about six feet long, was visible just beneath the surface. Her fear overcome by curiosity, the diver went back under to see for herself a silver fishook glinting in the corner of the big female’s mouth.

It was the third cage-free dive for Ethan Wang, 25, who lives in Manoa. When he saw sharks while out surfing, he used to panic and paddle straight in. Now, he said, he knows not to turn his back and splash away, but to face the shark and keep calm.

• Mindy Pennybacker is a features reporter with the Honolulu Star-Advertiser