Pauline Davis-Thompson Looks To Be Re-Elected 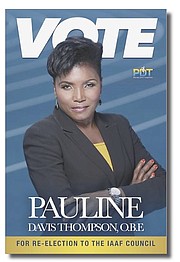 After getting elected to serve as the first vice president of the NACAC region two weeks ago, Bahamas Association of Athletic Associations (BAAA) president Mike Sands is leading a delegation to get Pauline Davis-Thompson re-elected to the IAAF Council and Dennis Marshall to the women’s committee.

Sands, BAAA first vice president Foster Dorsett and secretary general Carl Oliver are en-route to Beijing, China where the IAAF will hold their 50th Congress, starting on Tuesday. Following the two-day meeting, the election of officers will take place heading into the 15th World Championships, scheduled for August 22-30.

“All member associations play a critical role in this congress because it is an election year and all seats are vacant from the presidency down to the council members as well as all of the committees,” said Sands, as the Bahamas joins the 214 members in the IAAF.

“Our delegates from the BAAA will continue to review all of the candidates and we will make our determination as to who we will cast our votes for.”

In a move several years ago by former BAAA president Dr Bernard Nottage, it was agreed, accepted and passed by the IAAF that there will be only “one vote, one nation,” which evens the playing field for those biggest countries like the United States, Canada, Australia and Germany to the smaller countries like the Caribbean nations.

Davis-Thompson, elected in 2007 as the second Bahamian to sit on the IAAF Council behind Alpheus ‘Hawk’ Finlayson, who got his historic position in 1999, will be vying for one of the six seats on the female individual members and one of the nine sets on the individual members that will make up the IAAF Council that includes the president, four vice presidents and the treasurer.

Former pole vaulter Sergey Bubka from the Ukraine and former middle distance runner Sebastian Coe are running for the top post as current IAAF president Lamine Diack will not be seeking re-election. Diack, a former long jumper from Dakar, Senegal, was first elected as president on November 8, 1999 and he was re-elected to his second term on October 16, 2011.

As for Marshall, he will be vying for one of five male spots or one of the eight as a member of the IAAF women’s committee, which will also be electing a chairperson out of five candidates.

“We will be supporting Pauline Davis-Thompson’s candidacy and we also have Dennis Marshall, who is running for the women’s committee,” Sands said. “The IAAF has mandate that their committees follow the same format where they have a 20 per cent of persons from the opposite sex. So hopefully they will be successful in their bids.

“If they do, this will allow the Bahamas to continue to play a major role in the sport in the Bahamas and also throughout the region. So it’s an honour and a humbling feeling that at the NACAC region, they expressed their confidence in electing me to the high position as the first vice president, so it allows us to be at the table to make our contribution to the sport.”

“This is a high level of competition and in some instances, it may even be bigger than the Olympic Games for some of the athletes,” Sands said. “As you know, they offer cash prizes to the athletes here, but they don’t do it at the Olympics. So it’s a very big incentive for those athletes who perform very well.”

Sands said the Bahamian athletes left from various points in the Bahamas and the United States to make the trek to Beijing.

“We’re looking forward to some good competition from our athletes,” Sands said. “We have a good mixture of some young athletes and some veteran athletes. This will be the first time for some of the younger athletes, but the senior athletes know what it is they have to do at this level.

“We expect the team to perform exceptionally well. You know me, I’m not one to count medals like everybody else, but I expect some very good performances. It’s never easy because we are at the World Championships and unfortunately, because we have been so successful at the world stage, the expectations at home is also high and if you don’t come back with a medal, they believe that we would have failed.”

Sands, however, said the public needs to be aware that this is a global event and everybody plans and prepares to compete at a high level at this event.

The team manager is Ralph McKinney, the technical director is Frank ‘Pancho’ Rahming and the press attache is Philippa Arnette-Willie. The official is Mabelene Miller.

The medical team is headed by Dr Keir Miller. The chiropractor is Dr Kelly Kemp and the physiotherapist is Khalid Hanna.