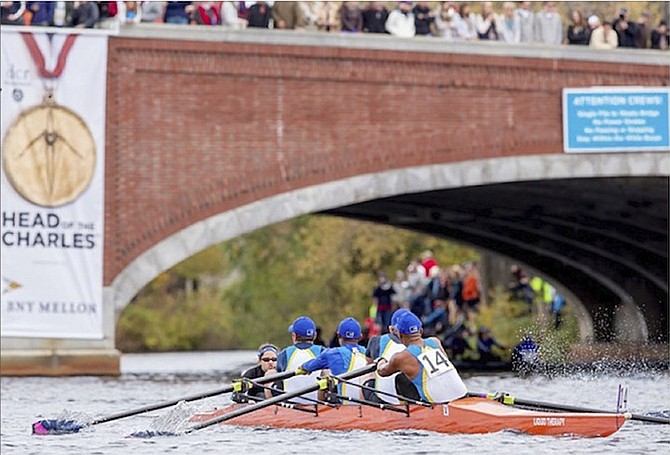 IT HAS been a landmark year thus far for the Nassau Rowing Club and the organisation recently celebrated its third anniversary as it continues its effort to increase the local profile of the sport.

Kyle Chea, president of the club, said the year was highlighted by the performance of the duo that competed at the World Junior Rowing Championships earlier this month in Rio de Janeiro, Brazil.

“Our two rowing dynamos faced tremendous competition and maintained their composure and poise to show the grandstand some fine rowing in the Junior Men’s Double Scull at the World Rowing Junior Championships. These young men have signed their page in history toward putting our club, and rowing in The Bahamas, on the map,” he said.

“Special thanks goes out to the Bahamas Olympic Committee for airfare support - we would not have gotten to Rio without them - and FISA’s Development Programme for assuming room and board costs. Vespoli stepped up to fill the all-important gap of providing a boat to row, allowing the crew to row a 2015 Vespoli High Performance shell, providing a welcome psychological boost.”

The two-man team of Lex Fountain and William Stanhope finished 18th overall at the event.

The NRC is a not-for-profit organisation and was established in August, 2012, by six rowing enthusiasts with the aim of developing the premier competitive rowing programme in the Bahamas for rowers of all experience, age, and fitness levels.

“Looking back from last August to today, we’ve covered quite a few proverbial metres. We have purchased four of our own ergs, and our own Boston Whaler. We’ve “moved house” down the lake, with plenty of space for our entire fleet, thanks to amazing community support. We made the Bahamas’ debut at the 50th Head of the Charles Regatta in the Men’s Championship 4+ Division in front of over 500,000 spectators. At this year’s ergathon, we raised over $4,700 for a floating dock and other club improvements we will carry out in the next year. Coach AC Chacon returned this year - for three weeks rather than last year’s two - to conduct the 3rd annual Learn to Row Camp, the third in our three years of existence. He also provided invaluable coaching to the junior national crew, as well as the men’s senior squad.”

As the first rowing club in the Bahamas, the NRC fielded the first competitive rowing entry from the Bahamas in the history of the sport - a junior varsity men’s double scull at the 40th Annual Miami International Regatta in April, 2013.

In 2014, the NRC entered a novice men’s coxed four, and a women’s double scull at the 41st Miami International Regatta and the Head of the Charles Regatta.

Chea said he looks for that growth to continue in 2015.

“We have three boats entered for this year’s Head of the Charles Regatta - a junior men’s double scull, a senior men’s club coxed four, and a veterans (60+) men’s single. This is up from last year’s lone boat, and proof that the Nassau RC is here to stay on the international regatta scene,” he said.

“We’re looking forward to redoubling our recruitment efforts among high schools locally to make an even more competitive crew for next year’s Junior World Championships, as well as growing our senior and masters squads. We’re looking out for more opportunities to race in regattas on the American East Coast, as well as for any other interesting opportunities in California, Canada, and elsewhere.”

“Special thanks goes out to the Bahamas Medical Center as our new indoor training home, helping us move training indoor at a moment’s notice. We also want to thank JL Racing for stepping up to help make our uniforms more affordable to enable us to look good at a great price. The Rotary Club of East Nassau has also been an amazing corporate community, giving us an audience and platform from which we can always find support,” Chea said.

“A very special thanks goes to Sir Durward Knowles, who has been the largest single benefactor - private or public - since the establishment of our club. We were honoured to temporarily christen our boat in the Rio regatta ‘The Spirit of Sir Durward,’ in honour of his belief in our club, our mission, and our future.

With current membership, funds available for equipment and growth limited, Chea said the NRC is still working out membership and other training fees.

“We have accomplished a great deal in three years through your support whether in person, in kind, or financially. The great rowing clubs of the world did not achieve their legendary status in a few years, nor did they maintain their status without the pride of their members. I wish to implore you to dig in for some good, hard strokes, swing together, and feel the run as we progress as a club,” he said. “Let us aim not only to be the best club in The Bahamas, but one of the best rowing programmes in the Caribbean.”