Brackets Are Released For 2015 Battle 4 Atlantis 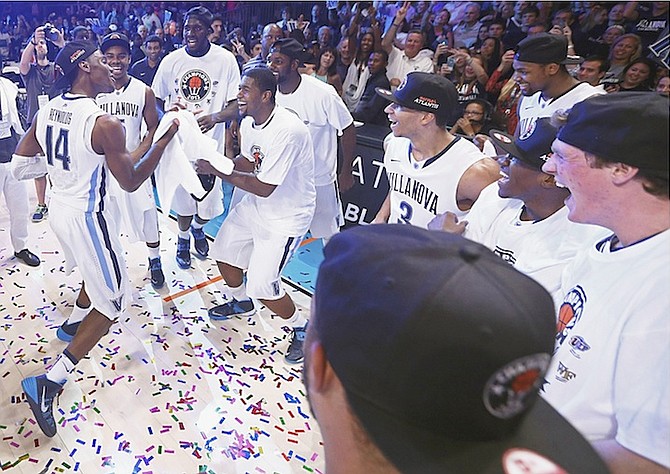 THE brackets have been released for the 2015 Battle 4 Atlantis, giving us insight to the first round matchups as teams prepare for the eagerly anticipated fall classic at the Atlantis resort on Paradise Island November 25-27.

The opening game will feature Gonzaga versus Washington, followed by Charlotte versus Syracuse, Wednesday November 25.

The third game of the tournament should be of particular note to the Bahamian public as it will feature a matchup of Bahamian players competing for their respective universities in the B4A.

Shaquille Cleare and the Texas Longhorns will face Tavario Miller and the Texas A and M Aggies while Michigan will take on UConn to close out day one.

The 2015 Battle 4 Atlantis will include a talented group, with not only two Bahamians, but some of the top incoming freshman classes in all of NCAA Division I basketball.

The Aggies will also field the No. 6 recruiting class in the nation, giving local and visiting college basketball enthusiasts a look at a lineup that features three of the top 35 countries in the nation, according to ESPN.com.

The Aggies will welcome a trio of front court players from Texas products, including high school teammates Tyler Davis (No.27) and DJ Hogg (No.35), along with post player Elijah Thomas.

Despite their recent controversies, Syracuse has still managed to sign the No.7 recruiting class in the nation for the upcoming season which includes four players in ESPN.com’s top 100.

Dynamic wing (No.23) Malachi Richardson will lead the class which also includes No.56 Moustapha Diagne, No. 74 Tyler London and No.92 Franklin Howard.

Washington boasts of the No.17 incoming freshman class with No.49 Dejounte Murray and No.58 Marquese Chriss.

The Longhorns will feature the aforementioned Cleare and the No.21 recruiting class for 2015 led by No.45 Ed Davis and No.47 Kerwin Roach.

This year marks the second consecutive year the Bahamian public will have an opportunity to watch local players in action at the Battle 4 Atlantis when the 2015 edition of the tournament tips off next Thanksgiving at the Atlantis resort on Paradise Island.

Buddy Hield of the Oklahoma Sooners and Wannah Bail of the UCLA Bruins became the first Bahamians to play in the tournament when they competed in 2014.

In 2016, it will mark the third consecutive year that a Bahamian will play at home in the B4A with point guard Lourawls “Tum Tum” Nairn Jr who enters his sophomore season with the Spartans.

According to Jeff Goodman of ESPN, the first  group of teams to confirm for next year’s tournament includes the Michigan State Spartans, the Louisville Cardinals, the Wichita State Shockers, St John’s Red Storm and Virginia Commonwealth University Rams.

The tournament is staged at the 3,900-seat Imperial Arena, a ballroom converted to a basketball venue. The event is  televised live on ESPN and AXS TV. ESPN2 airs opening round games while ESPN airs the semi-finals, third place and championship games.