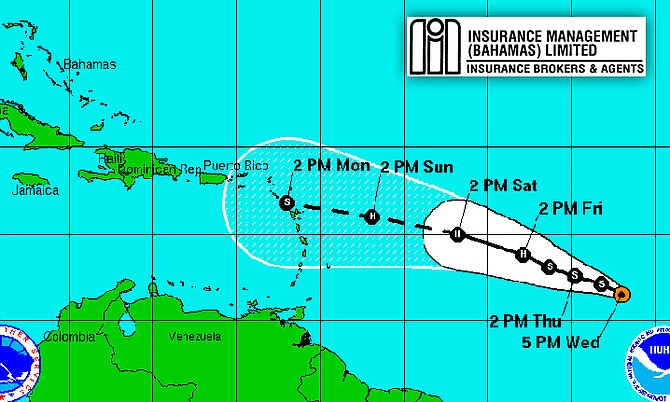 Danny was reported to be 900 miles south east of the Caribbean’s Leeward Islands and moving north-west at 10mph, gaining a little strength as it moved across the Atlantic.

The maximum wind speed had increased to near 115mph, and the NHC said that while some additional strengthening is possible, Danny should start weakening on Saturday.

Danny became a hurricane as of 11am on Thursday, developing sustained winds of 75mph, making it a category one hurricane. It had been a tropical storm since Tuesday. It is described as a tiny hurricane with hurricane force winds only extending outward up to 10 miles from its centre. The NHC cautioned that Danny’s small size makes forecasting its strength especially difficult.

The storm is expected to hit the Leeward Islands islands early on Monday and potentially strike Puerto Rico by Tuesday. By then it could be downgraded, either to a tropical storm or to a tropical wave.

The NHC said the storm currently poses no threat to land and no coastal watches or warnings are in effect, although those in the Leeward Islands should monitor its progress.

“The islands most likely affected will be the south eastern Bahamas, which includes Inagua, Mayaguana and Ragged Island,” Mr Armstrong said. “It is expected to be at tropical storm strength as it nears us, but it is too early to say how it will affect us.”

AccuWeather is forecasting eight tropical storms, four hurricanes and one major hurricane for the 2015 season.

Last week, The Tribune was told by international weather experts that if newly updated weather projections hold true, this year’s Atlantic hurricane season could be the least active since 1997.