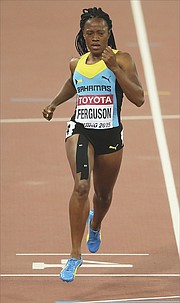 BEIJING, China — Sheniqua ‘Q’ Ferguson was hoping to make her return to the Bird’s Nest a spectacular one.

Instead, she will be leaving the national arena with Team Bahamas with some introspective on how she will need to turn her career around after making her first exit in both the women’s 100 and 200 metres at the 15th IAAF World Championships.

Ferguson, who got her Olympic Games’ debut at the Bird’s Nest in 2008, admitted that her return wasn’t what she expected as her sixth place finish in her heat of the 200m in 23.44 seconds kept her from advancing to the semi-final.

“It wasn’t what I expected, but I just thank God for my season. I had an injury free season, so that was a good start,” Ferguson said. “It’s probably my second season that I went injury free, so right now me and my coach Henry Rolle will prepare for Rio.”

Rio de Janeiro, Brazil, is the next major hurdle for Ferguson as she attempts to qualify for her third Olympic appearance in 2016.

“We just have to fix some stuff for next year, so I’m looking forward to it,” she said.

Considered one of the heirs to the void left by the ‘Golden Girls’ - Eldece Clarke, Chandra Sturrup, Pauline Davis-Thompson, Sevatheda Fynes and Debbie Ferguson-McKenzie - Ferguson has not come into her own as yet.

The 25-year-old sprinter was hoping to make it a double triumph at least into the semi-final, but she also bowed out in the first round of the 100m earlier in the championships, only running 11.48 for seventh in her heat and 34th overall.

“It was really disappointing. Disappointing. I would say this is my first time doubling up, running both the 100 and 200 for some years now. The last time I ran the two events was in 2008 right here in Beijing for my first Olympics,” Ferguson said.

“So it’s kind of hard for me right now seeing that I had the 100 and 200, but it’s something that I look forward to. I love competing, but I’m very disappointed that I didn’t get out of the rounds.”

Like everybody’s goal, which is to get into the final and attempt to get a medal, Ferguson said she will have to go back to the drawing board after an injury-free season to prepare for next year.

“I really don’t know. I can’t say if I will do the double, but if I do, me and my coach will have to sit down and decide our game plan,” she said. “Basically my training has been to run the rounds, so I’m in that kind of shape to run the rounds. We just have to tweak the little things, knowing when to compete, just the little simple stuff.”

As a result of her early exit, Ferguson’s job is done in Beijing because Team Bahamas won’t be represented in the women’s 4 x 100m relay.

It’s probably even more disappointing than not seeing Ferguson get through the rounds of either the 100 or the 200m.

The team didn’t qualify all season long and a season-ending injury to Anthonique Strachan at the Pan Am Games left any hopes of the team getting the job done in Toronto, Canada, at the last chance meet.