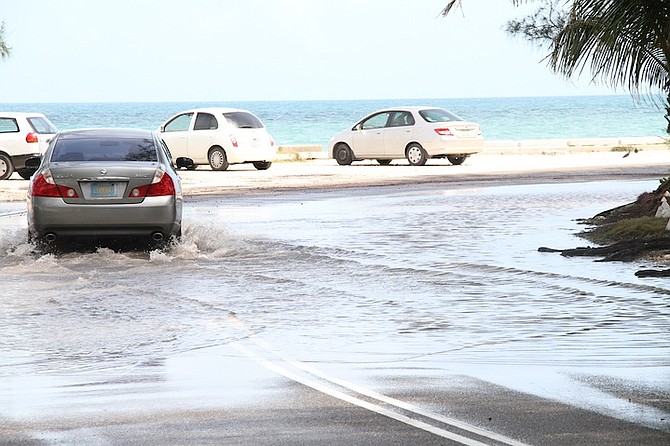 THE Bahamas was spared the wrath of Erika over the weekend, after the deadly storm made an unexpected turn to the west on Friday, taking the country’s chain of islands out of its destructive path.

Local meteorologist Greg Thompson said while it originally appeared that the system would track north of the Caribbean islands to the Bahamas and Florida, Erika maintained a more westward track taking it over Cuba and was shredded by the mountains of Hispaniola.

“When the storm interacted with the mountain range it fell apart,” Mr Thompson said. “The high ridge of pressure kept it on the westward track and relocated the centre of the system just north of Cuba. We had no reports of any flooding or damage and we had some rain in the southeast Bahamas. So the showers that were experienced in the Bahamas on Saturday and Sunday were the remnants of Erika. That was the only effect. The bulk of the weather is sitting across Florida.”

Tropical Storm Erika drenched Haiti and the Dominican Republic early on Saturday killing at least 20 people and leaving another 31 missing on the Caribbean island of Dominica, according to international reports. Dominica Prime Minister Roosevelt Skerrit said in a televised address late Friday that the damage inflicted by the storm set the island back 20 years. About 15 inches of rain fell on the mountainous island.

Erika is no longer a tropical storm, but could still bring heavy rains and flooding as it heads to Florida from the Caribbean, the US National Hurricane Centre said yesterday. Florida Governor Rick Scott urged residents to remain vigilant even though Erika has weakened.

Mr Thompson said the Meteorological Office is now keeping its eye on newly formed Tropical Storm Fred. However, it is too soon to say what impact, if any, the storm will have on the Bahamas.

“It is far too early but it is anticipated to become a hurricane in the next 24 hours. Right now it is off the coast of Africa but by the time it passes the Cape Verde Islands it should be back to a tropical storm, but it is also projected to regain strength,” he said. “But like I said, it is way too early to say what will happen with that.”

Tropical Storm Fred formed in the Atlantic Ocean early yesterday off the west coast of Africa. Fred was centred about 150 miles east-southeast of Praia in the Cape Verde Islands as of yesterday evening. It is expected to strengthen to Category 1 hurricane status as it moves northwest. A hurricane warning has been issued for the Cape Verde Islands.