Insight: Nottage On Crime – Too Little, Too Late 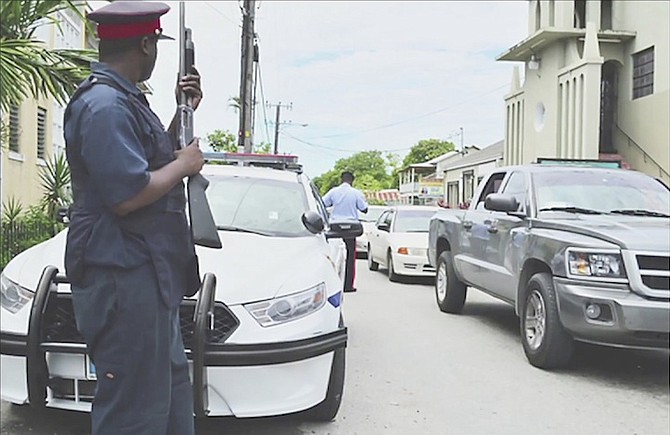 The hour-long pre-taped broadcast came on a day when many residents were preparing for the arrival of Tropical Storm Erika - which later proved to be less of a threat than the scores of thugs holding the country hostage with their criminal behaviour - and were likely tending to their home affairs and not glued to ZNS.

The national address was not pre-publicised, save for a scroll on ZNS before the 6pm news, telling viewers to tune in at 8pm for a speech from Dr Nottage on crime. Many have been waiting for months to hear fresh ideas or a realistic approach on the issue from the man tasked with heading the Ministry of National Security. Those who tuned in on Thursday night were sorely disappointed.

The address has been panned by some observers as ‘too little, too late’, being insensitive and devoid of anything of substance.

As one observer put it to Insight, Dr Nottage’s hour-long monologue proved to be more of a history lesson on the country’s crime problem than an innovative, ideas-driven speech that the nation is hungry for. That same observer wondered if Dr Nottage had just repackaged the speech meant for his contribution to the 2015/2016 budget debate - which he never gave - and presented it to the public last week.

On the same day the British and Canadian governments issued new crime warnings about the Bahamas, Dr Nottage stuck to his tired script of repeating that overall crime is trending down, despite anecdotal evidence to contrary.

He added somewhat begrudgingly “murders are the yardstick by which the public gauges the level of crime in our nation” as if it were foolish to be concerned about the high incidents of carnage on the streets of New Providence while officials insist crime rates are dropping.

He conceded the well-known fact that, as of last week, murders were up 25 per cent compared to the same period last year.

Peppered throughout the Bains and Grants Town MP’s speech was a ‘blame the victim mentality’. On the issue of murder and bail, Dr Nottage explained that had 15 of this year’s murder victims not been released ahead of their respective trials they would not have been killed. He went further on this train of thought, saying that last year there would have been less than 100 murder cases if 30 victims who were on bail for serious crimes had not been released.

He added: “Our research has revealed that such persons are often the victims of fatal retaliation. We have knowledge of a case where a suspect who was on remand at the Department of Correctional Services was about to be released after someone had stood his bail. However, he was suspicious and asked for the identity of the person who was standing bail for him. When the name was revealed to him, it was a person who was unknown to him, and he immediately asked that he not be released as he was concerned that the person may well have been securing his release in order to harm him!”

According to this logic, if we kept everyone accused of a crime locked up ahead of trial murders would drop dramatically. This illogical thinking does not take into account that many trials result in acquittals or mistrials, meaning the accused would end up free regardless and still likely to be a victim of a homicide if he or she is an intended target. Simply locking criminals up and ‘throwing away the key’ will do nothing in the long-term if the triggers for anti-social behaviour and criminal activity are not rooted out.

More of the same

He presented an overview of the failed strategies already in play by this administration.

He reiterated that the government is focused on discouraging youths against drugs, thus lowering the demand for the illegal products; sending minor drug convicts to treatment centres rather than prison and cracking down on the illegal gun trade, among other things.

One of the only new ideas in his 30-page speech is the planned introduction of a Parental Responsibility Bill which, if passed into law, would compel parents to “properly supervise their minor children and accept responsibility for their actions”. Not doing so would be a criminal offence, he said.

There was also some ‘tough talk’ from the minister, as he warned gangsters that the government would not bend to their will.

He rehashed the government’s 2014 amendment to the Penal Code, which made being a member of an illegal gang a criminal offence with a fine of $500,000 or 20 years in prison. However, no one has been convicted under this new law.

“I am therefore warning gang members that as this law takes effect, the consequences for you are very, very, very serious,” he said. “Several gang leaders are presently serving time in the Bahamas Department of Corrections, though not being convicted under this Act. We will continue to do our part to ensure that all gang members, who continue to disrupt the peace and tranquility of our nation, will face the full brunt of this new amendment.”

Dr Nottage also gave what was meant to be a stern admonishment to all the thugs running rampant in this county: “I warn criminals and members of criminal gangs that we will not rest until all of you are taken down and brought to justice. I warn members of the public to cease and desist from allowing their homes to be havens for criminals and their illicit activities.”

I guess the good doctor has not noticed that these threats have fallen on deaf ears for the past eight or so years, as the criminal element in the Bahamas continues to thrive and become more brazen.

In March 2012, on the heels of a record murder count in 2011, the then governing Free National Movement (FNM) enlisted the help of New York Police Commissioner William Bratton. The American top cop was called in to give advice to the Royal Bahamas Police Force (RBPF) and suggestions on crime fighting.

At the time, the opposition Progressive Liberal Party (PLP) called the visit a “media gimmick” ahead of the next general election.

In a press release, the PLP said: “Bratton represents the FNM’s latest last-minute, superficial attempt to persuade Bahamians that they care about crime.”

At the time, then-Minister of National Security Tommy Turnquest said the visit was not political, and that great ideas and solutions came from the discussions.

Fast forward to 2015 and the PLP is singing a different tune. Last week, Minister of Foreign Affairs and Immigration Fred Mitchell was parading Atlanta Mayor Kasim Reed, with two officials from his office, throughout the country on a series of meet and greets.

Chief among these courtesy calls was a stop at Police Headquarters, where Mr Reed shared his experience on fighting crime and held high-level meetings with the top brass of the RBPF.

According to reports, Mayor Reed has been able to lower crime in Atlanta significantly, including a 20 per cent reduction in youth crimes, by adopting several new measures.

His advice should be heeded and new ideas embraced.

There is nothing wrong with bringing in outside help on crime, and it is evident that the country needs all the assistance it can get, but the hypocrisy of the move cannot be overlooked.

It is evident that this government is bankrupt of new ideas and is embarrassed to admit that it is in the same position that crippled the Ingraham administration from 2007 to 2012. While our leaders sit on their hands, more of our countrymen will die on the streets, leaving children without mothers or fathers, caught in a vicious cycle that is doomed to repeat itself.

What do you think? Email comments to tmthompson@tribunemedia.net

nothing new from this out of touch Minister...just like all the rest of them! get out old man...get someone else in there that is in touch with police methods that aren't 50 years behind....