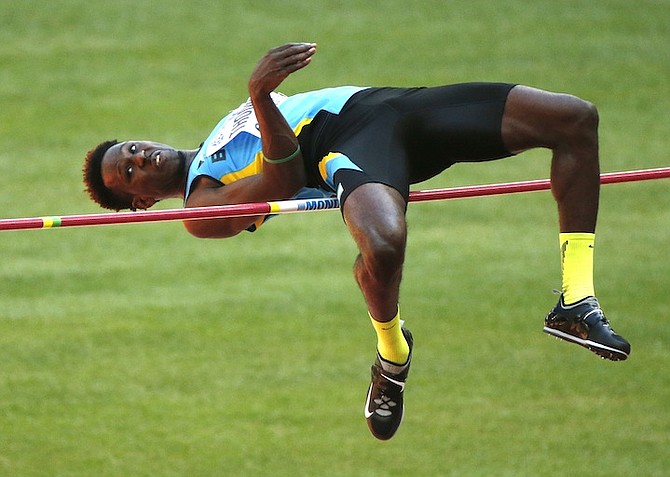 BEIJING, China — With no team represented in the grand finale in the men’s 4 x 400 metre relay, Team Bahamas closed out competition at the 15th IAAF World Championships with the men’s high jump final at the Bird’s Nest Stadium last night.

With two of the three men qualified, Donald Thomas soared to a sixth place for the second consecutive championships at 2.29 metres or 7-feet, 6-inches and Barry, back in the championships since he won the bronze medal in 2011 in Daegu, ended up 10th with 2.25m (7-4 1/2).

The unpredictable showdown concluded with a jump off between the three medallists after they finished in a three-way tie at 2.33m (7-7 3/4).

Derek Drouin, the Olympic champion and bronze medallist from the 2013 championships, won the gold with 2.34m (7-8) and defending champion Bohdan Bondarenko of the Ukraine and China’s colourful Guowel Zhang got the silver and bronze respectively at 2.33m (7-7 3/4)..

At the third height of 2.29m (7-6), Thomas got his first knockdown and Barry, who followed with another. However, Thomas cleared the second attempt but Barry missed his second and on his third, his right leg hit the bar as he got eliminated with five others.

While Thomas remained with a clean slate at the second height of 2.25m (7-4 1/2), Barry moved into the ninth spot when he cleared the mark on his first attempt. The first competitor to be eliminated was Konstadinos Baniotis of Greece at the height.

Again, Thomas had no problems going over the opening height of 2.20m (7-2 1/2). Barry had to go to his third and final attempt to avoid an early elimination. Only Barry and Baniotis had difficulties clearing the opening height. Baniotis cleared it on his second attempt to sit in 13th place with Barry at the bottom in 14th.

Ryan Ingraham, the other member of the jumping trio for Team Bahamas, didn’t advance out of the qualifying round on Saturday. Competing with a slight injury he sustained at the Pan American Games where he got a bronze, he bowed out with a best of 2.26m for a two-way tie for 25th place.

The Bahamas got eliminated from the final of the men’s 1,600m relay for the third consecutive championship. This time, on Saturday, Michael Mathieu had a lane violation on the second leg as the team of Steven Gardiner, Alonzo Russell and Ramon Miller didn’t move.

The Bahamas finished tied with Trinidad & Tobago and Ukraine for the 20th spot in the medal table with the one silver from Shaunae Miller in the women’s 400m and the bronze from Jeffery Gibson in the men’s 400m hurdles.

And in the placing table, the Bahamas was 19th overall with a second, third and sixth place for 16 points. The USA, however, turned the tables by winning with 214 points, compared to Kenya’s 173 for second and Jamaica with 132 for third.

The focus now switches to London, England, for the 16th IAAF World Championships August 5-13. Next year, however, the athletes will compete in the IAAF World Indoor Championships in Portland, Oregon, March 17-20 and the Olympic Games in Rio de Janeiro, Brazil, August 5-21.