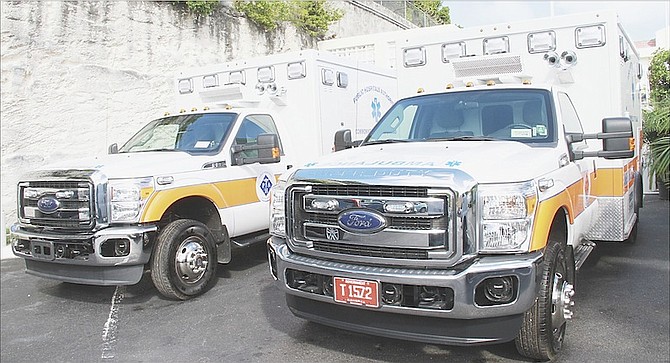 THE National Insurance Board yesterday turned over two new “state of the art” ambulances to the Public Hospitals Authority to improve its capacity to respond to medical emergencies.

According to Dr Gomez, the two ambulances bought by NIB will be added to the fleet of an additional 25 ambulances to be purchased by the PHA. Those vehicles, he said, will allow for the retirement of “aging vehicles” from the PHA’s existing fleet, and also allow for the implementation of the “decentralized ambulance service” to the public clinics in Flamingo Gardens, South Beach, Elizabeth Estates and Eight Mile Rock in Grand Bahama.

Dr Gomez said once stationed in those areas and fully equipped with the necessary trained emergency technicians, emergency response times are expected to drop from an average of 28 minutes to eight minutes.

Mrs Bethel, meanwhile, said NIB was proud to assist in something that would further bolster the country’s healthcare system ahead of the implementation of the government’s proposed National Health Insurance (NHI) scheme.

“As the government moves to implement universal healthcare coverage, adequate tools such as these ambulances, are an imperative to support this worthwhile programme,” she said. “I am sure that the Bahamian public now has at their disposal two state of the art vehicles that NIB is privileged to assist in contributing towards, and we also look forward to the partnership (with the Ministry of Health).”

According to Dr Gomez, the new ambulances are equipped with automatic transmissions and are customised with features that will improve “performance, reliability, patient and staff safety as well as improved visibility and audibility.”

The vehicles are also equipped with global positioning systems (GPS), high sulphur grade diesel engines, LED lighting, hydraulic lifts to allow the cabin to be raised and lowered, and a modular cabin “for ease through the narrow streets of New Providence”.

According to Dr Gomez, the PHA will seek to deploy ambulances to north Andros, Bimini and San Salvador in the coming year.

Comrades make sure assign pictures of the known be aggressively advocates for keeping the status quo insurance industry in place, Why blow taxpayers monies on new ambulances be rushing those that oppose Universal Health Care to da emergency department at government hospital. Make them take taxis or walk or whatever means they have get's them there.

There is no way in Hellll that 2014 trucks in late 2015 cost 150000. they mussey stealing. Plus nassau is so small the govt could be saving up to 80% off if they buy them two to three years old, like the ones they just both.

Should have kept these in the package till round grad time, then the students coulda gone to grad in a new brand ambulance........

Not to worry these ambulance will be destroyed through abuse and neglect shortly, they are government issue so no one will take care of them, FACT!

ok, so they do not maintain the prison bus, or the ambulances.

wasn't there a fellow who cut his losses and walked to pmh, after the ambulance flipped over on shirley st.?

hahaha, boy the expectation is very low for civil service.

Money well spent for a change.. Compared to millions of dollars to buy navy ships and airplanes for the RBDF to defend against who and what? 2 boats patrolling south of Inagua 24/7 could do everything you need to stop Haitian boats and turn them back.. A nation of 350,000 needs to be realistic with expectations and not hang the hat higher than we can reach..