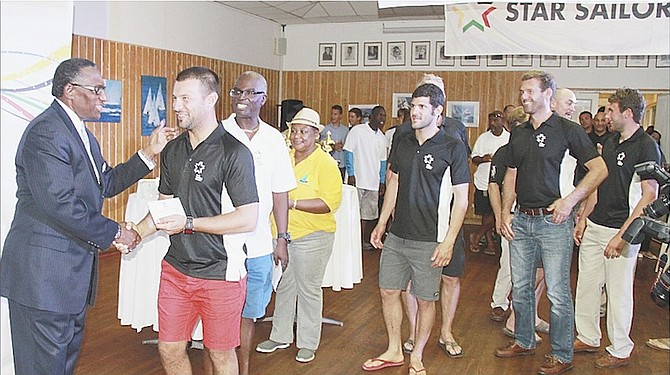 THE All Mayaguana Regatta Committee got a major boost to its fund-raising efforts with the Sail Sailors League joining in a big promotion of the sloop sailing boats in Montagu Bay on Monday.

Here for the SS Finals this week, the international sailors mixed and mingled with the local C Class sailors in the three-race regatta. Winning the title was the Crazy Partner, followed by Fugitive, the Bahama Breeze Thunderbird, the Sweet Island Gal, Flash and Lady Margaret. Each boat had at least three international sailors on board.

“At first, I thought the series would have turned out bad for us, but it was a very good one,” said Warren Adderley, who spoke on behalf of Crazy Partner owner Gerrard Moxey. “When we started at first, we had one or two problems with the sail going up on the track. But it all ironed out and we were the victors. It was a lot of fun, but we did it all in the name of sports.”

Adderley, who sailed along with David Rolle, a sailor from Scotland and two Americans, said they matched their skills very well and was able to turn things around after their dismal start.

Although the Flash came in fifth with two Frenchmen and Polish sailor, Dwayne Higgins said they enjoyed the series.

“The All Mayaguana Regatta Committee is appreciative of the boats that came out,” Higgins said. “It was an extension of what we started on Saturday and Sunday and the fact that these international sailors gave us a priceless experience. I know the ones who sailed with us really enjoyed themselves. We really hope that more of the local sailors could have gained from the experience.”

Race organiser Rev Dr Philip McPhee said the whole experience was probably the greatest thing that has ever happened for sloop sailing.

“The opportunity to showcase our boats under the management of world class and Olympic sailors was tremendous. They adapted so well to our style of sailing,” he said. “It was astonishing to see how gifted these guys are and how well our boats can sail under professionals, who handled our boats so very well.”

McPhee publicly thanked the SSL and its founder and organiser Michel Niklaus and Serena Williams of Serena Williams Media & Public Relations for giving the local sailors the opportunity to use their fundraiser as a means to display the sloop sailing competition to the world.

“I really want to thank the boat owners. We had to work up until midnight to actually make this happen,” he said. “It was not an easy task to do, but I want to thank the boats that participated and Dwayne Higgins for his support also. He worked hand-in-hand with me to make this possible. And I want to thank my Minister, V Alfred Gray and the Permanent Secretary at the Ministry of Agriculture & Marine Resources, Rena Glinton, for the role they also played along with the entire staff.”

Today, the SSL Finals are set to begin at 11am with the first qualifying round. The rounds will continue until Friday when the top 11 teams will advance to the final to be staged on Saturday.

And there is also a rookie in GBR Lorenzo Brando Chiavarini (Laser - Winner of Qingdao World Cup).