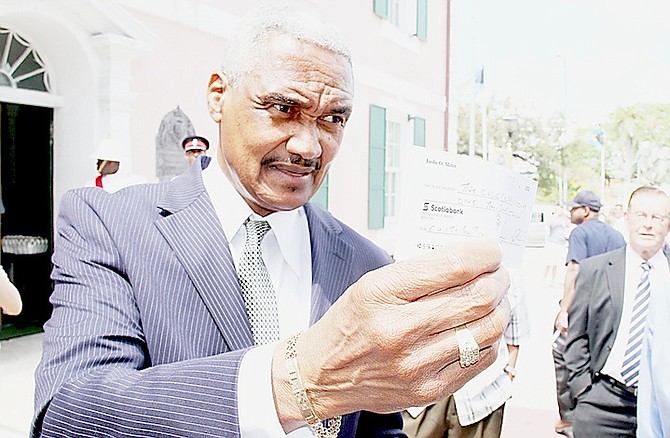 LESLIE Miller pictured last year showing the cheque for $1,000 he said he was giving to the Bahamas Crisis Centre after he had said in the House of Assembly that he had physically abused an ex-girlfriend, something he later said was a joke. The centre declined the offer of a cheque from Mr Miller.

THE Bahamas Crisis Centre yesterday demanded that Tall Pines MP Leslie Miller apologise and retract his “vile,” “offensive” and “malicious “ attack on the non-profit organisation a day after he said it was filled “with phonies, fakes and frauds”.

Deputy Director of the Crisis Centre Donna Nicolls was nearly moved to tears as she defended the organisation’s volunteers from Mr Miller’s “uninformed and vindictive” comments.

She invited the Progressive Liberal Party MP to participate in the organisation’s volunteer training next month to bring himself up to speed on the work of the Crisis Centre and to assist it in helping vulnerable people.

Social Services Minister Melanie Griffin, yesterday in a press statement, threw her support behind the Crisis Centre saying its work was invaluable. She commended its director, staff and many volunteers for their commitment and service to this country.

She also said she was “dismayed” with Mr Miller’s comments about the centre, which was established in 1982 and has over the years demonstrated its commitment to enhancing the quality of life of women, children and families.

The Crisis Centre, she said, is perhaps most well known for its advocacy and support on behalf of victims of violence, as well as for legislation on their behalf.

According to Ms Nicholls, the centre sees at least 600 people each year and at its peak this number can reach up to 1,200. Clients include victims of rape, incest, domestic violence and human trafficking.

On Monday, Mr Miller expressed outrage as he claimed that the group was “nowhere to be found” and remained silent after the murder of elementary school teacher Joyelle McIntosh last month. He insisted that there were no representatives from the support group at the 40-year-old’s funeral last week.

However, Mrs Nicolls said, several Crisis Centre volunteers attended the funeral, adding that the centre’s work is far-reaching and multifaceted.

“I would just like to add personally why this is so offensive to me,” she said as she held back tears. “I have a full time job but I spend more time doing my volunteer work at the Crisis Centre than I do at my full time job.

“There are just so many things that we do. So the words ‘phonies, fakes and frauds’ it goes straight to my heart because I have given (just) as Dr (Sandra Dean) Patterson and all the volunteers, we have given so freely and willingly and lovingly to the community. It is really an insult.”

She continued: “It saddens us to realise just how uninformed and vindictive Mr Miller could be given that he is a national leader with the ability to influence the hearts and minds of people who so badly need our support. On behalf of the thousands of people we help each year for the past 33 years we are compelled to respond to this hurtful and vicious attack because if it results in just one person deciding not to call our 24-hour hotline, one person not to walk through our doors to speak to a counsellor during our free clinics, one person to feel they have nowhere to turn, it would have been one too many.”

“We demand a retraction of his statement and also invite him to participate in our volunteer training in January so he can be more informed and he can help us to do what we do. And we remind all the people in the Bahamas, especially vulnerable groups that we are always here for you.”

This is not the first time that the MP has clashed with the Bahamas Crisis Centre.

Early last year, Mr Miller butted heads with representatives of the centre when they refused to accept his donation of $1,000. Mr Miller tried to make the donation in an effort to calm backlash over an earlier statement he had made in the House of Assembly when he said he physically abused an ex-girlfriend in the past.

In the face of criticism, Mr Miller walked back from the comments and said the remarks were a joke.

Asked about this, Mrs Nicolls said she did not think his actions were genuine then and does not think they are now.

One would think that Mr. Miller would as a national leader, exercise a more disciplined approach when voicing his opinions publicly lest he offend the very people who voted for him. But the arrogant prideful person that he is ....that's just not possible. Foot in mouth syndrome seems to be the order of the day with our governing officials. I wonder what he will say to the Crisis Centre when he back pedals on his words a second time. Disingenuous, undisciplined fool. Shame on you Mr. Miller!

Members of the Crisis Center need not engage Leslie Miller with a rebuttal.

This man talks completely out of his hip-hole all in an effort to remain relevant. His criticism is the direct result of a pre-existing personal vendetta he hold against the Crisis Center because they publicly rebuked him for the senseless and despicable comments he made in the HOA regarding domestic abuse. What they need to understand is that "senseless" and "despicable" is what Leslie Miller and the PLP do best.

What the Crisis Center should have reported was that they are refusing to dignify any comments, made by Leslie Miller, with a response.

I remember my grandfather always used to tell me that if I argued with a fool, people walking by would only see two fools arguing.

Every time this potcake opens his maw he vomits forth such ridiculous nonsense! Why on earth are the news agencies even bothering to entertain his foolishness?