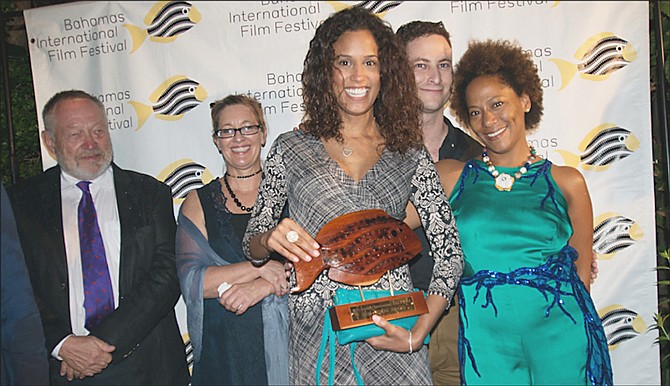 Leslie Vanderpool, right, at the award ceremony for the Bahamas International Film Festival

GOING into the 12th annual Bahamas International Film Festival (BIFF) two weeks ago, founder and executive director Leslie Vanderpool emphasised the value of developing the festival while simultaneously improving the country’s local film industry, promising that this year’s selection of films would showcase the industry’s best in The Bahamas.

If her words were not valued from the outset, the likes of award-winning casting director, Lynn Kressel; writer, actress, director, Daniela Amavia; renowned music supervisor Jonathan McHugh; celebrated screenwriter, Amy Berg and Academy Award winner, Anders Thomas Jensen added credence to her claim. Over the course of the festival’s 12 days, the BIFF has brought “Hollywood to the Bahamas”.

In an interview with The Tribune last week Jonathan McHugh, assistant producer on the festival’s closing film ‘Janis: Little Girl Blue’ which has its Bahamian premiere on Saturday night, suggested the movement from a “doors are wide open” festival to one focused on landing films dedicated to the “art of cinematography” format has influenced the calibre of the audience.

According to Mr McHugh, whose film career boasts musical credits in more than 75 motion pictures, films such as “Janis” are drawn to festivals such as the BIFF because it provides the best avenue to the “seismic response from film purists here for true films, films we want to make”.

“Janis” focuses on the life and tribulations of American singer-songwriter Janis Joplin, who was famous for her psychedelic, acid rock sound. In 1970, she died of a heroin overdose at 27.

The story of Joplin had been shopped around for decades, with scores of film writers and directors declaring interest but none moving beyond the developmental phase.

Mr McHugh pointed to the nature of the story as the main reason for the countless delays, insisting that it took the “right mix of producers” five to six years to jumpstart the production.

“It took persons that understood the story, persons that respected the art of filmography, a group that valued her music and talents; that is what got it here,” he said. “Once the ball started rolling and we completed it, we knew that it would have to be delivered in an authentic way to an audience that would appreciate it, an audience that would appreciate the art and the production value in this film.

“We did our first screening here in the Bahamas, over in Eleuthera at The Cove; it started raining nearing the end and no one moved,” he said. “That is when I knew that we made the right choice coming here. No one left because they were so invested in the story and film.”

The film opened in select theatres on November 27, grossing to date more than $100,000.

Artistic films similar to “Janis” littered this year’s festival. From short films to full length features, all the way up to stop-motion animation pieces. The BIFF attracted and promoted films that made a point to tell not just a story, but weave in overtones of creativity and uniqueness.

Those terms ironically best describe the career of Daniela Amavia, the genius behind the cinematic thriller “A Beautiful Now”; a film already awarded top prizes in the Barcelona International Film Festival and the Los Angeles Film Festival. Now it is taking aim at a Caribbean audience for the first time.

Bringing to life the final thoughts and moments of a detached, unsatisfied, aging dancer hours before her suicide, the directorial debut of Ms Amavia has captivated most that have seen it.

Lynn Kressel, assistant producer on the film, praised not only the development of the project but the growth of those responsible for it.

“(Amavia) read an article of a young woman who died tragically, and in that article it was mentioned that the medical examiner noted that the young woman didn’t die suddenly. Daniela, in her wonderful way of thinking, tried to imagine some of the thoughts that would have crossed the mind of an average person in that predicament; that is how we came up with this film,” Ms Kressel said.

“That small idea got me hooked. It was her storytelling, her confidence in what she was ultimately trying to make. That is what we all focused on.”

Ms Kressel’s explanation of why she came to The Bahamas with the film echoed comments from other directors and producers over the course of the festival: the growth of the BIFF mirrored the journey of film itself.

The “art form” is what Bruno Millo’s “Terra Incognita”; Maria Hengge’s drug abuse tale “Sin+Illy: Still Alive‘’; Charlie Griak’s “The Centre” and Conner Griffth’s “Ripple” all hoped to deliver. More than 500 films were submitted to the BIFF this year.

When it was launched in 2004 as a non-profit organisation dedicated to creating a cine-literate art community, hardly anyone involved predicted that by 2015 the festival would have a chance to brand itself as an important stop on the international film festival circuit.

The festival has showcased over 800 films from countries around the world and if the response by those involved with this year’s event is any indication, the BIFF is here to stay, if not for the scenery, certainly for the art.