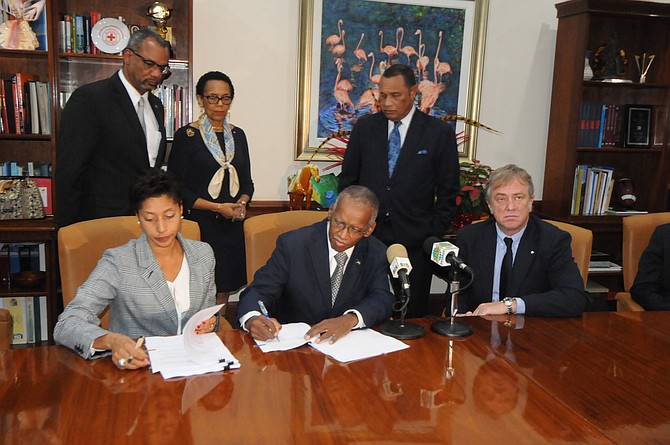 THE Mediterranean Shipping Company yesterday committed to the construction of a $100m private island cruise port, set to get underway at Sandy Cay in early 2016.

The development is expected to create 600 construction jobs and employ more than 300 permanent employees.

Prime Minister Perry Christie, along with MSC Cruises Executive Chairman Pierfrancesco Vago, signed a heads of agreement on Wednesday, with both sides hailing the moment as a major economic thrust for the northern Bahamas.

According to Mr Christie, the agreement paves the way for the construction of the “self-sustaining operation and environmental management” of a cruise port, the likes of which the country has never seen.

The development’s plans also call for a marine reserve at Sandy Cay, offering a unique diving experience for guests.

Mr Christie noted that historically, MSC’s cruise activities in the Bahamas have in recent years generated around $17m of direct expenditure.

MSC is considered the world’s second largest global shipping company. In addition to its shipping properties around the world, MSC has also generated one of the largest and fastest growing cruise lines.

Since it’s inception in 2012, MSC has grown 800 per cent while encompassing a fleet of twelve cruise ships carrying 1.7 million passengers to 45 countries globally.

“It is anticipated that economic activity from the cruise port at Sandy Cay will bring an additional 465,000 annual cruise passengers to The Bahamas,” Mr Christie said.

“This is expected to generate $20m in salaries for construction services and create over 600 new construction jobs, with 250 as full-time construction employees, over a two-year period.”

The Sandy Cay project, once completed in early 2018, is expected to staff 361 employees on a permanent basis, generating roughly $13m in recurrent salaries and taxes in the Bahamas.

Prior to Wednesday’s agreement MSC officials were locked in a stalemate with the Sandy Cay Development Company over the lease of the cay.

Sandy Cay Development Company held a 25-year lease on the island, on which the company mined sand and aragonite.

According to Mr Christie, Wednesday’s agreement between the government of the Bahamas and MSC came subsequent to a deal between MSC and proprietors of the Sandy Cay Development Company.

Meanwhile, both Mr Christie and MSC officials dispelled concerns related to Sandy Cay’s environmental integrity, insisting that studies have indicated that the island, despite years of sand and aragonite mining, is still capable of sustaining the intended range of construction.

Tony Myers, director of the Sandy Cay Development Company, told Tribune Business earlier this week that there was “a tremendous amount of work” that needed to be done before MSC’s vision became a reality, given that the cruise port amounted to a radical change in the island’s usage.

MSC is also a partner of another conglomerate and major Freeport investor, the Hutchison Group of Companies.

Hutchison Port Holdings, in association with the Port Group, owns and operates the Freeport Harbour and Container Terminal.

MSC recently committed itself to the $250m, phase five development at the port.

Thank God the island is leased and not sold. The PLP government is never commended ,for anything they do. The FNM Government during their last five years never brought one single investment to the Bahamas.

den how PLP is always love to blame Bahamar on Papa?

I think it is an interesting project. And still it is a project. like the 2000 others for which this Government has signed agreements for.

must be nice to sign on Dec 17 and start construction in early 2016. I bet the environmental studies etc. are made.

Gov't green policy is that if the money is green.... it's a green light

green lights usally don't work in Bahamas (and neither do orange or red lights) - but we have them. we are a first world country

its a perfect way to a company like MSC to channel some money to. overpay, write it off. We call it "land banking" in the industry. But it saves them a lot of money in gas, as they can squeeze in an extra stop between Fl. Lauderdale/Miami and Nassau.

New citizen you will have to get use to the fact that we live in a democracy and I have as much right to express my opinion as you do, We do not have to agree with each other. but it is a good idea to respect each other.

Last time i saw Sarkis expressing is opinion he was considered an undesired person that needs to have his residency removed. So please, dont talk about democracy...

A Bahamian and his Bahamian company currently has a twenty five year lease on the Ocean (Sandy) Cay property. It appears that this shipping company has not approached him and that deals are made that are ostensibly illegal by over riding or not recognising this currently existing lease.

Nice, when it is 97% done remember to stop working so theyll go bankrupt and you can gift it to the chinese.

Seems to me that MSC is looking ahead to when they go to Cuba. Their only Bahamas stop won't even touch any real islands or their economies.

Ocean Cay and then Cuba here we come! Nassau, Freeport? What Nassau, What Freeport?