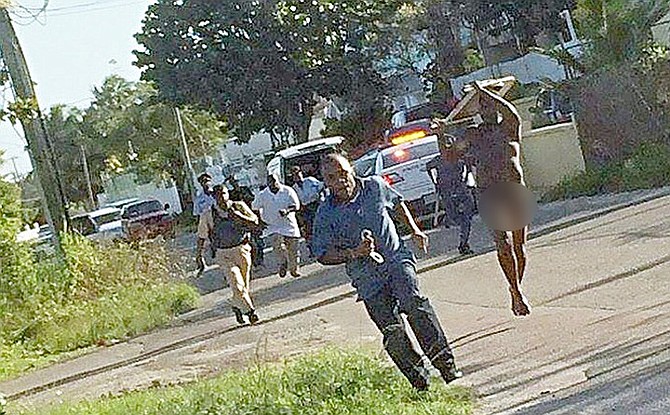 A picture circulating on social media reportedly showing police during a chase with a naked man.

POLICE were forced to shoot a naked man yesterday after receiving reports that he was harassing people near Saunders Beach, according to Assistant Police Commissioner Stephen Dean.

ACP Dean said the man was shot in the leg after he led police on a chase in the area of Perpall Tract, off West Bay Street.

Eyewitnesses said the man was completely naked and behaving belligerently.

Officers said that the man refused to co-operate, and smashed the front windshield of the police vehicle with a metal object. Police said the man then charged at one of the officers with the metal object and was shot.

Police believe the man may be struggling with a mental disorder and said his injury was not life threatening.

The suspect was detained in stable condition in hospital last night.

Did his mental disorder start anytime around that murder the other day? Just asking...

absolutely disgusted that the tribune would print this picture. if you feel the need to show the naked man, at least have some respect for him and your readers and blur out his private areas. this man is struggling with a mental disorder and you shame him so publicly? have you no respect? why would any editor allow this? you are certainly becoming tabloid in your approach to news coverage these days. very sad.

I witnessed this sad affair and it left me depressed all night. It was clear even driving by that this individual was not in their right mind and was acting irrationally. The police made an attempt with vehicles driving at high speeds next to this poor man to try and stop him. We need tazers issued as standard to all policemen or even pepper spray. There has to be some intermediate option short of shooting someone who is mentally deranged. We all would have been better served if this gentleman did not have to be shot, and access to the west restricted unnessarily, and it was clear that the police could have handled this if properly equipped and trained in a much more professional manner.

I agree with the posters.. I wish they had a teaser gun in their possession to use for this gentleman. But thank God for life and that he's able to live to see another day. Please take his picture down, that's not really called for! Mental illness can strike at anytime and happen to anyone of us. :(

Glad to see the editor finally blurred out the man's private parts!

Two comments: 1. Correct, the naked person is a man. Good journalistic work. 2. The Bahamian Police shoots naked, unarmed, crazy people. Any idea how we can undress our MPs?

I suppose that if the public is shooting one another, the police feel free to do the same.! Isn't it sad that they SHOOT a mentally deranged man to subdue him? It is truly like the wild, wild West in New Providence. Scary..

I could be wrong, but this whole incident seems off

"Suicide by cop can happen in several ways. The most common way through criminal intervention. This occurs when someone commits a major crime, then decides that they would rather die than get caught when confronted by officers."

First of all "tazing" a person with mental disorders can be very dangerous to that individual. It can make him more violent and more aggressive in his attack on individuals. The police need to have certain officers and/or a medical team trained on how to suppress and tranuualize then restrain these patients. Secondly families who have members who are mental patients should ensure that these persons are taking their medication and taking it on time. Christmas is a very stressful time of the year and the changes in the weather tend to trigger these individuals. They can go from calm to violent in a split second and attack without warning. Another person with a mental disorder was recently found in someone's house, sleeping in their bed with the shower water flooding the house. Unfortunately, too, the population of persons with mental disorders is increasing. This is due to substance abuse, the inability to cope with day to day life situations and even physical injuries. Some are even victims of hurricane Joquin.