Rufa ‘Continues To Be Target For Immigration Officers’ 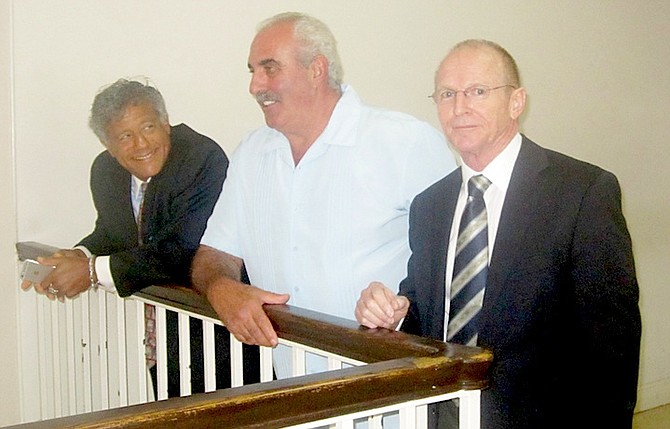 A WEEK after the Supreme Court ruled that he had been unlawfully deported from the Bahamas, Canadian Bruno Rufa believes he is still being harassed by immigration officials, according to the Grand Bahama Human Rights Association (GBHRA).

“Despite his recent vindication in the courts,” the group said in a statement yesterday, “Rufa has continued to be unlawfully targeted and persecuted, officers once again descending on his home this week to question the Canadian citizen and demand that he produce his travel documents.”

Supreme Court Justice Petra Hanna Weekes ruled recently that immigration authorities “breached the rules of natural justice” when they arrest people without reasonable suspicion and take them into custody without informing them of the reason for their arrest nor allowing them the chance to refute allegations, as she said happened in Mr Rufa’s case.

In response to this, Foreign Affairs and Immigration Minister Fred Mitchell said last week that the judge’s pronouncements amounted to a “challenge of the authority of immigration”.

GBHRA President Fred Smith, QC, said yesterday: “The Immigration Department must back off immediately. They have no right to target this man, whom the courts have declared innocent of the bogus charges that were brought against him in an effort to terrorise and hound him out of the country.”

The GBHRA said that around 10am on Monday three officers allegedly arrived at Mr Rufa’s front door, demanding that he present his passport to them.

“They suggested that, like a criminal out on bail, he must continually appear at (the Department of) Immigration’s offices to seek extensions allowing him to remain in the country. This when they know full well that he has been granted 150 days from November 23, in accordance with the wishes of the Supreme Court of the Bahamas,” Mr Smith said.

The experience was one example of the “bully tactics” that immigration officials have been using to make the Canadian fearful over the years, he continued, adding that Mr Mitchell has taken a public stance on immigrants that encourages such behaviour.

“Bruno and his partner are now living in fear,” Mr Smith said. “They believe officers are just looking for a reason to arrest and detain them on more trumped up charges. It is an awful thing to have to spend the holiday season looking over your shoulder all the time. I think it is safe to say that their Christmas is now ruined.

“Responding to the recent ruling upholding Bruno’s rights and declaring that (the Department of) Immigration does not have the power to simply detain and deport people arbitrarily, Mr Mitchell claimed the granting of natural justice in immigration cases, as enshrined in the Constitution, would cripple the country’s immigration laws as currently applied.

“Instead of recommending that his department’s practices be brought into line with the Constitution and judicial precedent, he actually had the audacity to suggest the law could be changed to give officers even more arbitrary power. It was a slap in the court’s face.

“Mr Mitchell’s casual disregard for people’s fundamental human rights and the authority of the courts is becoming quite frightening. His claim that this ruling and others like it are case-specific, and do not apply generally, is totally unbelievable - particularly coming from a trained lawyer.

“He should - and we are we are convinced, does - know better. If his personal fondness for dictatorial power prevents the minister from keeping his officers within the bounds of the law, we call on the Prime Minister to intervene before this half-baked recklessness causes any further damage to our international reputation.”

Mr Rufa, a condominium owner at the Coral Beach Hotel in Grand Bahama, was initially arrested on January 3 by immigration officers. He was later charged with illegally engaging in gainful occupation.

Didn't Justce Petra Hanna Weekes and Fred Smith QC used to work together?? Why is no one raising a conflict of interest with this judge?

Unless you bring in foreign judges there will always be an appearance of conflict. Just about everyone has, at sometime worked with someone else or is related to them.

So if you are one of these "must be Bahamian" people, you have what you wanted so don't complain.

The thing is the courts aren't saying the immigration laws are wrong. They are saying that the immigration dept is not adhering to its own laws, and in this respect they are the biggest enemy of themselves.

No one is saying don't deport people who are here unlawfully, only don't go about deporting those persons in an unlawful manner, because if you do that, like with Rufa, and with that Haitian man shot in the neck, the person you're trying to deport will get off the hook.

Then when ya turn around and start criticizing the courts for TRYING TO UPHOLD THE LAW...... you're not winning support, even if your cause if just, you're losing support by effing around.

Bruno Rufa may not be the best poster boy to champion the human rights cause. There is an oppression of the minority lawsuit filed against the Condominium Association led by Bruno Rufa as President. There was an alleged death threat complaint filed against Bruno Rufa at the Lucaya Police Station in Freeport Bahamas back in 2006. There was another complaint filed at the Police station in 2008 against Bruno Rufa for allegedly attempting - breaking and entering.There was another incident where a bound over the peace case was filed against Bruno Rufa,in the Freeport Magistrate court,where he got away with just a warning from the Judge. He was arrested by Immigration back in 2007 for allegedly working illegally and escorted out of the country for breaching the Immigration Act. He was arrested again by Immigration officers and charged in the Magistrate Court in Freeport,on February 3rd 2015, with engaging in gainful occupation contrary to Section 29 (1) an (2) of the Immigration Act.