Man Gunned Down Hours Before His Birthday 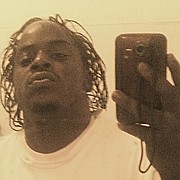 Tarino Tucker, who is believed to be the latest murder victim.

A MAN was fatally shot multiple times early yesterday morning while visiting a friend in Bamboo Town – just hours before his 28th birthday.

The murder happened around 9.30am on New Hope Drive, off East Street South.

Assistant Superintendent B K Bonamy Jr, head of homicide investigations at the Central Detective Unit (CDU), said police were called to the scene after residents reported hearing gunshots in the area.

“Police control room reported a male being shot in front of a house at New Hope Drive in Bamboo Town. Officers responded and met the lifeless body of a male behind a wall. EMS responded and confirmed the person had died,” he said.

“Upon our arrival, (police) met the deceased behind a wall, like I said, with multiple gunshot wounds to the body. Our information is that he walked from home and went to a friend’s house and while sitting on a wall using his cellular phone, a male approached him wearing short pants and a grey hood. He produced a handgun and fired several shots at the victim.

“He tried to run, but was killed on the scene. We are now speaking to friends and family to determine the motive. We know some persons were around when it happened and fled the scene, we are hoping they come forward.”

Police have not officially identified the victim, but The Tribune understands he is Tarino Tucker.

Tucker is the fourth person who was killed since Saturday.

On Sunday evening, police reported that a man was found slumped in a car in the Fox Hill area with gun shot wounds.

Earlier that day, police reported that Latovia Vincent, 31, was found dead in her home in Exuma with apparent wounds to her neck. Her husband is helping police with their investigation.

On Saturday, an elderly man was stabbed at his home following a reported domestic dispute. The victim, Omowale Karamo, 71, was a retired teacher who spent decades working in the public school system in Grand Bahama.

His 30-year-old son-in-law is helping police with the investigation.

Nassau is war zone the government is a joke and so are the residents if they all work together they can stop this kind of behavior at any time, but to tell you the truth some Bahamians have come accept this as normal behavior and that is a sad state of mind These kids are so numb that it's hard to be leave that they are human they are like Predators and everyone els is pray this is psychology animal behavior that needs to stop if there is going to be a future to this nation.

I agree, but here in Freeport its almost just as bad, per capita its worst here. Murder counts here is 3. According to police reports murder was the only area of crime up...well its still climbing.