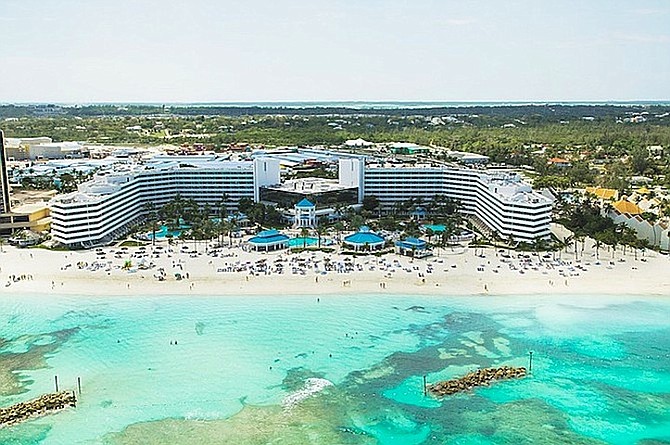 A SUPREME Court justice yesterday extended an injunction that prevents the Bahamas Hotel Catering and Allied Workers Union from engaging in industrial action over an ongoing gratuity dispute with the Melia Nassau Beach Resort.

He ruled that Melia had “succeeded in its application to extend the interlocutory remedy” until “adjucation of the issues in a trial.”

The extension of the injunction, which was obtained by Baha Mar and Melia executives last Christmas Eve, essentially continues to deprive the union of all industrial-related leverage in relation to the gratuity negotiations.

The ruling came two days after BHCAWU Secretary General Darren Woods told The Tribune the union was “optimistic” that the ruling would have been lifted during the third hearing on the matter yesterday.

“In my judgment, therefore, the balance of convenience favours the maintenance of this injunction until adjucation of the issues in a trial,” the judge said. “The result is that the resort has succeeded in its application to extend the interlocutory remedy until the trial of this action.

“The cost of this application is reserved until the final disposition of this matter in the Supreme Court. The parties are to attend at the Registrar of the Supreme Court to fix a date for case management and trial. Counsel for the resort (is) to prepare, file and serve formal order.”

According to the official ruling, Justice Jones’ decision was based on one “simple issue,” which was: “Whether or not on balance, more harm will be caused to one side or the other by extending this injunction until the trial than by discharging it.”

Largely though, Justice Jones’ decision was – based on evidence provided in the judgment – made on the “likelihood of unlawful industrial action by the BHCAWU” as opposed to the “damages from an industrial unrest at the resort,” which he said would be “enormous, difficult to assess.”

He said it was “unlikely that the BHCAWU would be in a position to pay them if awarded at the trial.”

He added: “The dominant factor in whether to extend or discharge this injunction is the balance of convenience and the basic principle is ‘that the court should take whichever course seemed likely to cause the least irremediable prejudice to one party or the other.’ It is hard to guess the actual cost, but the resort has shown the high probability of catastrophic financial losses if unlawful industrial action is taken. They have also shown the likelihood of unlawful industrial action by the BHCAWU if this injunction is not extended.

“On the other hand,” he argued, “the BHCAWU cannot show significant inconvenience if they are restrained from striking. If, at the trial the dispute is determined in favour of the BHCAWU, the resort has the money in escrow to pay the damages awarded. The issue to be determined at trial has great significance to the hospitality industry as a whole and any unlawful industrial action can affect the entire industry in particular and the national economy (of the Bahamas) in general.”

Attempts to reach both Mr Woods and Baha Mar’s Senior Vice-President for Government and External Affairs Robert “Sandy” Sands were unsuccessful up to press time.

Two months ago, Melia officials announced a reduction in the standard 15 per cent gratuity rate because it is moving to an all-inclusive model where food and amenities are covered in one price.

Baha Mar said it was forced to cease the normal gratuity payments at the Meliá but only after 10 months of failed negotiations to bring an agreement with the union on a new arrangement.