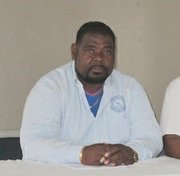 JOHN Pinder, National Congress of Trade Unions Bahamas President, has praised the government’s recent passing of the National Tripartite Council Bill as a “step in the right direction” on addressing labour issues in the country.

Mr Pinder also said the government needed to consider raising the minimum wage in the country to $350 a week.

Mr Pinder’s comments came after the National Tripartite Council Bill, which seeks to foster better relations with employers, trade unions and the government, was passed in the lower chamber of the House of Assembly on Monday.

He also spoke after Labour Minister Shane Gibson, in outlining the government’s priorities as it relates to Bahamian workers, told the House of Assembly that a minimum wage increase and redundancy pay reforms, top the government’s agenda.

Last month, Immigration Minister Fred Mitchell said he was “lobbying within the government” for a “livable” increase in the minimum wage.

During an interview with The Tribune on Tuesday, Mr Pinder said the bill’s passing was “definitely the way forward” in creating smoother labour relations in the country.

“This social dialogue is what the International Labour Organisation (ILO) has been speaking to for a number of years,” he said. “In their convention, it is expected of our government since we signed on to that convention to put this in place, so this is a step in the right direction, this calls for better consultation.

“Whereas in the past they can go in the (House of Assembly), present a bill and send you a draft copy of the bill for commencement, with this, anything relating to the workers in the country, we should have some input, along with the employer and the government. That in my view calls for a more transparent way of doing business and more transparent policies, guidelines and procedures.”

The National Tripartite Council Bill is designed to eliminate the miscommunication and uncertainties that have plagued Bahamian workplace relations in the past through having nine permanent representatives.

To make up the tripartite, officials told Tribune Business that the private sector, trade unions and the government would each nominate three persons to sit on the council.

Regarding minimum wage, Mr Pinder said: “We believe the government needs to consider at least $350 as a minimum wage, as a livable wage, so that persons are able to live above the poverty line and keep a meal on the table. Maybe the public service can afford the $350 a week, but maybe the private sector should have a minimum wage of $300.

“In that, there’s some trades in the private sector that may not want to pay the $300, but it should be between $300 and $350, because people can’t really survive on less than that.”

$350 a week? Get the #(#@ out of here...might as well shut the country down cause all the businesses will be closed.

Comrades I agree the economy couldn't possibly pay workers a livable $8:75 an hour wages, cuz that would leave less for Carnival 2015, to pay Janet Jackson, or her kind, a most ridiculous performers fee of 1.5 million dollars?

Well you know what they say... reach for the stars and you may hit the clouds.

Sadly. Comrade Jackbnimblem, for the minimum wage earners - the only time they get see stars are in the darkness of the night, after BEC locks out their lights meters, for non-payment they bills.
First, one law partner granted foreigners the right to block-off the natives access to our beaches . And now, the second law partner is allowing Carnival 2015, to price entertainment admissions out of the affordable reach the natives. .Now, you get a better understanding, why we need to change the how and who we elect to represent the people. Represent the people, what a damn sham of a joke.

The minimum wage should reflect productivity levels.There are some people who should be making $120 per week.

Oh my Dear Comrade 'Red shirt" Deddie, why not throw in, that some people, not that i know who are those "some people," ...... are too damn '"lazy?.. But still ,I'm impressed by your generosity to be willing to pay big ass, grown man's and woman's, a whopping $3 for a whole 60 lazy minutes of adulterated laziness.

Has John Pinder ever ran a business in his life? Or has he ever had serious conversation with anyone who is in business? A minimum wage of $350 a week will paralise this country to the max. Imagine janitresses, filing clerks and messengers and filing clerks earning this salary. Then imagine the food stores the fast food restaurants gas stations and other retail stores trying to pay entry level employees this amount. John Pinder is way out of touch. Minimum wage should be around $175.00 per week. And don't tell me about the single mother with three children: she has options make the daddy's pay child support (2) improve her own learning skills (3) do not have three kids while you still earning minimum wage!

Wages should work with the economics law of supply and demand. If you have 100 people looking for one job - the boss can afford to pay $4 per hour. You don't want it? No problem, I got 99 other people here wanting it.

People need to consider this when they bring children into this overpopulated world. Where are YOUR children going to find a good job? How are they going to compete with the Chinese who get paid 2 bowls of rice per day (no money), and are grateful that they don't go hungry?

These are the people our Govt is letting come in here to compete with us. Are you willing to work for only 1 and a half bowls or rice? Then you will get the job instead of the Chinaman.

an old, tradidional chinese greeting was :

have you eaten today?

Why are you guys letting these companies come into your country and paying you slave labor 350 a wk is only 8.75 an hour that's less than the kids make in McDonald's in America less than the tourist pay for there drinks you guys should not be working for no less than 450 a week that's 11.25 a hour come president fight for your people you know how much these hotels make a annually days of slave labor is over, what are they going to do take hotel and go back to America you guys hold the trump cards play them.

Island transport is a paid lackey

I don't mind paying 450 for 'SKILLED' labour...sadly most of our job applicants can't even read or write to fill out a job application properly, so am I going to pay that person 350-450? Hell no!!

This is one of the reason why Bahamians can not get ahead in life because you so small minded and petty if you think think that your not worth it then why should I think you are, if you don't stand for something you will fall for anything at the end of the day if you did not pay attention in school who's problem is that.

A lot more Bahamians"get ahead" than you think,in fact I can think of many who could probably buy and sell you many times over, and not all of us not so wealthy settle for a paltry 8.75 or 11.25per hour. You are conveniently overlooking the fact that we have the same problems here that you have in inner city Detroit or Chicago, only your government uses tax payer money to pay them a princely sum to stay home and make more welfare dependents. Whatever country you live and work in you get paid what you're worth, you can't make a silk purse from a sows ear, a rose by any other name is still a rose and you shouldn't have to pay for a rose when you're getting a weed.

Themessanger I hope that you are not a business owner if your are good for you, but if I still lived in nassau I would not patronise yout business, you are one of those people that I was speaking about not paying atention in School your grammer is lacking you sound pretty dumb, I was speaking about the Hotels not bahamian owne business, if you were paying atention like you should have like in class we would not be have this conversation and do not talk about the tax system if you don't understand how it works because if you were a tax payer you would most likley be able to read properly it pays for the school system and a lot more things in the country, if you live long enough to retire then you wil be eligible for social security, like if you are unemployed and worked for 49 months before you lost your job you can collect unemployment for the next six months so don't speak on things you know nothing about, so pick a book and read maybe it will help, you are never to old to learn sharing is caring. Reading is Fundamental