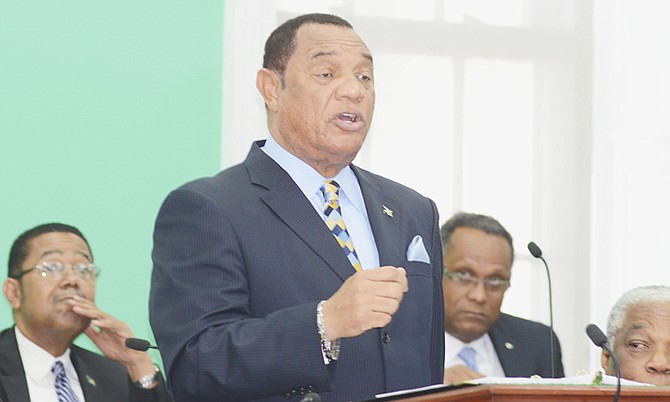 PRIME Minister Perry Christie this week acknowledged that the country's minimum wage is "not enough" but said the government would raise it "incrementally" as "circumstances would allow".

Mr Christie said the government would use "indicators of the economy as they are" as its guide to increasing the minimum wage. However, he did not specify the figure the government was looking at for the increase.

Mr Christie's comments came in response to calls from National Congress of Trade Unions Bahamas President John Pinder for the government to raise minimum wage in the country to $350 a week.

Mr Christie's comments also come after Labour Minister Shane Gibson, in outlining the government’s priorities as it relates to Bahamian workers, told the House of Assembly that a minimum wage increase and redundancy pay reforms, top the government’s agenda.

Additionally, Immigration Minister Fred Mitchell said last month he was “lobbying within the government” for a “liveable” increase in the minimum wage.

"As much as my heart tells me we have to do the best we can for the average Bahamian and the Bahamian that is at the bottom of the totem pole so to speak, we have to do it on the basis of what our circumstances would allow," Mr Christie said on Thursday. "We just introduced a new taxation system, VAT. We don't know yet what that is going to bring us. We put it bare minimum, 7.5 per cent, so we don't know yet what that will attract to us.

"The first indication will be when we go to budget in May of this year, when I will be able to give the country an idea of what we're able to do. The government at this time is still finding it difficult and has asked unions to accept packages that do not include a rise in pay.

"Those are the circumstances we face, and though I have indicated we have turned the corner, that is the promise of investments to come. So I can't base my view on minimum wage on what has not happened. I have to use the indicators of the economy as they are, to guide us on what we are doing.

"We have increased it now. It is not enough, obviously, not even enough for us, but we are going to do so incrementally as our circumstances allow us to do so."

Earlier this week, Mr Pinder called for the government to consider $350 as a minimum wage so people would be able to "live above the poverty line and keep a meal on the table".

"Maybe the public service can afford the $350 a week, but maybe the private sector should have a minimum wage of $300," Mr Pinder said. “In that, there’s some trades in the private sector that may not want to pay the $300, but it should be between $300 and $350, because people can’t really survive on less than that.”

Last year, Trade Union Congress President Obie Ferguson said a a 100-133 per cent increase in The Bahamas’ minimum wage was a “reasonable” request, and also lobbied for the minimum wage to be increased to $300 to $350.

"You really can’t expect a family of two, or possibly four, to live off $150 a week," he said last year. "We are prepared to take a stand to support the workers and ensure that they are in a  better position. We believe that  $300 to $350 a week will do that.”

The proposed minimum wage increase has sparked mixed reaction in the private sector. Rupert Roberts, Super Value’s owner, has said he would be in favour of raising the weekly rate by 33 per cent to $200, and would adjust salaries at the lower end of the supermarket chain’s pay scale accordingly.

However, Robert Myers, former Bahamas Chamber of Commerce and Employers Confederation chairman, expressed concern that such a rise would spark pressure for similar salary increases throughout the economy - especially in union-dominated sectors.

Why you need to wait &gt; Every chance you get you shouting how good the economy is doing under your administration. You cant have it both ways . He is a moron

Christie really does know how to screw the honest hard-working members of the electorate. Takes all that shiny VAT money under the promise of using it to pay down the debt, but instead he'll force the minimum wage to go up (to adjust the wages of the lower paid members of the public for the VAT he is stealing from them) Then what's the betting that he will authorise MP's, teachers, police, firemen and all other Government workers a huge 7.50% pay increase in the near future. Guess who are the only ones who get screwed ? Yes, the middle class, who pay and pay and pay their VAT, only to see it squandered by this useless man and his cronies

He is only doing this to give Haitians extra money to cover the VAT they are now having to pay on rice and turkey-fly.

This man has no idea of economics. He does not appreciate that with Vat, and all the increased fees that the Government as singlehandedly increased the cost of living by 10%. All of this is making it much more difficult to run, let alone start, a business.

Business is how you create jobs. If you increase the basic wage, at this time, it is unlikely that the Government will ever get a grip on unemployment.

All this leads to more suffering for the Bahamian people.

Not for the PLP ......... they are looking for foreign hand-outs and deals to create JOBS for the regular Bahamians. There is NO government plan to empower domestic business development in any of the big 3 sectors outside of what "the Boys" own right now ............ SAD. Its not in the best interests of the Bahamian political ruling class (PLP,FNM,DNA etc)

When one looks at what the government has been doing, that's about the only conclusion one can come to.

Sometimes my idealism makes me forget that not all governments look out for the average man in the street.

Thanks for the reality check.

Promises, promises and more promises!!! For the love of God, stop making baseless and insincere promises to the electorate!!! Mr. PM, you have no intention of raising the minimum wage, so please do us all a favour -- RETIRE IMMEDIATELY!!!!

It would be nice to have some representatives who actually live in the Bahamas the rest of us do!!!