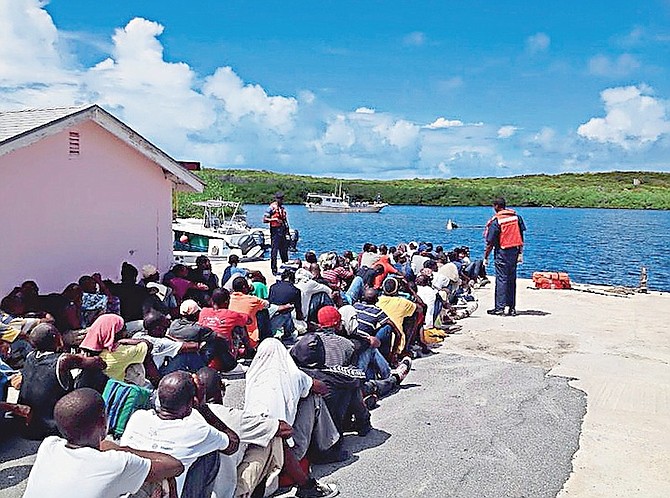 Immigration policies have been under the spotlight recently, and the Grand Bahama Human Rights Association is to address the Organisation of American States after requesting a hearing.

THE Organisation of American States has granted a local human rights group an opportunity to be heard, in a month’s time, on the controversial implemented immigration policies.

The Inter-American Commission on Human Rights, an autonomous branch of the OAS, responded in the affirmative to the request of the Grand Bahama Human Rights Association and two other international human rights organisations, for a hearing on the government’s new immigration enforcement policy, launched in November.

However, Foreign Affairs and Immigration Minister Fred Mitchell told The Tribune yesterday that the hearing in Washington, DC, on March 20 “is a matter which has to be decided by the wider government”.

“The fact that it is brought in part by the Grand Bahama Human Rights Association, which is a thoroughly discredited and disreputable organisation with individuals who have lost all sense of reason and patriotism, might weigh in the response and the Ministry’s recommendations to the Government,” Mr Mitchell added.

“But it is not something that will or should be decided by the Foreign Ministry alone,” he noted.

The GBHRA issued a statement over the weekend on the OAS’ approval of the group’s request for a hearing to refute specific statements made by Mr Mitchell in a special meeting of the OAS Permanent Council in December.

“It has been the contention of the GBHRA that the policy violates the fundamental rights of individuals and denies them due process in contravention of Chapter 3 of The Bahamas Constitution. GBHRA president, Fred Smith, QC, will lead the delegation to Washington, DC, on March 20, and testify before the Commission. His evidence will include several specific instances of human rights abuses under the new policy” their statement said.

The GBHRA, in their request to the OAS in January, had also promised to expose alleged human rights abuses, procedural violations and unlawful detention exercises that they believe have characterised the government’s new immigration enforcement policy, launched on November 1, 2014.

In its joint request, the groups stated: “Amidst reports of indiscriminate raids and arrests and ill-treatment of immigration detainees at Carmichael Road Detention Centre, as well as the roundup of persons suspected to be irregularly residing in The Bahamas, we are motivated to request a hearing before the IACHR to address the human rights violations resulting from the implementation of this new immigration policy.

“A thematic hearing on this topic would also allow us to highlight the intersectionality of discrimination based on race, nationality, and socio-economic status by law enforcement and in the Bahamian justice system.”

The statement pointed to similar concerns raised in 1987 over “similar violations”, adding that the current environment was part of “a decades-long pattern of human rights abuses, periodically exacerbated by successive governments’ intent on stoking the fires of popular anti-migrant sentiment to achieve political ends”.

The group plans to make presentation on negative impact of the policies; claims that detentions are on a case-by-case basis; the targeting of Haitians and tacit encouragement of widespread discrimination; mischaracterisation of conditions at the main migrant detention centre; and claims of physical abuse, mistreatment and unlawful detention since November 1, 2014.

Mr Mitchell delivered a multi-layered defence of the government’s new immigration policy during his address before the OAS on December 16.

The special meeting, held in Washington, DC, was scheduled at the request of Mr Mitchell to address what he has called misinformation about the new immigration restrictions.

Mr Mitchell told the OAS the government’s policy and actions should not be surprising to anyone given that the Progressive Liberal Party announced the plans during the lead-up to the last general election.

This is good for Fred Smith. Once he has made a fool of himself there. and those organizations see him for what he is . He just may take a break, the Truth is the Bahamas has been good to the people of Haiti. but it is impossible to absorb the boat loads of people coming just about every day. something has to be done about illegal immigration , even if Fred smith does not like it. We know the more people come the more people he will have to start his Haitian party. But he himself said he has enough people to start his party. what more does he want.

I still can't figure out what's controversial about wanting to know, document and provide status to all undocumented persons living in the country. And subsequently return those without legal status to their native homeland or that of their parents. Only someone who has no concern for the Bahamas, would feel otherwise. Fred Smith and the OAS should stop wasting their time, and instead focus on the epicenter of human rights abusers of Haitians - none other than Haiti. That would resolve the issue for all.