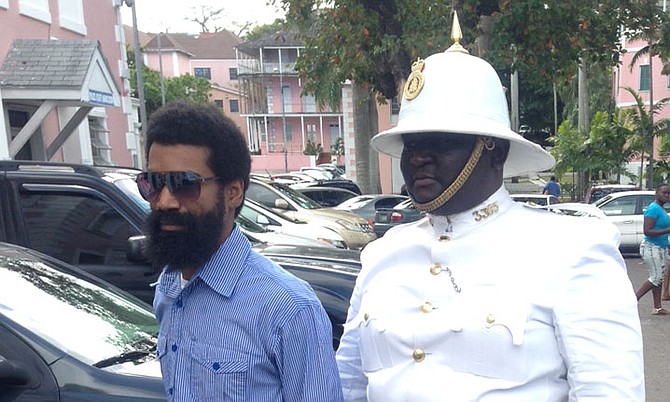 A MAN’s conviction and 48-year-prison sentence for a decade-old murder was overturned by the Court of Appeal yesterday.

The judges determined that there was no evidence adduced establishing the appellant was the shooter having considered arguments from appellant and Crown respondent.

The proceedings lasted a little more than 30 minutes.

The court’s decision evoked emotional reactions from relatives seated at the back of the Claughton House courtroom.

following an argument at a party in Yellow Elder Garden. A witness had claimed that Marshall returned with a 9mm pistol and shot Joffer.

Prosecutors said that Marshall’s flight from the Bahamas to the United States by illegal means was evidence of his guilt.

Marshall was deported from Philadelphia, Pennsylvania, in February 2011, some five months after being arrested in Philadelphia on an assault charge that stemmed from a fight with another man.

Marshall maintained that he was a victim of mistaken identity.

His trial-lawyer, Ian Cargill, noted that investigators had failed to establish which of the men named Jason at the party was responsible for the shooting because they did not hold an identification parade.

In yesterday’s substantive hearing Mrs Farquharson-Seymour began her arguments with an outlined of the facts of the case adduced at the trial.

Around noon on the day in question, Joffer, Jason Williams, Trevor Whitfield, were “hanging out” at a house when a man in a burgundy coloured Nissan Maxima pulled up inquiring about a woman named Raquel.

Around 6pm, the woman, Raquel, came home and appeared upset at the gathering in her yard. She had an exchange of words with Whitfield regarding his confrontation with her boyfriend “Jason”, who got out of the Nissan Maxima indicating his intention to “get a tool.”

Nearly an hour later, the “Jason” in the Maxima returned and went in the direction of Whitfield, Williams and Joffer. Whitfield ran into the house after “Jason” pulled out a gun.

Moments later, he returned outside and saw Joffer lying dead in the street.

“Trevor Whitfield died in July 2005, but his statement was read into evidence at the trial,” said Farquharson-Seymour.

“Was there any evidence of a witness to the shooting?” Justice Allen asked. “No,” said the lawyer. Williams, the lawyer said, had testified at the trial, but the only description he could give of the man with the gun was that he was “brown skinned.”

“I can’t say if he is tall or short because that’s my first time seeing him,” the lawyer read from the transcripts.

“Was there an identification parade after the incident?” Justice Allen further probed.

The appellant’s lawyer, again, said no.

“What of the young lady Raquel?” Justice Isaacs asked. Farquharson-Seymour replied that “she never came and gave evidence.”

Marshall’s lawyer added that even after her client was handed over to Bahamian police by US law enforcement, “there was no mention of Raquel when he was interviewed in police custody.”

“The nearest we come to Raquel is the evidence of her cousin, Dario Smith,” she said, who described her cousin’s boyfriend as bright skinned and six feet tall.

“We never got evidence of the last name of Raquel’s boyfriend or even an alias,” the lawyer added, emphasising that there were only two descriptions of the Jason adduced at trial.

“In trial, Smith was asked if he saw the shooter in the court. He said he didn’t,” Marshall’s lawyer further noted.

“It was just bizarre reading these transcripts,” the lawyer said, adding that the prosecution based her client’s guilt on the appearance that he fled the country.

Justice Conteh asked Crown respondent Linda Evans for the evidence adduced to link the appellant to the Yellow Elder Shooting.

“The only evidence really is that of Mr Trevor Whitfield,” Evans replied.

“He’s talking about Jason, but there were two Jasons” Justice Conteh noted.

“Is there any evidence who could say that Jason Marshall was Raquel’s boyfriend?” Justice Allen asked.

“Why wasn’t a statement taken from Raquel? Even if she couldn’t be found for trial, the police should’ve taken a statement,” Justice Allen noted. Justices Conteh and Isaacs were in agreement that the police fell down in doing due diligence.

Justice Allen asked Farquharson-Seymour for the length of time that her client has been in prison.

Marshall, the lawyer said, had been in prison for a year before getting bail ahead of trial and was re-incarcerated since April 2014 after being convicted.

“Is your Lordship minded to consider compensation?” Farquharson-Seymour asked.

“You know what you have to do. We can’t consider compensation on a criminal appeal,” Justice Allen replied.

“We find the conviction unsafe and we allow the appeal and squash the conviction and sentence,” the court added, further ruling that Marshall would be released following the completion of a release order.