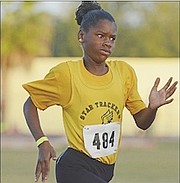 WITH a change in policy for the selection of the team for the CARIFTA Games, at least five athletes made sure that their tickets were booked for the trip to St Kitts and Nevis April 2-4 when they competed at the T-Bird Flyers Track Classic in the original Thomas A Robinson Track and Field Stadium over the weekend.

The meet was the second for the year on the BAAA calendar, but the first one that featured all of the disciplines, following on the heels of the Odd Distance meet on January 3.

“It all shows how much work the coaches - Bradley Cooper, Dawn Johnson, myself and Ronald Cartwright have put in for these athletes to qualify under the new standards implemented by the BAAA,” said coach Corrington Maycock. “It shows that these kids can put in the work when they need to, pending the situation that they are in. Nobody wants to be left at home.

“So the only thing for them to do is to step up or stay home. So they stepped up with the new standards implemented. With the new standards, we expect to have at least 4-5 more athletes make the standard. So that is what we are looking for. We’re right where we were with outright qualifiers from last year.”

The Bahamas Association of Athletic Associations has announced that this year, only athletes who attain the qualifying standards will be eligible to make the team that will represent the Bahamas at the 2015 Carifta Games in St. Kitts and Nevis over the Easter holiday weekend.

Like they did last year, the coaches will put on another throwers meet on Saturday, January 24, starting at 9am at the College of the Bahamas. The meet is intended to help assist those athletes who have not qualified to make the standards before the deadline at the final Carifta trials at the original Thomas A Robinson Track and Field Stadium from March 20-21.

Adderley, who posted a personal best in the shot put, said he was quite pleased with his performance. “I felt I did good, but as the season progresses, I hope to continue to improve,” said the 16-year-old 12th grader at St Augustine’s College.

“I just have to concentrate on my technique and getting my steps right. Having qualified now, I have plenty time to get better.”

At last year’s Carifta, Adderley came fourth in the shot put, just barely missing out on a step up on the medal dais. He indicated that if he can continue to improve, he should definitely earn a spot this year.