Pilots Must Start Their Defence In Drugs Case 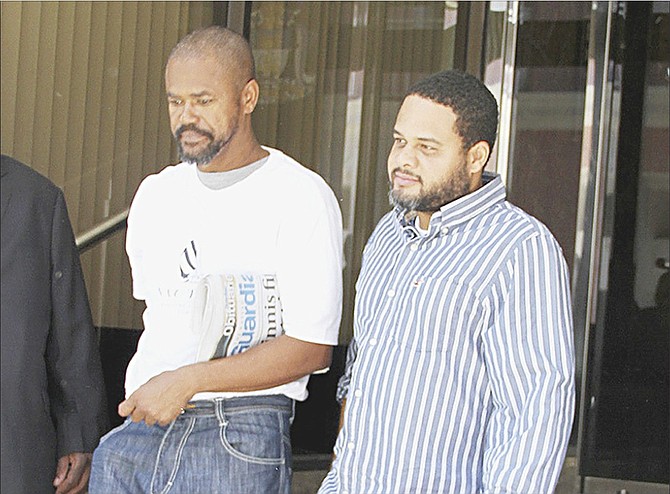 Murillo Sullivan, left, and Darryl Bartlett, at a previous hearing.

TWO Bahamian pilots were informed by Magistrate Andrew Forbes yesterday that they must begin their defence against allegations of their involvement in a $1 million drug seizure in five days time.

Darryl Bartlett, the 38-year-old son of a senior official in the Attorney General’s Office, and 49-year-old former policeman Murrilo Sullivan, are now scheduled to reappear in Magistrates Court on January 20 for the continuation of their case that was adjourned in October.

At the previous trial proceedings, Acting Director of Public Prosecutions Garvin Gaskin closed the case with the testimony of investigating officer Inspector Weymond Demeritte concerning the crimes alleged to have been committed on April 7, 2014.

Following this, Murrio Ducille, lawyer for both men, argued that the Crown had failed to make out a prima facie case against the accused.

Mr Ducille noted that the drugs were found in the cabin of a plane, not in its cockpit, which was owned by someone else.

In response, Mr Gaskin said there is sufficient evidence to require Bartlett and Sullivan to present a defence to the charges.

Their passenger on the plane, 24-year-old Michael Webster of Quebec, Canada, pleaded guilty to the charges he faced and was jailed for four years in July.

Officers and administrators of the Drug Enforcement Unit acted on a tip that led them to the Executive Flight Support section at the airport. A search was conducted of a Hawker Jet that had just arrived from Montreal, Canada. During the search, officers found four suitcases containing 149 lbs of marijuana, 17.4 lbs of ecstasy pills and 2.6 lbs of Hashish oil.

The pair, who face up to seven years in prison if convicted, maintain their innocence.

In my opinion, http://shinydissertation.com/">shiny dissertation service can be a nice idea for you! you will find there new topics for posting this is a very much useful link for students and writers! Just see it

This plane was loaded! Webster will be out in no time and I'm almost certain these guys will get a slap on the wrist without being sentenced!