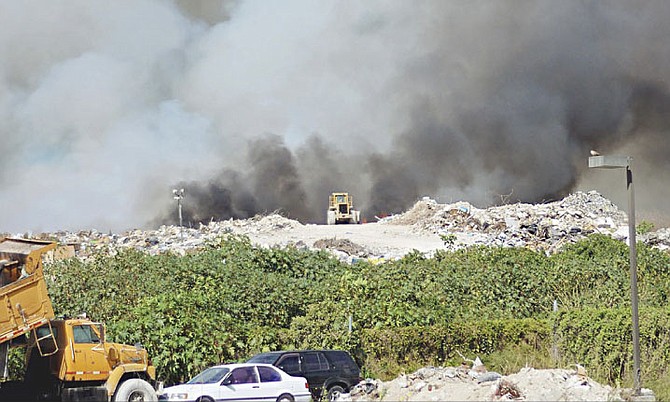 A FIRE that started over the weekend at the New Providence Landfill was caused by a “concentrated arson attack on the site and facilities,” according to officials from Renew Bahamas.

In a statement released yesterday, Renew Bahamas, the solid waste management company responsible for operating and managing the landfill, said its “sources and surveillance” indicated that individuals “entered the landfill after sunset (on Saturday) and deliberately started the fire.”

The company said residents in the surrounding community may experience “discomfort” over the “next several days” as officials continued to battle the blaze that continued to rage up to press time.

The company’s statement comes after two fires on the northern and southwestern areas of the property were reportedly sparked at the landfill shortly before 11pm Saturday. As a result, persons living in the immediate Gladstone Road area and some in nearby Flamingo Gardens could see and smell the effects of the blaze.

Fire Chief Superintendent Walter Evans, when contacted yesterday, urged persons living near the landfill, such as residents of Gladstone Road and Victoria Gardens, to “seek medical attention” if experiencing ill side effects from the smoke emanating from the site.

“The fire was started shortly before 11 pm Saturday, on the northern side of the property and within an hour it was rapidly spreading,” the company’s statement read. “Shortly after, another fire started up in a completely separate part of the site. We are satisfied that this second fire is not spreading.

“We believe this latest incident indicates a concentrated arson attack on the site and facilities, as our sources and surveillance indicate individuals entered the landfill after sunset and deliberately started the fire. Work crews were immediately mobilised to combat the blaze. Meantime residents in the surrounding community can expect some discomfort over the next several days from the smoke, as wind continues to pose a challenge.”

Supt Evans said the fire department was working with Renew Bahamas to combat the fire.

“The residents in the Victoria Gardens and Gladstone Road communities, all those persons may feel some effect, so we do encourage persons who are in that area to seek medical attention if they have any health issues as a result of the smoke which is being emanated from that site,” he said.

A resident looking from her balcony at the Towers on Cable Beach said that from where she stood it “appears to be a terrible inferno.”

Fires at the city dump have been a persistent problem for years.

Last March, a fire burned at the dump for several weeks, causing school closures and discomfort for nearby residents.

when will these dummies have some sort of control over the dump and/or seek alternatives?

They won't...but HEY...we are paying a pretty hefty environmental impact fee with a good number of bulkier items that we import so that the landfill gets the $$ it needs...guess that was just another great idea for $$ to fill politicians pockets...

Renew Bahamas, since we don't know anything about your "deal" with government we can only assume that you are as incompetent as those that ran the landfill before you.

Arson sounds like an excuse. Furthermore, if you found out so quickly why did you not extinguish the fire at once.

Tell us how you have run the Landfill differently, since you took over, so that fires would not break out.

Renew Bahamas, Stellar Waste ................ LOIs and MOUs cant done and still Nassau on fire. This is the latest BEC-like debacle .............. There must be serious Public Accounts Committee investigations into all of these "hologram" companies operating as fronts for politically-connected persons

Renew is another political zit on the face of the Bahamas. These people where given the dump over BAHAMIANS. One wonders why we need a foreign company to do what BAHAMIANS could have done. OH, sorry I forgot they have some Bahamian shareholders, who could that be? Once again those in power abuse the system and the people of The Bahamas get the short end of the stick.

Something about that Landfill has a very bad smell, and it is not the garbage. But, as they say, "Where there is smoke, there is fire".

apparently there is absolutely NO intelligent persons involved with or in charge of this crap! An absolute disgrace to the country....there is a number of simple solutions to solving and/or preventing fires in the land fill....either the government is too stupid, the company running is incompetent or they both don't care, or worse.....!

Why would anyone start a fire at the dump?

After the string of fires the last year, Renew can't be serious with that stupid statement...

RENEW - ought to be introduced to these little thingies a lot of gas stations and other businesses have called CCTV cameras. They are pretty cheap and a security booth at the dump gate could be equipped with numerous monitoring screens to monitor the whole thing 24/7.

Oh - wait - have you seen the "security booth"? It looks like somebody was in the midst of building an old-style 1920's out-house and a Cabinet Minister must have been passing by and said "Hey, wait a minute - I bet that would make a pretty darn good security booth. Hold your horses there fella."

You tend to wonder if the operators used the fire to get rid of excess waste...just saying

Exactly. Why would anyone waste expensive gas to burn garbage at the dump? A little bit of gas and fire will save a lot of gas for the bulldozers burying the crap. Just like in the restaurant business, a little arson can go a long way to improve the bottom line. The owners are arson around on this one.